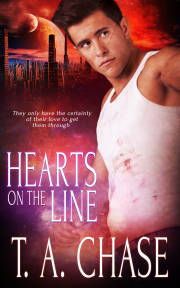 Hearts on the Line

Baxter and Addison are meant to die, but their love for each other won’t let them choose that future.

In 2134, the United States of America no longer exists as the super power it once was. Americans fight to keep from being completely conquered by their enemies. Scientists have begun to genetically engineer soldiers to fight the war. These men are stronger, faster and more impervious to injuries. The soldiers are created in labs, then once they are birthed, they are shipped to compounds where they are trained from their very first breath to fight.

Baxter and Addison are two such soldiers. They are from different compounds, but they serve in the same unit. Baxter isn’t the most intelligent, and he knows it. His job is to kill the bad guys, and not to do anything else. Addison understands his place in the world, but he finds he wants more at times. He doesn’t want just to be a killer. He wants to have some other kind of life, and he’s discovered that he wants his life to be with Baxter.

When their unit decides to make a desperate run for the border and freedom, Baxter and Addison only have the certainty of their love to get them through the dangers they are about to face.

“Lieutenant Addison,” the captain shouted across the room.

Addison glanced up from where he sat with the rest of his unit. They’d arrived at the forward base an hour ago and had been told to wait in the main room for their orders. His men were stripping their gear, making sure everything was in proper working order and ready to go.

“Yes, sir.” He walked over to where the captain and the other superior officers gathered.

After saluting, he stood at attention, waiting for the captain to acknowledge him. There had been times when higher-ranking officers had made him waste hours while they talked about trivial shit. Addison fidgeted in his brain, not having the patience for assholes playing mind games. Yet he knew the punishment for not obeying orders, so he had to pay his superiors respect whether he liked them or not.

“Sorry, Addison. Had some last-minute supply lists to go over.” Captain Tilton turned to him after only five minutes.

“No problem, sir.” Addison wasn’t about to complain. Not without knowing Tilton’s personality.

The human officers in the army didn’t always like dealing with the genetically engineered soldiers. The GE soldiers were stronger, faster and more intelligent than ‘true’ humans, which bred resentment among the humans.

There was nothing Addison could do about it, except deal with the games the Trues played with him. It annoyed him—he’d never asked to be genetically created for war.

He would reserve judgment on Tilton and the other humans at the base until he’d been there longer.

“I need you to take your unit into Section Eight.” Tilton pointed to the map pinned to the wall.

Addison took one step closer, so he could check the access and exit points. Section Eight looked like it was the closest area to the demilitarized zone. The Unified European Army had started to make incursions into the DMZ, and the American Freedom Front was doing its best to keep them from gaining any more ground.

“Is there anything in particular you’re wanting us to look for?” Addison wanted to get all of his orders before he grabbed his men and headed out.

Tilton shook his head. “Nothing specific. I just want to know if there are any UEA around, or any evidence they’ve been there. We got some intel that the UEA has been making recon missions.”

Addison nodded. The UEA was becoming bolder and were moving into AFF territory. They couldn’t afford to lose any more, considering their backs were against the wall…or the mountain, as it were.

“All right, sir. We’ll gather as much information as we can and bring it back to you.”

“I know you will, Addison. The general told me you were the best unit for recon, and I trust his opinion.” Tilton nodded when Addison saluted him. “Go to the motor pool and get a couple of Jeeps.”

Addison turned sharply and whistled for his unit. All his guys came to their feet, and when he gestured toward the door, they headed in that direction. Baxter led the way, which didn’t surprise Addison.

GE soldiers were created in two kinds. Ones like Addison, who were meant to be the leaders of the units, were the intermediates between the Trues and the GEs. For the most part, Addison didn’t mind the pressure put on him, but at times he longed for a rest or a chance not to be in charge. The other kind was like Baxter. They were considered the brutes—or merely bodies to throw at the enemies. They did the grunt work of the military.

“Where are we going, sir?” Baxter asked as soon as he joined the rest of the unit.

“To the motor pool to pick up some transportation. Then we’re heading to Section Eight for some recon.” He glanced at Baxter. “Do you know where the motor pool is?”

Baxter nodded once, then motioned toward the west. “It’s on the west end of the base. I studied the map of the base while we flew in here. Also, I know the best way to get to our destination without bothering too many people. To be honest, sir, I don’t think we should take vehicles. We should walk in.”

The rest of the men didn’t say anything because ultimately it wasn’t their opinion that mattered. It was Baxter’s, and Addison trusted Baxter with his life, so they’d do as Baxter suggested.

“All right, gentlemen, we’re going to stop by the armory and make sure we have all the firepower we need, then we’ll be walking into the city, making our way to Section Eight. Once we get there, our orders are to look for any sign of the UEA or its agents. We have to find out if they’ve made it across the DMZ or not.”

The rest of the men headed off to the armory, and Baxter fell in step with Addison as he followed behind them. He managed to smile at Baxter without anyone seeing him. There were no rules about being friendly with his fellow soldiers, but he’d seen how other officers—True and GE—treated the grunts like Baxter.

Baxter was a GE as well, but he’d been created as basic cannon fodder to be thrown at the UEA during battle. While Baxter knew that was his purpose, he tried hard to become someone more than he’d been expected to be.

“What are your impressions of Tilton?” Baxter’s question was low.

“So far he seems okay, though I’m still reserving judgment on the man. He might be trying to lull me into believing he’s a friend when he’s really looking to get rid of us. Of course, I haven’t gotten to talk to him that much. We’ll have to see the longer we’re here. There aren’t that many GEs on this base.” Addison shrugged. “Tilton might not know whether he likes us or not.”

Baxter grunted, showing he understood what Addison was saying. Addison had seen how some of the Trues treated Baxter, like he was a robot that didn’t know anything and was only there to serve them. Addison hated his best man being made to think he was less simply because he’d been created, not born.

“We’ll get through this together, sir.”

They joined the rest of their unit at the armory. The quartermaster gave them all the ammunition they needed, plus a little more firepower than they’d brought with them.

As Addison led his men toward the front gate of the base, he called into headquarters, making sure the lines of communication were open.

Share what you thought about Hearts on the Line and earn reward points.