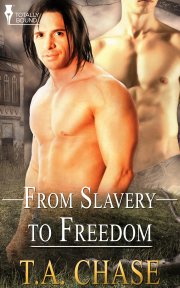 From Slavery to Freedom

Can a caged human learn how to be free, and break down the bars imprisoning a demon's heart?

Malachi has spent centuries as the bodyguard and head security guard for Andor, a master vampire. He's never concerned himself with the humans around him, seeing them as lesser creatures. It isn't until Andor falls in love with a human, that Malachi begins to see some value in them.

Since he was fifteen, Doll has lived in a cage, being used and beaten by humans and vampires alike. Some days, he's not even sure he's sane any more, but some hidden strength keeps him going on instead of begging for death.

One fateful night, Doll and Malachi cross paths, and it changes their lives forever.

Publisher's Note: This book is a sequel to Out of Light into Darkness.

Flashing lights and the pounding beat of music drove the humans in unusual rhythms called dancing. At least, Master Sven had told Malachi that that was what the humans called it. Malachi would call it strange and rather perplexing, if he were to ever really think about it. More often than not, Malachi ignored any human he might come into contact with, unless it was Master Sven, or someone who threatened the man he worked for. If that happened, he dealt with them swiftly and in deadly fashion.

He turned to see Master Andor approaching him. The way Andor moved through the crowd belied the fact that he was pretty much blind, and could only see the faintest differences between black and grey. Bowing slightly, he waited until Andor stood next to him before he straightened and spoke.

"Everything appears fine, Master. There are far more people than I would like, but I believe my men can deal with any trouble, should it become necessary."

Andor, the most powerful master vampire on the West Coast, nodded. "I wouldn’t expect Wilton to try anything. He knows I could crush him with a thought."

Malachi kept his gaze moving. His demon senses gave him abilities even vampires didn’t have—like sensing evil intent and thoughts—but just because he had them didn’t mean he could relax. Having a master like Andor, who didn’t forgive mistakes easily, meant that Malachi had learnt to never make any. It was easier on his body, because Andor believed in corporal punishment, which usually meant flaying strips of skin from Malachi. Being a demon made it impossible for him to die, but he could still feel pain.

Malachi hid his wince when Sven, Andor’s munr, spoke up. Sven was the only being in the world that the master vampire cared about, and being Andor’s munr, or heart, Sven tended to get what he wanted—usually. But something about the club and the meeting was putting Malachi on edge.

"Master, I would suggest keeping your munr close tonight. Master Wilton might not harm him, but I don’t trust the humans in this place." Malachi’s instincts told him something was wrong and he didn’t have time to check out what it was.

Andor seemed to study him for a moment, and though it was hard to tell when Andor wore darkly tinted sunglasses, Malachi knew he was reading his mood through the mental connection they had. The master vampire nodded.

"Not tonight, Sven. Once we are back on my territory, you can go out dancing whenever you wish."

The human pouted for a second before shrugging. "Okay. I know both you and Malachi have your reasons."

"The reason is you are my munr, and without you, I’d go back to the darkness I was falling into. I don’t want to go back there again. You are the centre of my world, Sven, and that makes you the most precious thing I own."

Sven narrowed his eyes, and Malachi knew Andor would pay for the ‘own’ comment. Yet, in vampire society, Andor did own Sven, and all the other humans in his herd. Outside Andor’s compound, no one knew that Andor didn’t drink from anyone except Sven. Over the year they’d been together, Andor had discovered he only had to drink once a month from Sven to survive. It kept Sven from being jealous, since Andor no longer drank from any of the herd. Maybe it showed a weakness in Andor, to settle for only one donor, but Malachi thought it had actually made Andor stronger. It had certainly helped him regain his strength, but his eyesight remained damaged beyond repair.

The club manager came up to them. "Master Andor, it’s a pleasure to see you. Master Wilton wishes for you to join him in his private rooms."

Malachi shifted his weight slightly, putting his body between his master and the manager. There wasn’t much that could kill Andor, but it was Malachi’s job to take a bullet, figuratively or even literally speaking, as Andor’s bodyguard.

The manager paled. It wasn’t often demons walked among humans, and the mortal probably hadn’t seen one quite so up close and personal. Malachi didn’t even curl his lip to show his fangs. The human wasn’t going to cause any problems.

"Take me to Wilton. I don’t like spending any more time than I need to away from my compound," Andor ordered the man, before offering his arm to Sven.

Malachi gestured for the other four bodyguards to surround Andor and Sven while he took point. If an assassination attempt was going to happen, they would have to go through Malachi first, and since he couldn’t die, it was idiotic to try it.

Their group cut a swathe through the crowd, pushing people aside like a tsunami wave. No one would dream of approaching a master vampire without his permission. To be honest, Andor was so powerful and old, he didn’t need Malachi around to keep him safe. Malachi was there to protect Sven, and to keep an eye on things while Andor slept each day.

The stench of human sweat filled Malachi’s nose and he resisted the need to sneeze. He hated how humans smelt as if their flesh was rotting slowly away, and how they didn’t realise they were dying second by second. He shot a quick glance at Sven, who walked quietly next to Andor, his eyes focused ahead of him.

This story was wonderful. It had me in tears a couple of times, but it also had me smiling and gave me that warm fuzzy feeling at the end too. I wish to see more in this series, hopefully with heart...

How Damon withstood the years of abuse and maintained his humanity was inspiring and proved how strong his will to live was. That strength was what initially drew Malachi to him, but it was Damon's...

Share what you thought about From Slavery to Freedom and earn reward points.