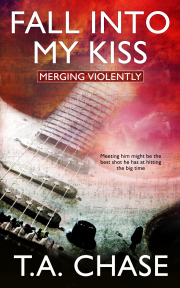 Fall into My Kiss

Book 1 in the Merging Violently series

Will Hunter’s life ever be more than an endless tour of small gigs?

Hunter Lee is lead guitarist of the alternative rock band, Merging Violently. He and his four friends travel up and down the East Coast, playing small gigs. It’s not what he dreamed of when he founded the band, but it’s a way to make a living. Meeting Edward Monterrose might be the best shot he has at hitting the big time.

Edward Monterrose doesn’t have time for a relationship. He’s too busy with his horses and students. Yet he always makes time for a benefit to raise money for charities he supports. While recovering from an injury, he overhears Hunter playing in the park and asks him to play at the benefit.

The two men come from different worlds yet discover they have more in common than they thought. Yet will their relationship last when they’re apart for months on end?

Publisher's Note: This book is linked to the Home series by T.A. Chase.

“Aren’t you getting a little too old to be falling off your horse?”

Edward Monterrose glanced up from where he’d been staring out of the window. He grimaced when the strained muscles in his back protested the movement. “It was an unplanned dismount. Apparently Salt thought there was a shark in the liverpool jump and wasn’t going to risk getting eaten by it. Yet he was willing to use me to distract the monster while he got away. Much like his father, Gypsy, did when he was competing.”

His stepbrother chuckled and Edward smiled at the happy sound. Ever since Derek had fallen in love with Max Furlo and moved away from Nashville, joy had seeped into everything Derek did.

“I finally got a chance to listen to your latest album. I think it’s your best yet,” Edward commented as he pushed to his feet to greet Derek.

Derek pulled him into a gentle hug then kissed his cheek. “Thanks. Can’t say I was happy to get a call from Scout saying you were in the hospital.”

Edward shuffled to his bed and accepted Derek’s help to climb back into it. “I’m sorry, but accidents are a hazard of the job. I was due to have a wreck at some point. It’s been a while since I’ve lost my seat like that.”

“You weren’t expecting Salt to freak like that. He’s been doing great since you both worked with Les.” Derek pulled a chair up next to the bed then sat. He leaned back, crossing his legs while he studied Edward. “I guess I was imagining the worst, even though Scout said you were going to be fine.”

“I won’t be riding until the doctors clear me, which sucks. I’ll have to withdraw from some of the big competitions and it’ll hurt us in the year-end standings.” He shrugged and winced.

Derek motioned to the cast and bandages. “What are your injuries? I didn’t ask Scout, just chartered a plane to get out here as soon as I could. Left Max at the ranch to hold down the fort while I’m gone.”

Edward snorted. “Hold down the fort? You make it sound like you’re the one running the place. We all know Max is the reason why the cattle and horse part of your ranch is successful.”

“You make it sound like I’m useless,” Derek muttered as he pouted.

“You’re useless when it comes to ranch work, brother. But you have other redeeming qualities. Your record label seems to be doing rather well.” He shifted on the lumpy mattress, trying to find a spot that wouldn’t cause his body to ache. Being covered with bruises made it difficult to get into a comfortable position.

“Are you going to tell me about your injuries?”

Wrinkling his nose, Edward sighed. “I broke three ribs and pretty much bruised every inch of my body on my left side from where I hit the ground. Also, I broke my left wrist and collarbone.” He motioned to the sling keeping his arm tight to his chest.

Derek cringed in sympathy. “Thank God it wasn’t worse, though you’re going to be in pain for a while.”

Edward nodded. “Yeah, but it’s happened before. I’ll be riding once I’m cleared.”

“Even with a broken wrist and collarbone?” Derek sounded skeptical.

“I’ve done it before.” Of course that was when he was younger and could rebound faster from an accident like this one, but he wasn’t going to tell Derek that. “I have too much to do to let this hold me back for long.”

“He’s doing fine. Didn’t do anything, though Scout says he’s acting a little embarrassed by the whole thing. As though he knows he did something wrong.”

“Silly horse. He’s been taking those jumps without a hint of trouble for months now. All of a sudden, he wigs out.” Derek shook his head.

Edward laughed then groaned. “I need to remember amusement hurts.”

A nurse walked in and smiled. “If you’re in pain, Mr. Monterrose, I can give you something for it.”

“No thanks. I can handle it.” He leaned back against his pillows, letting her check his bandages. “Has the doctor said anything about when I can go home?”

“I believe he wants you to stay one more night, then he’ll discharge you. Even though you were wearing your helmet, you did hit your head,” she pointed out.

Derek waited until the nurse left before he replied, “You’re the only member of my family I care about. When I hear you’ve been injured, I’m going to come and check on you myself. Now that I see you’re doing as well as can be expected, I’ll stay until tomorrow. Get you settled then I’ll head back home.”

Edward closed his eyes as exhaustion washed over him. He’d been walking around his room and the hallways since waking up that morning. Staying still and doing nothing had never been his style. If he wasn’t riding one of his horses in a class or training session, he was working with his students and clients on their rides. It was rare for him to sit until after the horses were bedded down for the night.

“Your people will be helping out while you’re healing, right?” Derek asked, and when Edward peered at him, he stared intensely.

“Of course they’ll help. Not only my stable people, but my clients and students will be taking care of things. Juan and Scout will take over working my other horses until I get cleared.”

Derek smiled. “I guess no one will complain about you not riding when they have two other riders almost as talented as you to work their horses.”

Edward shrugged. “I’m just lucky that Juan is only campaigning one horse this year or else he might not have been available to help me out. But it won’t be long until I’m back in the saddle. I’ve ridden with a broken arm before.”

“Which is completely idiotic,” Derek commented. “You could do serious harm to yourself if you fell off again.”

“I know that, Derek, but I’m not going to let this hold me back. Salt and I have a major show in Germany we have to ride in three months from now. I need to be ready and so does he. Unfortunately, no one else—aside from Les—can ride Salt the way he needs to be ridden.” Edward rubbed the back of his neck and pursed his lips when a thought hit him. “Do you think Les would work with Salt for me while I’m grounded? I could fly Salt out there.”

“Give him a call. I haven’t talked to either Les or Randy for a couple days, so I don’t know what kind of plans he has, though I’m pretty sure he won’t say no to you.”

I liked the way the author brought these two together. The attraction between them is apparent from the beginning and I liked that the author did not have them fall into bed the day they met; rathe...

Share what you thought about Fall into My Kiss and earn reward points.

Other books in the Merging Violently seriesView Series Page