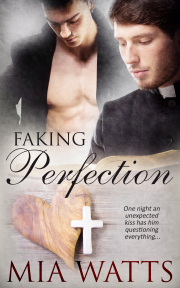 Garth has never regretted his path into ministry…until one night an unexpected kiss has him questioning everything.

Father Garth is a priest with a problem. For years, he’s had a fascination with a particular congregant. Though he’s never actually acknowledged his sexuality, Garth’s definitely more attracted to men than women. Fortunately, he hasn’t had to deal with making a moral decision...until the night he is caught in the dark and kissed senseless. Now, he fantasizes that the kiss was from the one man he can’t forget—Eli Jennings. For Garth, the man of his fantasies could be his, but how does he reconcile human desire with his vow to God?

“Father, you have to join the wedding party for the rehearsal dinner,” Susie enthused.

She walked quickly to him, her white sundress swishing with feminine allure around her knees and her chestnut curls bouncing against glowing skin. She hadn’t changed much in the twelve years since he had confirmed her. Terry, her fiancé, still watched her with adoring eyes, and her smile had stayed sunny and sweet.

She and her brother, Eli, had been Garth’s favorite students.

“You should have this night with your family and friends. It’s important to keep them close and appreciate the fact that they’ve all come together to see you marry your childhood sweetheart.”

“You are family. I’ve known you since forever. You have to be there.” Susie pouted prettily and blinked up at him with bright blue eyes.

Garth chuckled. “The last time that look worked on me, you convinced me to celebrate your college graduation six hours from here.”

“Tell me it will work again?” she pleaded. “If I only ask you to do me a favor every three years, is that too much to ask?”

“Terry has his hands full with you, doesn’t he?” Garth asked, already knowing he was going to give in.

She shrugged, but her mischievous grin told him she knew exactly how right he was.

Marrying her to her childhood sweetheart touched him with a strange sense of finality. He had come full circle with her. He’d do it. He’d go because she asked and because it might finally put to rest the dark fantasies of an unknown lover he’d encountered at her graduation. It closed a chapter that had opened three years ago.

Bookends to his fall from grace. He liked things tidy.

Father Garth Roderick looked as amazing as Eli Jennings remembered. Gray hair touched his temples prematurely, but it looked as thick and soft as Eli knew it to be. His fingers itched to bury themselves at the back of Father Garth’s head. He’d never have the nerve to do it in daylight, though. Looking into his clear green eyes put the fear of God in him—byproduct of sitting through confirmation studies and counseling sessions with the strict man of the cloth.

He’d always respected Father Garth, had wanted to please him. That had been important during the rough fitting-in period of youth. It was Father Garth who his mother went to when she couldn’t get Eli to obey. And he’d remembered the young priest who’d taken him through the confirmation vows with Eli’s riveted attention. Looking back on it, he realized it had been the early development of a young boy’s crush.

Having Father Garth’s influence again years later, when Eli had needed direction, had merely felt like an extension of a wiser role model walking him through adulthood. It hadn’t been until he’d been graduating high school for college that the strange emptiness of moving on had finally had an identity—he’d be leaving Father Garth behind. The loss had hit Eli greater than that of moving beyond the walls of his family home.

Father Garth had continued to spot Eli’s mind in the following years. Each time, Eli had become more of an equal and less the student. One-on-one games of basketball in the church parking lot, joining up to help fill shoeboxes for the military men overseas, the social time between Sunday classes and services—they’d all bred familiarity toward a deepened attraction for the man of God.

That attraction had become a consuming love. Seeing him at Susie’s graduation—alone though surrounded, and apart from the others though included in their joy—had burst the dam of emotion until Eli had acted.

He wanted Father Garth. He wanted to be let behind the sheer curtain of Father Garth’s friendship and look upon the man as a true equal—a lover. Risks like that had consequences, though. Unless Father Garth wanted the same thing, Eli would never ask him to sacrifice his calling to be with him.

5 Intense Stars! What a lovely way to spend an afternoon... From Page 1 you are pulled in to this intense story, and you won't turn away until the very last word. The heat was scorching between Garth...

The story itself is a smoothly written one. There is some angst and sweet moments and they are very well-balanced. Faking Perfection ...

Share what you thought about Faking Perfection and earn reward points.