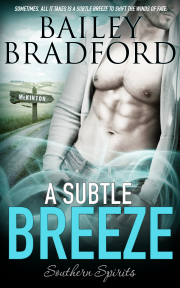 Book 1 in the Southern Spirits series

Ezekiel Matthers and Brendon Shanahan are about to find out that sometimes all it takes is a subtle breeze to shift the winds of fate.

Ezekiel Matthers is a reclusive man, forcing himself into the exile of his ranch after a violent assault left him wounded. While the scars on the outside have faded, the damage inside is much harder to conquer. Zeke resigns himself to a solitary existence, aside from his sister Enessa and, of course, his mama's occasional visits.

Brendon Shanahan has a very meddling cousin, Gloria, who is best buds with Enessa Matthers. When the two women convince Brendon that he should hook-up with the reclusive Zeke, a plan is hatched that sets a series of events into motion - with potentially deadly consequences.

Can Ezekiel conquer his fears and accept what Brendon is offering? Or will Brendon walk away, giving up on the love he has waited for? And will the visits from Zeke's mama - deceased for four years now - help the two men find their way to each other?

Only time will tell, and that may be the one thing the lovers don't have, because someone is out to destroy everything Zeke and Brendon hold dear - and this time, the bad guy just might succeed.

Ezekiel Matthers stood looking down at his mother’s grave. She’d been gone for almost four years now, and he still couldn’t get used to the fact that he wasn’t going to see her again, at least not in this lifetime. There were mornings when he stumbled into the kitchen bleary-eyed from sleep and swore he could smell her perfume, a soft, sweet scent he had never encountered on anyone else. It always left him with the feeling that he had just missed her, like she had slipped out the door to head to work right before he could hug her.

“Enough,” he muttered, kneeling down to place the bouquet of yellow roses he’d brought with him up against the tombstone. “I sure do miss you, Mama. I bet you’re having the best birthday yet, dancing with angels on those golden streets.” Zeke closed his eyes as a soft breeze caressed his skin, bringing with it a faint fragrance that somehow soothed his soul. The loneliness that was his ever-present companion still gnawed at him, but he pushed it down, as always.

Zeke had all but given up on finding someone to share his life with. When his mama was still alive, he hadn’t wanted to risk bringing trouble down on them, on his mother and sisters, by having a relationship out in the open. There had already been too much such trouble once people found out he was gay, and his mama and sisters had been confronted in town on more than one occasion. Ezekiel had, too, but it had never concerned him like it did when it happened to any of his loved ones. On top of that, somewhere in the darkest corner of his heart, Zeke had held out hope that his oldest sister, Eva, would eventually ‘come around’, as Mama had said she would. That hadn’t happened, and when Mama died, the chasm between him and Eva had grown into what he feared was an unbridgeable size. Zeke didn’t know if he even had the strength, much less the desire any more, to bother with trying to fix that sad relationship.

That gentle breeze seemed to nudge him, almost chastising him for his melancholy and defeatist thoughts. Zeke shook his head at his fanciful musing, saying a silent prayer for his mama before opening his eyes and standing. He grunted a bit when his right knee popped, something that gave him problems courtesy of a fight—an assault really, though calling it a fight made it somehow seem less personal, less planned. The damage to his knee, caused by a pipe and a few homophobes, was not extensive but it did act up on occasion. All things considered, he figured he was lucky that was the severest injury he had sustained from the encounter. If Elizabeth and Enessa hadn’t overheard the men plotting minutes before and rushed to follow them… Well, he had no illusions. Those men had intended to get him out of McKinton, one way or another.

Giving one last glance to his mama’s grave, Ezekiel turned and headed for his truck, noting another vehicle pulling in to the cemetery. He squinted, recognising Enessa’s little hybrid—that looked way too tiny for the number of people in it. Deciding he didn’t feel up to making conversation with whomever she had with her, Zeke waved in her direction and picked up his pace so he could leave before she even stopped her car. He groaned when he realised he wasn’t going to make it. Enessa parked and jumped out of her car, running straight for him.

“Zeke! Wait!” Enessa ran full tilt, almost careening into Ezekiel before stopping. He couldn’t quite hold back a grin. Nessa was just too sweet to stay irritated with for more than a few seconds. He caught her forearms, preventing her from teetering over courtesy of her sudden stop.

“Thanks, Zeke!” Enessa smiled up at him, eyes lit up like the Fourth of July. “Why were you trying to run off?”

He sighed, wanting only to get back to the ranch where he could keep himself busy with work. “Nessa, I’m really not up to having to play nice with your friends right now, and I have a lot of work waiting for me at the ranch.” Zeke tried to ignore the look she gave him, refusing to be guilted into hanging around.

“But, Zeke…I just wanted to visit Mama and my friends were here, and you know Gloria. The other…” Enessa trailed off.

Ezekiel put his arm around her shoulder, using it to steer her in the direction of her car, not paying any particular notice to the two people lingering by the hybrid.

“Nessa, go visit Mama. Take your friends with you, do what you have to, honey, but I am just plain not in any mood to be chatty with your buddies, okay? Not right now.” He watched her digest what he said, saw she wasn’t going to be hurt by it. “Go on, now. Your friends are waiting for ya.” Zeke tipped his head in their general direction, assuming that’s what they were doing.

Enessa surprised him with a big hug before she stood on her tiptoes and planted a smacking kiss on his cheek.

“I’m not sure they’re waiting on me, but okay. Since you aren’t feeling very friendly right now and have so much work to get back to, would it be okay if I invite my friends over for supper? I’m making fried chicken and mashed potatoes, gravy and biscuits and—”

Zeke laughed, shaking his head. One way or another, Nessa was going to make him meet her friends, and there was no reason he could think of not to do so this evening. Not without hurting her feelings, anyway.

“Nessa, if you’re going to fix one of your homemade meals for supper, you can bring over the entire college campus for all I care.” He hugged his little sister, maybe not so little now at twenty three, but she’d always be little to him, especially as she was a good eight inches shorter than his own six-foot, three-inches.

“I’ll see you—and your buddies—at the supper table, okay?” Zeke let her go and headed back over to his truck, pushing aside thoughts of supper and company, already focusing on the tasks waiting for him when he got home. Soon his mind was making lists and shifting around priorities, leaving no room for him to dwell on things like his mama’s death or how lonely he was.

I was completely spellbound by Zeke and Brendon's story and completely outraged on their behalf…talk about evil, someone should take his enemies and ties them up in an anthill…for eternity. I can...

Well written and intriguing this amazing story draws you into the lives of two men who despite the odds fight to be together. It was emotional at times and mysterious at others. Read more reviews

Share what you thought about A Subtle Breeze and earn reward points.