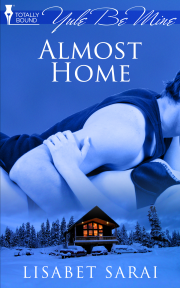 Yule Be Mine collection (Book #2)

Home is a state of heart.

Suzanne and Gino have history going back to high school, but for years Suzanne has been three thousand miles away, preoccupied with her challenging career.

A mistletoe kiss at a holiday party reminds her of their old bond and proves that some things get better with age. When Gino rescues her from a New England blizzard, though, she discovers that she's not the only love in his life. Gino shares his bed and his colonial-era farm house with taciturn painter Harris Steele.

Snowed in, without electricity or running water, the three explore the many shapes a triangle can assume. Although she's far away from her everyday existence, Suzanne realizes that she's almost home.

For a short story, I was surprised at how well the story flowed with each change in events...I am not always a big fan of short stories but I found that this one was a great seasonal story.

Share what you thought about Almost Home and earn reward points.

Charles Dickens’ A Christmas Carol was part of my family’sholiday tradition for as far back as I could remember. Ananimated television special shown every year (with squinty eyed character Mr. Magoo playing the role of the miser Scrooge) firstintroduced me to the story. I was probably ten or eleven when Iread the original. Even at that age, I could appreciate themessages embedded in the tale: love is much more&a