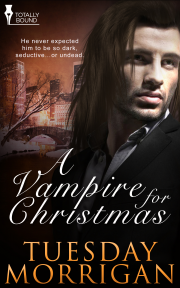 A Vampire For Christmas

Kyle Lepiz knows his neighbour isn't quite human and he's right. He just never expected him to be so dark, seductive…or undead.

Kyle is a hacker determined to prove the government is experimenting on soldiers. Lucky for him, the proof is living right next door. Dieter has to be a government created superhuman—no mere mortal could be that good-looking. Surely there has to be government experimentation at work there. With the evidence conveniently living just a stone's throw away, all Kyle has to do is rein in his libido long enough to convince Dieter to spill his secrets.

Dieter is a vampire on the run from an old-fashioned and overbearing family. His mother wants grandchildren, his grandfather wants power and both of them are convinced Dieter's marriage to a rich heiress is the solution. The last thing the harried vampire needs is a crazy ass neighbor stalking him through the streets of the city, weirding out any man Dieter tries to date and severely impeding the vampire's mission to find his True Mate—the one person good enough to put an end to his family's plans for an arranged marriage. If only there were some way to get the handsome lunatic off Dieter's back.

Kyle’s neighbor was so smoking hot he’d set off the smoke detector. Literally.

Okay, so maybe he was so good-looking Kyle’d forgotten he was cooking the first time he’d spotted him and ended up burning the plantains.

It hadn’t helped that the guy had been naked and the only thing hiding his modesty had been a strategically placed blue vase. Stupid glass! It had kept Kyle from finding out if the man was just as well-built…everywhere.

That day six weeks ago had begun Kyle Lepiz’s fascination with his neighbor, though it wasn’t right to call the tall, dark and often naked guy his neighbor since he lived in the building next to his rather than down the hall.

The guy was perfect. Unnaturally so.

Kyle had just known there was something otherworldly about him the first time he’d spotted him and his investigations had proved it.

Initially, Kyle hadn’t been sure he had the right guy. Kyle had followed D Mossel—at least that was the name on his mailbox at his apartment—for six painfully boring nights before Mr Perfect did something…well…unnatural.

The night had started out like any other. Keeping at least a half a block between them, Kyle had followed the man through Manhattan. About an hour later, tall, dark and gorgeous had ducked into an alley.

That had been different. It should have clued Kyle in that the night wasn’t going to be like the others.

For a moment, Kyle had been unsure of what to do. D Mossel was in the alley and he might be doing something perfectly unnatural—like smoking a cigarette—but to find out, Kyle would have to move closer to him, and maybe even walk into the alley. After about three minutes of indecision, Kyle had ventured toward the small street.

Mossel was just zipping up his slacks when Kyle ducked into the lane. Flustered, Kyle damn near tripped over some trash in the mouth of the alley.

After buttoning up his coat, Mossel didn’t head toward the mouth of the alley like Kyle had expected. Instead the man walked to the farthest wall. He stood there for a moment and then ran at the opposite wall. Frightened, Kyle watched, worried about him smacking into the building, because Mossel wasn’t slowing down. In fact, he seemed to be moving faster with each step. However, Mossel never collided with the wall. Just before he reached the bricks, he leaped and landed on top of the building.

The roof he’d jumped onto was only two stories tall, but…it was two freaking stories tall.

Kyle had followed Mossel every night, since that evening six weeks ago, but the man hadn’t done anything special since then. Still, Kyle knew the guy wasn’t human, not entirely. Kyle just needed to figure out what he was.

Kyle rushed off the subway and doubled up the concrete steps at his stop, dodging bodies and sliding through the after-work crowd. He just barely stopped himself from jogging the four blocks to his apartment to get home as quickly as possible.

It was the first week in December and the city was overrun with materialistic Christmas cheer. There was a tastefully done bright white holiday display in the front window of the ground-floor drugstore just to the right of the train station. Arms laden down with two paper bags, one woman stepped out of the store. A cheerful Christmas song sung by this year’s latest boy band floated over to him.

Humming the redone classic, Kyle doubled his pace until he spotted his apartment building. He unzipped his leather jacket before pulling open the door to his building. He  jogged the few feet to the elevator. A few minutes later he was in front of his apartment.

A smile curved his mouth when his eyes landed on the hand-woven Christmas wreath on his door. His abuela, grandmother, had made it for him when he’d first moved into his apartment.

The ornament was more than a little unconventional, crafted from plants and flowers from his native Puerto Rico rather than the traditional evergreen, but he loved it anyway.

His hands shook with nerves as he jammed the key into the lock and opened the door. He dropped his bag a few inches away from the entrance, slammed the fireproof door behind him and ran up to the window in his kitchen.

Right across from his itty-bitty window were three floor-to-ceiling panes of spotless glass. The windowpanes were dark. Blackout curtains hid the apartment from view.

Kyle knew from experience that the lights were off in the apartment. The occupant was still asleep. He glanced at his watch. It was a little after six in the evening. He still had some time.

He darted around his place. It was a tiny one-bedroom apartment that personified living space in New York City. His bedroom fit his full-sized bed and two small dressers, placed side by side across from the bed, and nothing more.

The single bedroom, living room and kitchen were clean. He owned little to dirty the place up. His study area was a sharp departure from the rest of his minimalist apartment.

Most of the money spent on his place was in that small corner. His desk was heavy and wood. Hand-carved, it had cabinets, slots and nooks for everything. The desk was long and wide, large enough to fit a pretty impressive flat-screen desktop computer and a laptop.

Neither computer could be found in a store. They were the products of long hours, blood, sweat and a whole lot of tears. The computers were his babies, family he’d built piece by piece.

Tuesday Morrigan began her love affair with romance at an early age. As a child she was always infatuated with the novels she snuck from her mother. Later, in high school, the public library became her sanctuary with an endless array of romance novels. Tuesday is still an avid reader of books. Thanks to shows like Buffy, Angel, and her latest infatuation, Supernatural, Tuesday prefers her stories to have a little more grit. Her favourite genres have always been fantasy, mystery, romance and erotica, so as a writer, she tries to blend the genres to create her own personal niche.

Share what you thought about A Vampire For Christmas and earn reward points.

Tuesday Morrigan - Interview for A Vampire for Christmas

Why do you like your stories to have a bit more grit?

Life is gritty. It's hard, it's dark, but I'm a generally very positive person so as many issues as I give my characters, I love to have them overcome those obstacles. Hardship builds character and strength and I love finding out the depths of my characters. I bounce in my seat writing those scenes.