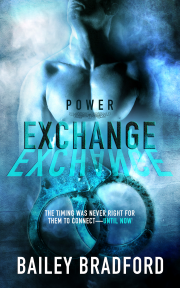 Book 1 in the Power series

What’s a sub to do when the Dom he wants looks dejected? Hank’s about to find out as soon as he works up the nerve to approach Master Thomas.

Hank has watched and wanted Master Thomas for a long time. When Master Thomas’ sub leaves him looking dejected, Hank wants to take a chance. Fear holds him back until his friend prompts him to take action and be more forward than he’s ever been before.

Thomas isn’t broken-hearted, but his pride sure took a hit. He’s sitting in the club, doubting himself, as his ex-sub is acting more like a Dom than not.

Then a sub wearing white leather approaches Thomas with some goading from a friend. Thomas has noticed Hank before, but the timing was never right for them to connect—until now.

With one daring move by a sub who knows Doms are only human, the future suddenly looks brighter than Thomas had hoped it could be.

Publisher's Note: This book was previously released elsewhere. It has been revised and reedited for release with Pride Publishing.

Why is it that people think Doms don’t have feelings? Not for the first time, Hank wondered that as he unobtrusively watched the dark-haired man slumped on the barstool a dozen feet away.

Despite the dejected look to those rounded shoulders, Hank had to fight not to drool. Those were broad shoulders, Dom shoulders, meant to be held back with pride and confidence.

Yet somehow, somewhere, someone had stripped that confidence and pride away from Master Thomas.

While Hank didn’t know Master Thomas, he knew of him, though he doubted the same could be said in reverse. There was no reason at all for Master Thomas to notice him, since Master Thomas had—as far as Hank knew—been involved with someone else.

That might not be the case anymore. A happy Dom wouldn’t look so dejected.

Hank fiddled with the flimsy straw in his water glass as he considered the situation. What he didn’t know was what had happened between Master Thomas and the pretty little sub he’d been with every time Hank had seen him—well, them—in the past six months. He could imagine many scenarios, but none in which anyone in their right mind would leave a man as sexy as Master Thomas.

Hank glanced around the room of the club and choked on his own spit when he spied what—who—was the cause of Master Thomas’ unhappiness.

That pretty little sub, Kelly, who’d been with Master Thomas for months, was laughing and flirting—no, he was all but fucking some young wannabe Dom over in the corner.

And that was just it. Kelly wasn’t acting very subby, and the wannabe Dom was looking more like a switch. For that matter, so was Kelly, who’d proclaimed himself a sub. Or former sub. Hank was fine with people discovering more about their sexuality, learning about themselves. But he hated to see people hurt, too.

Well, whatever Kelly is, he isn’t what Master Thomas needed. Master Thomas is all Dom. Dejected Dom. Crap. It hurts my heart just to look at him. And no one else seemed to be paying any attention to Master Thomas, not even the bartender, Earl, who chatted up everyone. Earl was busy trying to take drink orders while wearing a ball gag and a horsetail butt plug. He’d either pissed off his Dom or made him very happy. Hank didn’t know which. He had nothing at all against pony or pup play, but he just didn’t get it. He preferred more vanilla BDSM, as he thought of it. To each his own. Hank didn’t judge.

Although, he was inexplicably irked with Kelly. What is that man’s game? Is he trying to be a jerk and hurt Master Thomas? Or is he just—what does it matter? He looks happy.

Hank returned his attention to the dejected Dom. If he were honest with himself, he’d kind of had a thing for Master Thomas for a while now.

Longer than a month or two. Or three. Or four. Hank sighed.

He’d been crushing on Master Thomas for almost a year, in fact—from the moment Hank had first seen the then-new Dom.

Hank was embarrassed when he thought about how much time he’d wasted lusting after a man he was too intimidated to approach. Of course there’d been more to it than that. He’d had no reason to introduce himself to Master Thomas or hope to catch his attention.

Hank had been with Master Gregg for one hellacious month, and then there’d been Master Elmo—who, despite the name, wasn’t warm and fuzzy at all. In fact, he, like Master Gregg, had been too distant for Hank’s liking. He loved to submit, needed to submit, but he wanted to be appreciated for it, not humiliated.

That was how he’d felt with most of his previous Doms, which must have said something about him. He kept choosing the wrong man. Hank didn’t want to self-analyze right then. It would depress the heck out of him.

Hank snorted and took a sip of his tepid water. At least he could admit that he chose the wrong man pretty much all the time. Wrong Dom, wrong everything, and he knew it—he just didn’t understand why.

Hank squeaked and jolted, smacking his glass and sending it toppling off the table. At the same time, he slapped a hand to his chest—because his damn heart was close to breaking out of it—and glared up at Larry.

Larry, all blond hair and big eyes, smiled as he held the glass in one hand. “Good thing I have amazing reflexes, huh?” He set the glass back on the table. It was almost empty since the water in it had sloshed on the table and floor. “Did I scare you?” Rather than waiting for an answer, Larry stuck his fingers in his mouth and whistled in that ear-bleedingly loud way that Hank had always envied. “Hey, pony-boy, spill on aisle pathetic here!”

“Larry! You jerk! I’m not pathetic, and you know you scared me.” But Hank couldn’t be mad at Larry, even though he knew that big-eyed innocent act was just that, an act. Larry was a total slut and prankster. Hank envied him both abilities. “Why are you here with me instead of getting whipped or fucked?”

“Hey, who says you’re the pathetic one? As you mentioned, I’m not out there getting whipped or fucked. But yeah, okay, you’re kinda pathetic too.” Larry sat down and nodded toward Master Thomas while reaching for the napkin dispenser. “Why don’t you go over and talk to him? You’ve been hot for Thomas since you first saw him eons ago.” He began cleaning up the mess Hank had made.

“It wasn’t eons, you drama mama! He’s only been in the lifestyle for a little over a year, according to what I’ve heard. I mean, as far as I know, he hasn’t been involved elsewhere, though I don’t know him so…” Man, I need to shut up! Hank sat up straight and stuck his nose in the air but his mouth kept flapping. “And, just for your information, I have not been lusting after him or anyone—”

“Liar, liar, leather chaps on fire,” Larry sang. “Shut up already, you pretty little vestal virgin. Go get fucked and whipped. At least one of us should be having fun tonight. Since I can’t find anyone who wants to do only one of those things with me, I’m giving up. Plus, Thomas’ ex is busy trying to fuck everything that crosses his path. I’m guessing he thinks he has something to prove.”

“I’m not a virgin, vestal, pretty, little or otherwise,” Hank grumbled, not really bothered by Larry’s teasing but knowing Larry would get a kick out of thinking he was. Hank had bristled a little when Larry had called Master Thomas by his given name instead of using the honorific, but he got it. Master Thomas wasn’t Larry’s master, nor was he Hank’s. However, Hank always thought of him as Master Thomas, perhaps because he did harbor a secret desire to serve him. Although, maybe it wasn’t such a secret since Larry had picked up on it. Kelly walked right behind Master Thomas and sneered as he passed by.

“I guess he does have something to prove,” Hank managed to say as anger prickled his nerves, making him feel a level of aggression he rarely experienced. He wanted to punch Kelly, and that wasn’t like him at all. “And he’s being a jerk about it.”

“But is he trying to prove something to himself, or to Thomas, hm? Kelly’s always been a jerk, Hank. He’s a totally snotty brat.” Larry scoffed. “You gotta wonder what went down between those two, though… I heard stuff about Kelly. Like I said, the guy’s an asshole and a half.”

Hank arched an eyebrow at Larry. “And what, exactly, is a half an asshole?”

“A fuckin’ mess who likes to screw with people’s heads, that’s what,” Larry drawled. “Now grow a pair and go make that Dom feel better. You can pucker those pretty lips or, you know, whatever part you want to pucker, and shake it for Thomas.”

“Oh God.” Hank groaned and wanted to smack Larry, but the smartass would just enjoy it if he did. “Please stop talking.”

Larry narrowed his eyes at Hank. “Or, you know, I suppose I could go see if he wants to do a scene together. Looks like he might be in the mood to wallop me. Not sure if he’s up to fucking.”

“Larry, cut it out. I know what you’re trying to do.” Hank was irritated despite his desire to remain unaffected by Larry’s attempt—damn it, a successful one!—to goad him into action.

Because Hank’s body was determined to circumvent any argument his brain might have made, he was standing up and flipping Larry off before Larry could do more than cackle.

“You’re a turd,” Hank muttered, heart pounding as a mix of fear and need raced through him.

Larry gave him two thumbs up. “You love me, and you’ll love me more once you get to hook up with your crush.”

Hank didn’t dignify that statement with a response. Besides, Larry was right and he knew it.

“Go get ’em, stud,” Larry urged. “Grab your fantasy Dom by the balls. Or, you know, the other way around. Let Thomas grab you by yours!” He wasn’t as quiet as Hank wished he’d been, which meant of course Larry was loud enough to be heard by Master Thomas, who glanced their way.

For a short, Bailey Bradford’s 'Exchange' is a captivating read that left me wanting more! More of this charming partnership and more of Bailey’s enticing writing.

Share what you thought about Exchange and earn reward points.