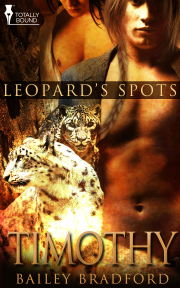 Book 3 in the Leopard's Spots series

Tim Trujillo is about to learn a whole lot more than a few facts about his heritage as a snow leopard shifter.

All Dr Tim Trujillo had in mind when he took the position with the Snow Leopard Conservation Programme in Mongolia was to see if he could learn anything about his heritage. Snow leopard shifters sure weren't native to Colorado, his home state, and though his family was learning more about shifters in general as various cousins found their mates, Tim wanted to know more about where his kind came from, and what made them the way they were.

He hadn't counted on destiny intervening in the form of one very fine snow leopard shifter. Otto Marquat is a native to the Land of the Blue Sky, as Mongolia was sometimes called. But there in a country so far from his own, Tim finds more than his heritage. He finds adventure, cruelty, friendship, pain—and love so strong and unbreakable it will turn his world inside out.

Some people were vivacious, full of energy and fairly bouncing with it. They had an inner glow, the kind you could see in their eyes, in the mischievous curve of their smile. You just knew they’d be a lot of fun to hang out with, and usually, they were-but they could also get on your very last nerve and make you want to throttle them.

Tim Trujillo was experiencing just such an urge towards his best friend Dane Calderon-Dr Dane Calderon, not that anyone would guess the man held a PhD in Zoology. In fact, with his short stature and youthful features, no one would think Dane had graduated from high school yet. He sure didn’t act like it.

"...I still can’t believe we’re really here!" Dane rose up onto his toes and put a hand to his forehead, shading his eyes as he looked around. "I have to say, I thought Mongolia was all, I dunno, like it was in Mulan." Dane stopped and frowned at Tim. "Wait. Was the movie set in Mongolia, or were the invaders Mongolian?"

Tim was not one of those effervescent people on the best of days. Added to that, he was utterly exhausted from flying halfway around the world then riding in the shittiest vehicle ever—although it was much better than walking or riding a horse, thank you very much-he was definitely not a chatty man.

What he was, was a mix of man and feline, a snow leopard shifter who had to keep his dual nature hidden from most people. He apparently hadn’t got the playful kitty gene some of his shifter relatives had, either. Bubbly wasn’t a word that would ever be used to describe Tim Trujillo.

Or perky, or particularly mild-mannered. If it’d been anyone besides Dane blathering on about a cartoon, Tim probably would have told them to get their head out of their ass and get a life.

But it was Dane, and Tim never could stand to see the guy unhappy. Dane had perfected the hurt puppy look and even Tim, grumpy as he could be, wasn’t immune to it. He didn’t like it knowing he was so easily manipulated though, so Tim just grunted and shrugged.

Dane huffed and smacked his arm. "Right, I should have known. You probably never even saw the movie, did you?"

Tim racked his brain until he found a tendril of memory, a hint of the movie plot he’d seen or heard about somewhere or another. Probably he’d overheard parts of the movie when one of his siblings watched it because Tim just wasn’t into stuff like that. "Why would I? It was a cartoon."

Dane scrunched his features into a horrified expression and clucked his tongue. "Oh, Tim, what a sad, sad childhood you must have had. I can just see you now, holed up in your bedroom, posters of Einstein and Jack Hanna all over the walls, hunched over at your desk with your nose in some thousand-page text book. Poor kid."

It irked him because Dane wasn’t too far off base. Tim glared at his friend, who remained unfazed about pissing Tim off. "No Einstein, he was creepy looking. Jack Hanna was kind of hot, though."

Honestly, Tim still thought the man was cuddly-cute. Not that he’d admit so even if his life depended on it.

"And I liked it in my room. It was the only place I could escape my brother and sisters." As the oldest of four kids, it’d seemed to Tim there was always a sibling wanting to follow him around.

Usually he hadn’t minded, but it’d sucked when he had wanted to read or have any kind of alone-time.

Dane sighed wistfully and resumed looking around. "I wish I’d had a brother or a sister."

"I can lend you Isaiah or Renna or Stephanie any time you want to borrow them—when we’re back in the US," Tim tacked on. No way would he want to hear his sibs whining about being in the middle of bumfuck nowhere for weeks.

"Right. I might take you up on the sibling borrowing sometime." Dane stretched up onto his tip toes again and gave a low whistle. "Mmm-mm, sex on a stick at three o’clock. Damn!"

Despite his snarky mood, Tim wasn’t going to miss the opportunity for eye candy if he could help it. He seriously doubted he’d be getting any action in Mongolia, as there were no gay nightclubs, no cruising, no anything in the way of finding a potential hook up in the town they were in. Or anywhere he knew of, from what he’d read online. Mongolia was not a hotbed of sexual delights for anyone as far as he could tell.

Bailey Bradford creates a superb blend of action, suspense and romance in this especially enjoyable installment to the Leopard's Spots series.

Bailey Bradford creates a superb blend of action, suspense and romance in this especially enjoyable installment to the Leopard's Spots series.

Share what you thought about Timothy PRINT and earn reward points.