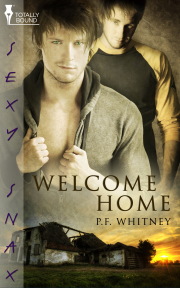 Devry and Holden have been in a relationship for two years, but Devry has never been given the opportunity to meet his love's family until he finds an invitation to Holden's family reunion. After a lot of convincing, Holden decides it's time to take him to the small town where he grew up.

Though nervous, Devry finds Holden's mother and father more than welcoming, but Holden's grandfather is less than hospitable, unaware that Devry is his grandson's lover. Overnight he has become a secret…something he never wanted to be.

As the day of the family reunion approaches, Devry finds that he doesn't know Holden as well as he thought he did. Holden has kept secrets from him that could very well tear them apart. After Devry creates a secret himself, he must decide if it's one that he should keep or reveal to Holden in order to save their relationship.

Share what you thought about Welcome Home and earn reward points.