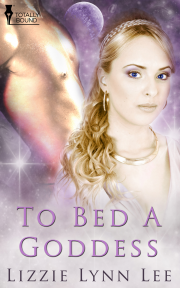 To Bed A Goddess

Sometimes, a Goddess is more human than a human is…

Chosen by Gods and cursed by fate, Amaranth, the sacred virgin of the Sun Temple, is destined to consort the ruthless warlord Shanrakhan, as his war prize. But before Shanrakhan could take her virginity, his enemies kidnap Amaranth and pierce her heart with the Star of Hecave, an ancient amulet that freezes her in a dreamless slumber for thousands of years…

Graeme Darin, an ex-admiral of Imperial Arcova Fleet is on the run when he realises the ship he and his crew stole carries a secret archaeological relic—a tomb of a fabled goddess. Out of curiosity, Graeme removes the amulet. To his surprise, the cold body of the goddess springs back to life.

With the Imperial Armada on their tail, Graeme faces problematic dilemmas between keeping his crew safe and his growing attraction to Amaranth. But can a mortal man resist a Goddess' seduction?

Graeme Darin caught himself from correcting his former aide. There was no reason for Keiran to keep addressing him as sir. After all, he’d been stripped from his ranks and his honour. Up to seventy hours ago, he was a Rear Admiral in the Arcova Imperial Fleet with a bright future ahead of him. Now, he was a fugitive, running from the wrath of Queen Breanna. Perhaps old habits were hard to break, and Keiran Mohr was one of those people with a deep loyalty streak. “What kind of problem?” Graeme asked.

“The cargo, sir. It has the Imperial’s seals.”

“What cargo?” Nate, Graeme’s brother, interjected from the captain’s chair. He was piloting their stolen ship and had been setting their course to Sierra-Allyx when Keiran came into the bridge, reporting his findings. Nate looked perturbed. “This ship is scheduled to be decommissioned next month. We aren’t supposed to be carrying any cargo.”

“Well, we are.” Keiran turned to Graeme. “The container is almost big enough to fill the whole dock. What are we going to do about it, sir?”

“I’m most certainly not,” Keiran bit back. “Do I look like I’m shitting you?” Irritation painted his face.

Graeme didn’t know how the two could conspire together. He hadn’t seen Nate in years. His brother had been practically a kid when Graeme left their homeland and joined the Imperial Fleet as a freshly minted lieutenant from the academy.

“Nate is all right,” his mother had said to him once. “He takes after your father’s good looks, and he adores you.”

About three hours ago, Graeme had been surprised when a young Imperial Officer who visited his cell turned out to be Nate. His mother was right. Nate has become the spitting image of their late father when he was young. He had grown into a slender, comely, sophisticated young man whose elegant demeanour could only come from years of refinement in the Royal Academy. But it all was a con. His mother had told him Nate was a rebellious youth. When his brother turned nineteen, Graeme heard that Nate had joined an ill-reputed trader and become a smuggler. Graeme didn’t expect the news of his imprisonment to reach Nate, but it had. And it compelled Nate to impersonate an Imperial Officer in order to bust him out of prison.

If Graeme was given a choice, he would have preferred to stay in his cell and face his trial like an honourable admiral of the Fleet should do. After all, he was innocent. The malicious persecution against him was nothing but the Second Queen Breanna’s tactic to bring him off to his heels. That wretched bitch had lusted over him from the moment Graeme was sworn in as the youngest admiral of the Fleet. When Graeme didn’t return her seductions, Queen Breanna threw him in jail for contempt. Graeme was sure the judge would clear his name. The evidence of contempt was laughably weak. When Graeme tried to convince Nate to leave, a prison guard spotted his brother’s fake credentials. Nate clonked the guard unconscious and everything went downhill from there. Graeme had no choice but to bust out of the prison with Nate.

After they made their escape, Nate rushed him to the Fleet stockyard. Graeme thought besides turning into a nutjob, Nate was also suicidal. No escapee in their right mind would make a daring escape then run straight to the lion’s mouth. But later on, Graeme had to admit Nate’s escape plan was a brilliant one. While the authority was busy turning the capital inside out looking for them, they were safely hiding in their own enemy’s turf. His brother had planned to steal one of the Imperial’s ships as a gateway vehicle to get out of the territory. Since every commercial and private ship in and out of the planet was closely monitored by the stationmaster, Nate thought it would be much safer if they stole an Imperial ship. The stationmaster didn’t regulate the Imperial Armada.

In the stockyard, Graeme was surprised to see Keiran Mohr and Brannan Shih waiting for them. They were his two aides from the Fleet. While Graeme was incarcerated, Queen Breanna did a housecleaning, firing those who stayed loyal to Graeme. He didn’t know exactly how Nate ended up recruiting Keiran and Brannan, but the three had hatched a daring escape plan that was so insane, it had to work.

Share what you thought about To Bed A Goddess and earn reward points.