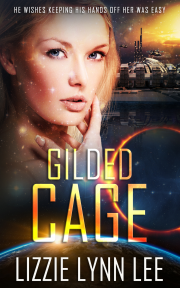 He wishes keeping his hands off her was as easy as keeping her safe, but she's one delicious temptation no mortal man can resist…

As the sole heir of the richest man in the world, Lillian Blackwell lives her life as nothing but a pawn in a golden cage. Lonely in her tall tower, she yearns for that someday when her knight in shining armour will come and rescue her and set her free.

Battle-worn veteran, Brandon Shea lost everything after he came back from the war. He's just starting over when he gets a job as Lillian's bodyguard. He certainly doesn't expect Lillian to beg him to free her when she's forced to marry her father's colleague, Maxwell Stanford, a cunning billionaire who has a terrible temper and is also twice her age. Brandon swore he'd had enough of playing hero, but when he realises Lillian is just as lonely as he is, he can't refuse her request.

Hiding Lillian from Stanford's men is an easy job, but things get out of hand when she wants Brandon for more than just her bodyguard. Suddenly, playing the knight for his modern-day Rapunzel becomes much more physical than he'd planned.

Sleep hadn’t been easy for Brandon Shea ever since he went to war. And it hadn’t been easy, either, after he’d returned from the hellhole thirteen months ago. The slightest sound, like a footstep or a sigh of breath, would send him jumping awake. Each time he was interrupted from his sleep, his next habit was to grab his Glock from under his pillow and aim it at the intruder. In Afghanistan, he squeezed the trigger and shot the fools before he even opened his eyes. He was a black ops soldier who had often been deployed solo behind enemy lines. Anybody stupid enough to sneak up on him would be automatically considered his enemy. His rules of engagement didn’t include taking prisoners of war. His job was to scout and kill—heavy on the killing part.

A train of thought flared across his mind, blaring an alarm that he wasn’t in the war zone before he was compelled to pull the trigger. He opened up his eyes and relaxed his stance. That’s right, I’m not in Kandahar anymore. I’m in Tokyo, the whore of civilisation. He blinked and focused his vision on his intruder. Ghosts from his past flashed before his eyes before he could shake them off. Faces of the enemy combatants he’d killed. Brandon blinked again. The ghosts scattered, replaced by the face of a young woman who stood frozen like a deer caught in headlights.

The realisation made his heart stop beating for a second. For the love of God, I almost killed you, kid.

Brandon gulped a lungful of air, and placed his Glock in his lap. “Miss Blackwell. Nan desu ka?”

She drew a relieved breath when the barrel of the gun was no longer staring at her. “I speak English, Mr. Shea. Very well.”

“What is it? What are you doing here?” Brandon repeated his question. His eyes skittered towards the door. The bolt was still locked from the inside. No one could get in unless that person was a ghost. “How did you get in here?”

Lillian shyly pointed to one side of the wall across from his bed. It had a small rectangle opening he hadn’t noticed before. “That used to be a tokonoma.”

“It was connected to my bedroom. I came here often. To hide.”

“I didn’t know this was one of your rooms. I’m new and Mrs. Mitsusaki gave me this as my bedroom.”

“Then why are you here?” Brandon felt irritated. He didn’t like being wakened from sleep. Not when he’d almost blown her pretty head off.

Lillian pursed her lips and sat at the edge of his bed, her hands folded in her lap. She studied his gun before staring at him with defiance in her eyes. “I have a proposition for you, Mr. Shea.”

Brandon ran his hand through his hair. “What kind of proposition?”

She leaned closer. Her icy-blue eyes blazed. “Take me away from this place. Anywhere. I don’t really care.”

“I’ll compensate you, of course. I have an account that no one knows about. Not even my father. Take me away from this place and that money is all yours.”

“Take you away?” Brandon frowned. “Are you nuts?”

“You didn’t ask how much money I’m prepared to give you.”

“Mr. Shea,” she whispered urgently. “I don’t want to marry that man.”

Seconds later, it dawned on him. Lillian Jasmine Blackwell, his new charge, was recently engaged to a billionaire named Maxwell Stanford. The news about their engagement had been plastered all over the tabloids, newspapers and the TV. He hadn’t paid much attention to it since he hadn’t been working with the Blackwell family at that time. Today was supposed to be his second day in the job as Lillian’s bodyguard. Actually, his shift wouldn’t begin until ten.

“I just found out my father has set a wedding date. It’s one week from now.” Lillian shuddered. “I hate Maxwell. I’d rather slit my throat than marry him.”

...jam packed with adventure and some of the steamiest sex scenes I have ever read...From beginning to end each word was worth reading...a modern day Rapunzel.

4.5 out of 5!...a moving love story...The sex is hot and spicy...I really enjoyed the non-stop action and adventure of Gilded Cage and can't wait to read more from Ms. Lee.

Share what you thought about Gilded Cage and earn reward points.