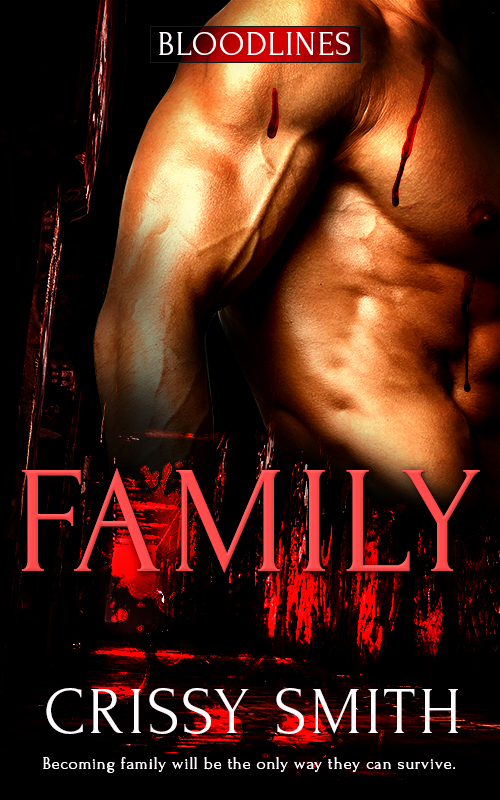 Book 4 in the Bloodlines series

Becoming family is the only way they can survive.

Dakota doesn’t know what it is to feel the love and acceptance of a family. She was raised with only one purpose—to become an agent in the Organization that works in the shadows to keep innocent and unaware humans from discovering the paranormal world.

That all changed when she met Kieran Smith, who’s quickly becoming the most important person in her life—more important than the job she didn’t want in the first place.

Kieran isn’t like other people. A loner, even his own kind shun him. He’s learned long ago not to depend on anyone else—until he met Dakota. Dakota is slowly proving that not only can she be trusted, but she truly loves him, faults and all.

With their small but loyal group of friends by their side, Dakota and Kieran must face their demons and their pasts. Family has only meant pain before, but now their chosen family will be what they need to survive…and finally get their happily ever after.

Reader Advisory: This book is best read in sequence as part of a series. It contains scenes of violence, references to murder, satanic rituals, drug taking, parental neglect, capture, incarceration and a brief glimpse of m/m sex.

“I need to speak with the Elder Argent. This is Agent Smith from the Organization,” he said calmly. He wondered if it was the same housekeeper from his childhood. Veronica had always been kind to him, but Kieran didn’t recognize the voice on the other end of the phone line, so he didn’t say anything else to her. Using his new name was a ploy to test how much his father knew about his new life.

“Please hold.” He didn’t know why he expected music. Instead Kieran just heard silence. Long minutes went by before he heard a familiar voice.

“This is Elder Argent.”

Kieran had to close his eyes. His father’s voice. He never thought he’d hear that sound again.

There was a moment of pause. “Son?”

“Yes.” Kieran swallowed. “I’m calling you with some news.”

There were no questions about how he’d been. His dad probably didn’t care.

“Marcel and Elijah have been arrested and are in the custody of the Organization. They’ll be processed in the morning, so you should expect a phone call.”

“I take it they’re in Las Vegas with you.”

So his dad did know where he lived. “Yes.” Kieran didn’t know what else to say. A small part of him just wanted to hang up. He should have let Caspar call. But he was a man and he needed to face his fears.

His dad sighed. “I suspected as much. I’ll give their father a call and let him know.”

“As I said, I suspected that was where they went. My brother informed me they were out of town. I didn’t ask questions. It’s a logical assumption they’d go after you.”

“That’s obvious, as it’s you ringing me.”

“And have been arrested.”

“You already said that. There’s no need to repeat yourself.”

“You don’t care?” Kieran asked. Was there no love in his family at all?

“If they were stupid enough to fail and get caught, then they must suffer the consequences. It’s of no matter to me.”

Fuck, Kieran came from this man. If his life hadn’t been detoured at eighteen, he might be exactly like him. “Okay… Well… I just wanted you to hear the news about Marcel and Elijah from me. I guess I’ll let you go.”

“You don’t have anything else to say or ask?” His father sounded disappointed.

Kieran huffed. “What do you want me to say, Dad?”

“How about asking after your mother or sisters?”

Guilt tore at him. “Why?” He channeled his anger. “Have they asked about me? Ever wondered what happened to me?”

His father’s silence was enough of an answer.

“That’s what I thought,” Kieran said.

“What about asking to come home?”

“Why would I do that?” Kieran inquired. “You sent me away. Told me that I needed to become a man.”

“And from the reports that I’m getting, you have. It’s time for you to return to your family.”

“Family?” Rage consumed him. “I have my family here. I don’t need you.”

“The humans and shifters?” His father scoffed. “You’re an Argent. It’s time for you to stop playing around and take on your responsibilities.”

“I’m not playing around. I have a job that I’m good at. I’m in love. I have friends who’d do anything for me,” Kieran told him. “I don’t need you.”

“You will. What’s going to happen when your humans die of old age? Or when your lover falls for one of her own kind? I know all about the people you surround yourself with. The only one I approve of is Jackson Wickham. He’ll be a good contact for the family.”

“Listen carefully,” Kieran demanded. “Stay away from my friends and me. Do not try to contact me. Just leave us alone.”

“You don’t understand, Kieran. This isn’t a choice you can make. You will fulfill your destiny.”

“My destiny?” he spat. “Are you fucking kidding me? I’m done with you. With the entire family. I’m sorry I even called.”

“But you did. Because you have obligations to us. I’ll give you two weeks to return. At that time, you’ll take your place at my side.”

“And, Kieran, I disapprove of coarse language. That is something you’ll have to curb. It’s unbecoming.”

“I don’t give a shit,” Kieran taunted, “what you approve of.”

“Two weeks, Kieran. Or I’ll retrieve you myself and you don’t want that.” His father hung up. He actually hung up on Kieran.

Kieran roared before throwing the phone across the room.

Share what you thought about Family and earn reward points.