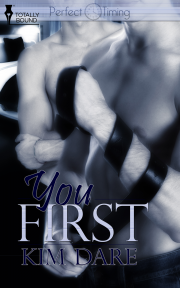 Book 1 in the Perfect Timing series

All Luke had to do was come after Justin. How difficult could that possibly be?

Justin was five years younger than Luke and relatively inexperienced. Luke had enjoyed more lovers than he could count or remember - he knew he was good at sex. There was no good reason why Justin should outlast him every time they hooked up.

All Luke had to do was come second, set his mind at ease, and everything would be perfect between them. Hell, if he could do that, he might even consider the serious relationship idea Justin seemed so taken with.

How difficult could that possibly be?

Please note: The stories in this collection are linked solely by theme. Each story can be read on it's own and the stories can be read in any order.

Share what you thought about You First and earn reward points.