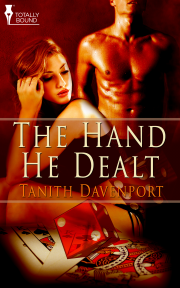 The Hand He Dealt

Nobody can beat Astra Scott in playing the hand she's dealt.

Astra Scott likes to live life to the full. A sorority girl and Gaming Management student, she spends her days studying and practising guitar, and her nights partying or working at the Fountain Casino, where she has an internship as part of her final semester. The only blot on her landscape is Ash Drake, her best friend Sasha's boyfriend. Arrogant, physical and blond, Ash has never forgiven Astra for her rejection months earlier and enjoys annoying her at every turn.

But when Astra's boyfriend Harry reveals a shocking secret, Astra responds in the only way she can think of: by finding a way to take on a more attractive, masculine role in the relationship. Her experimentation with sex toys finds a surprising outlet in Sasha, but when Ash discovers their secret and wants to get involved, Astra finds herself torn between dislike and desire…and as their undercover relationship grows, Astra finds herself falling in love, a path she feels can only end in heartbreak. For Ash may be the only man whose own fantasies are a match for hers, but can she knowingly steal his affections from her best friend?

Reader Advisory: This book contains one scene of pegging/strap-on penetration and scenes of ménage and FF intimacy.

A third red-backed card flipped over on the green baize. The ten of hearts.

With a scowl, the man pushed his chips to the centre of the table and got up to leave.

“Too bad,” Astra called after him. “Have a good night.”

It was four in the morning and the casino was closing. Around the room, the croupiers were clearing their tables and preparing to leave. Astra’s table was the first one closed—as the lights began to snap off she was already halfway to the door.

She passed another croupier, an attractive blonde, just unhooking her coat, her forehead smeared with blood, and she paused.

“Hey, Becky? What happened to you?”

The girl scowled. “Some jerk threw a glass at me. Think he just lost the expense account.”

“Ugh. Men.” Astra could taste the bitterness in her words. “They’re all pricks.”

The cold air hit her like a wall of ice. The skies were still pitch-dark. The night was clear, starlit, the edges of the full moon sharp. Streetlamps spilled pools of light across the sidewalk as Astra started the long walk home.

Thank God she didn’t have an early lecture.

Across the street, shouts and raucous laughter filled the air as the door of a neon-fronted bar opened and a group of twenty-something men fell out. Astra’s stomach twisted as a painful image forced its way into her mind.

Are you out tonight?

She dropped her head, fighting against the picture that haunted her. Oh God, she was beginning to hate this walk home. The surrounding dark engulfed her like a wave, weakening her, dragging her down.

Every time you do this, I lose another part of you, something I’m afraid to forget.

Her feet knew the way home as well as her mind did.

I can’t remember the scent of your hair.

It was amazing how quickly the sidewalk was passing.

I can’t remember the feeling of your breath on my neck.

It really wasn’t such a long walk after all.

She broke into a run, one hand over her face, tears choking her. Astra stumbled up the main road through the campus and into the Omega Zeta sorority house. She dashed up the stairs to the first floor, dived into the bathroom and locked herself in a cubicle.

It was stupid to feel this way. Stupid. But the aching feeling of loss was rarely absent these days.

She had only herself to blame. She had been too intelligent, too arrogant, to believe she could lose herself in the intense gaze of a pair of blue eyes. Too clever to recognise her own weakness in the face of a cheeky smile.

Fuck. The door had opened. She wiped her face and stepped out of the cubicle, her carefully-crafted neutral expression dissolving when she saw the girl turning away from her reflection.

Sasha nodded slowly and turned back to the mirror with an assumed casualness.

Astra caught herself in the middle of a third “Oh yeah?” and stepped behind Sasha. Their eyes met in the mirror.

Astra leant back against the row of sinks and ran her hand through her hair in shock.

Share what you thought about The Hand He Dealt and earn reward points.