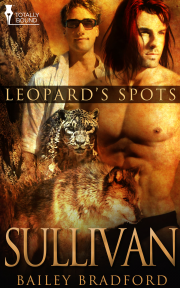 Book 7 in the Leopard's Spots series

Sullivan Ward thought going away to college would be exciting, but he had no idea what adventure lay ahead for him.

Sully Ward was excited about going away to college. A little worried, but mostly excited. He had no idea what an adventure was awaiting him.

In San Antonio, Sully would find a friend, and lose him. He'd find a mate, and lose him, too—but not for long.

Bobby Baker knows he's a contrary wolf shifter. He likes things to be on his own terms, and even when good things happen, unless he's made the decision for them to happen, he can be a total ass.

When he meets his mate, the connection is hot, scorchingly so. It still pisses him off, and he acts like a fool because of it.

Sully won't let him go so easily—and neither will someone else. Someone is out to cause Bobby trouble, and they succeed in hurting someone Sully cares about when trying to get to Bobby.

Unless they work together, they will lose the most precious thing in their world…

Sullivan Ward watched the smooth rock he’d thrown skip across the glassy surface of the lake. He counted six decent hops, then the stone sank with a plop on the seventh. Ripples spread out from the point of entrance, and he wondered what the overall effect was on the lake. Did the ripples cease when he could no longer see them, or did they continue on in some miniscule way, maybe even under the surface? Were there fish and other critters being disturbed by his melancholy mood?

A duck flapped its wings then took flight, perhaps irritated by Sully’s stone-skipping, or merely his presence. Sully frowned as he squinted, putting a hand above his eyes to shield them from the sun. It took him a second to focus as he tried to make out what kind of duck it was, but soon he saw the white patches on its wings, and he had his answer.

"Black-bellied whistling duck," he murmured, surprised to see one on the lake. It was only the third time in his twenty-three years that he’d encountered the odd duck. Well, odd to him. The white bar of feathers on the wings were distinctive, but they’d always looked almost creepy to him with those long pink legs. He looked for another black-bellied whistler and was saddened not to find one.

The ducks tended to be monogamous for the most part, pairing up for years, which was more common in swans and geese, as far as he knew. Sully wasn’t an ornithologist by any means, but he did like to read and research.

Sully hoped the duck hadn’t lost its mate. Maybe it was a young bird—and why was he stressing over a damn duck? Sully sniffed and tipped his chin up. He closed his eyes and dropped his hand to his side as a cool breeze wafted over him. The scent of the water filled him, adding to his melancholy. He was going to miss this place, but he had to leave. Attending UTSA had been a dream of his for ages. Their geological programme might not be listed as one of the top three in the nation, but for whatever reason, Sully had always wanted to attend the large college.

Actually, Sully knew exactly why he’d focused on the University of Texas at San Antonio. He’d had a neighbour—an old, old man who’d passed away years before. But the man, Mr Gustav, had spent hours showing Sully rocks and fossils, telling stories Sully still remembered every word of. Mr Gustav had taught at UTSA until he’d retired. Sully supposed he’d had a doctorate or two, but the man had never said anything about it. He’d just been nice to Sully, giving him attention when he often felt forgotten.

Mr Gustav probably wouldn’t have been so nice to him if he’d known what Sully really was. Well, Sully and his family. They were snow leopard shifters, which, in all fairness, would likely freak out anyone who wasn’t a shifter. And, much like the duck Sully had watched take flight, his kind also mated for life, apparently. That was a relatively new discovery—much of their family heritage had been lost when his Grandma Marybeth’s entire clan had been slaughtered in the Himalayas decades ago. Marybeth had been too young to have learned much about what she was, and so it was still a learning process for all of her family.

It was weird to think that if Grandma Marybeth hadn’t been sick that day long ago, she’d have been killed right along with the other snow leopard shifters. Then Sully wouldn’t be here, and neither would his parents, his siblings...

Sully derailed that train of thought. He wasn’t up to being all deep and moody. Besides, he was leaving for San Antonio soon, and his whole reason for coming out to the lake was to think of the perfect prank to pull on his younger brother Wesley. No way could Sully leave without getting the little shit good. Sully knew he might not be the brightest bulb in the pack, but he wasn’t as dumb as people thought, and he had a wicked sense of humour.

The idea that came to him then wasn’t his best prank ever, but it’d be good, and he wouldn’t have to work too hard to accomplish it. The challenge would be getting Wesley away from his bedroom, but if Sully could do that, well... Sully chuckled and tossed another stone, imagining Wesley’s reaction to the plan spinning in Sully’s mind.

"Did you pack your toothbrush?"

Sully slapped down the little niggle of frustration he felt upon hearing his mom’s question. He knew this was hard on her. He plastered on a smile as he turned around to face her. "Yeah, Mom, and I took a new one, too, so I have one to swap out in three months." That practice had been drilled in him for twenty years now.

His mom’s face scrunched up and her eyes turned watery. "You’ll be back for a visit before then, maybe if you have a long weekend. I can—"

Sully’s heart just about broke and whatever irritation he had been experiencing over his mother’s clinginess vanished under the threat of seeing her cry again. He was in front of her and holding her in two strides. "I’ll be back every time I get a break from college, Mom. I will. And you can come to San Antonio and visit me. We’ll do the tourist thing and eat a lot of Mexican food, walk along the River Walk, remember the Alamo..."

His mom sniffled and clung to him for a moment, then she pulled back and wiped at her eyes. "I’m being ridiculous, I know it. But you’re my baby—I don’t care if you are twenty-three. You’ll always be my baby, and I want you to go." She gave him a weak smile. "I just also want you to stay."

The relationship between Sully and Bobby is so tender at times, it can make you wish for a mate of your own. Bobby is just amazing with his personality and humor, at times I could not stop laughing....

Bailey Bradford's Sullivan is another wonderful addition to this exciting action romance series. I very much enjoyed this saga. The series is best read in sequence.

Share what you thought about Sullivan PRINT and earn reward points.