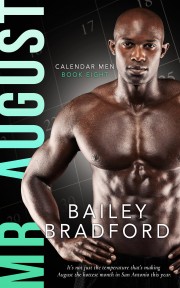 Book 8 in the Calendar Men series

Hector thought he’d escaped his past and had nothing to fear by posing for a charity calendar, but he was wrong.

Hector Torres is a self-made man. He came from the wrong side of the tracks and had a difficult childhood. Violence and crime flourished around him, but one particular event sent him running, and he’s been looking back over his shoulder for a long time.

He thought he’d changed enough to take a chance and do something good, especially in light of his closest friend’s daughter being diagnosed with cancer.

But Hector is wrong, and the man who suddenly appears in his life might be his savior—or his executioner.

“Bro, I am so happy for you both.” Hector Torres hugged his best friend, Tony, ignoring the unshed tears burning his eyes. “Ina’s fine. We both knew she would never give in.”

“Yeah, yeah we did,” Tony agreed, hugging Hector back before releasing him. “It’s terrifying, though. Lots of children don’t quit, and…”

And the cancer still wins. I fucking hate cancer. “But she made it. She kicked this sh—stuff.” He pressed his lips together and reminded himself to watch the cursing. There are kids around, after all.

“She is, and her dad is pretty awesome, too.” Hector nudged Tony. “You’ve been a rock.”

Tony didn’t even wipe at the tears on his cheeks. “Thanks, Hector, but I couldn’t have held it together without the support of my best friend.”

“You could have, but I’m glad you didn’t have to.” Hector handed Tony a tissue. “Now, let’s get this celebration going!”

Two women dressed as cartoon princesses entered the room, much to Ina’s delight. They bestowed upon her a rhinestone crown and a matching wand.

Ina squealed and giggled, then twirled in her flouncy dress.

It was incredible to see her so happy.

Hector clapped and cheered as the nurses and princesses sang to Ina. The little girl had just a bit of dark fuzz on her head where her hair was growing in, now that she’d finished her cancer treatments and the horrible disease was in remission. Her smile was bright and she looked healthier than she had in far too long. Her cheeks even had a rosy tint to them instead of the sickly gray Hector had gotten used to seeing since Ina had become ill.

He loved her like she was his own—he was her godfather and took his role in her life seriously. There was nothing he wouldn’t do for Ina, or for her dad.

Hector danced with Ina then twirled her over to Tony. The party was only a half-hour long, but it was filled with more joy than that short time period should have been able to handle.

After the party celebrating her remission, Ina said goodbye to her friends in the children’s cancer ward, promising to stay in touch.

“She’ll be back for quarterly scans and other tests that have to be done. I’m never going to fully relax until those are no longer necessary.” Tony’s smile wobbled a little. “But she’s going to be fine. Every test will come back clear.”

Ina bounded over to Tony and grabbed his pants leg. Tony scooped her up onto his hip. “Hey, sweetheart.”

Ina beamed at him. “Daddy, can we stop at the princess store on the way home?”

“Of course we can. I promised we would, so let’s go!” Tony nuzzled her cheek.

“Darn right I’m coming. I wouldn’t miss out on it for the world, and I believe I might have also promised to buy a certain adorable girl any princess dress and shoes she wanted,” Hector added. “Hm. Who did I promise that to?”

Hector snapped his fingers. “That’s right! It was you and I did mention a doll, too. Guess we’d better go before I forget again.”

Ina giggled. “You won’t forget, Uncle Hector. You love me.”

Hector melted. “I do.” And if he had to max out his credit card at the princess store to make Ina happy, he’d do so without an ounce of regret. Not that there was any danger of his card being maxed out. Hector had been very smart with his money.

Four hours later, he had to admit—to himself at least—that Ina could indeed put a small dent in his card balance, or more accurately, that he was willing to do so because he didn’t want to say no to anything Ina had wanted. If Tony hadn’t intervened, Ina might have found herself owning her own princess store.

Which might have saved me and Tony money in the future!

Hector sighed, happy to have spent the day with Ina and Tony. He unlocked the door to his apartment. His feet were aching—he should have changed out of his dress shoes before hitting up the mall. Besides the princess store, there’d been a trip to the stuffed animal place, and a few other shops.

As soon as he was inside, he kicked off his shoes then aligned them neatly by the door. He loosened his tie and removed it, along with his suit jacket. Hector hung them in the hall closet before he walked into the living room and sat down. A soft meow warned him right before Epi jumped over the back of the couch. She walked down his chest and belly to curl up on his lap.

“Hey, baby girl, have you been a good kitty today?” Hector petted her and looked around for her brother. “Where are you hiding at, Jin?”

As if waiting for his name to be spoken, Jin bounded up onto the couch and mewled. Hector used his other hand to pet Jin. “Hey, sweet boy.” He closed his eyes and felt every bit of tension drain from him as he stroked the cats’ soft fur. Though he’d known Ina had been cleared of cancer and the doctors had said she was in remission, anxiety was a bitch he struggled with almost constantly. It had kept him worrying that something would change and that her party would have to be called off.

He hated thinking the worst but he couldn’t control his anxiety, and medications—along with therapy—only went so far to help him. Maybe if it hadn’t taken him so many years to admit he’d needed help— No sense in self-recrimination now. That wouldn’t curb the anxiety at all.

When Jin nipped at his finger, Hector opened his eyes. “Time for dinner?” Both cats meowed and leapt off the couch. Hector stood, groaning at having to give up his comfy spot. He’d bought all his furniture for comfort first, looks second. He didn’t put on airs in his own home. The couch and matching love seat, chair and recliner were all made from a soft blue microfiber material that held up well to cat claws.

Not that Jin and Epi were too hard on the furniture. They had several scratching posts and cat condos to claw at. His cats had a nicer room than he’d ever had as a kid, too.

Hector padded across the soft white carpet and into the kitchen. The ceramic tiles felt cool through his socks and he shivered. “Okay, you two. It’s dry food tonight. Vet’s orders. She said you both were getting too chunky.” He huffed. “I think she mistook all that long fur for, er, extra padding.” He didn’t care if people thought cats couldn’t understand what people said to them—he knew his babies did, or at least they caught the gist of what he was saying. Hector talked to them a lot—along with Tony and Ina, they were his closest friends.

But neither Epi nor Jin was pleased with him when he poured the dry kibble into their bowls. They turned their noses up at their dishes.

“Hey, if you’ll eat it, or at least half of it, I promise to give you some candy.” He whispered the last word, but the cats knew what he meant. Their ‘candy’ was a moist salmon treat that they’d gorge themselves on if he let them. “Eat first, babies.”

Hector bent and tapped their bowls. “I’m going to shower, but I’ll be back in a few minutes.” He’d be surprised if Epi and Jin touched their food. They could be quite stubborn.

The slight scent of lavender reminded him that Stacia had been in to clean. She came three times a week and tidied up his place, as well as handling his laundry and preparing a week’s worth of dinners. Hector rarely ever saw her, but he’d had her thoroughly checked out before hiring her, and he’d never had a complaint about her work in the past two years.

He’d never have thought he’d live in such a well-kept home when he was a child. For so long, he’d only been able to imagine more of the same life he’d had back then—cigarette and pot smoke thick in the air, beer and whiskey on the breath of every adult and most of the teenagers he was around. Nightly fistfights and worse. Filth everywhere in the house he’d lived in. It would have taken weeks to clean.

But now he did live somewhere a thousand times better than he’d ever imagined, and he had no need to dwell on his past. He’d escaped that small-town hell and managed to make a good life for himself. If he was lonely at times, that was a compromise he was willing to make for peace and quiet on the home front.

And for financial security. At least food was no longer a luxury.

Shaking off the cobwebs of his past, Hector entered the master bathroom and focused on what needed to be done tomorrow at work. The past needed to stay in the past. It was the present and the future that mattered.

Share what you thought about Mr. August and earn reward points.

Other books in the Calendar Men seriesView Series Page