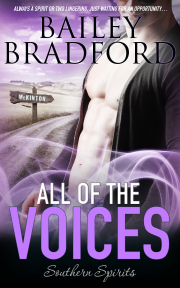 All of the Voices

Book 3 in the Southern Spirits series

The body might be reluctant, but there's more than one spirit willing to step in and keep two stubborn men from walking away from each other forever…

Deputy Matt Nixon has had a rough time of it lately. He's put up with the spirit of his boss's dead lover, been stabbed, and had his fledgling interest in another man cruelly flung back in his face. His only close friend is an elderly woman who gets her kicks from calling in false prowler reports then greeting the responding deputies with a lewd proposition and little clothes.

When he finds her dead, Matt grieves for the old woman so many people snickered at—and he fumes at the idea of her snooty nephew from New York who never bothered to visit her. Matt is going to give Carlin Douglas a piece of his mind if he does show up.

Carlin Douglas hates the small town of McKinton, Texas. The only other time he'd been there was years ago when Zeke Mathers was almost killed in a gay bashing. Now Carlin has obligations that keep him tied to New York, but he doesn't mind.

Until he clashes with Deputy Matt Nixon, a man who seems determined to hate him. But McKinton is a different place, and there's always a spirit or two lingering, just waiting for an opportunity…to meddle.

Reader Advisory: This book is best read in sequence as part of a series but can be read as a stand alone title.

The call from dispatch had Deputy Matt Nixon groaning and rolling his eyes even as he tossed aside his half-eaten burger and started up the cruiser. Ten-fourteens occurred regularly at Mrs. Hawkins’ place, and Matt, like every other employee at the Sheriff’s department, dreaded being on the receiving end of the call. All the times he had been unlucky enough to be on duty when old widow Hawkins claimed a prowler was on her property, not once had there been anyone other than the woman herself waiting for him when he arrived.

And on every single one of those calls, Matt had cringed when he’d knocked on Mrs. Hawkins’ door. Well, maybe not the first time. He’d been inexperienced and idealistic and kind of thought the other deputies were full of shit and trying to pull one over on him. It wasn’t until he’d heard the raspy-voiced widow hollering for him to ‘come on in’ that Matt had faced the slowly dawning, horrific reality. After all, who, if there was a prowler about, would leave the damn door unlocked?

He still shuddered with the memory of that first call, because he’d been so sure the gossip had been just that—gossip and not truth—until he’d started turning that unlocked door knob. Matt had scrambled frantically to recall the rest of the crap the other deputies had teased him about when he was sent to Mrs. Hawkins’, and remembering his fellow officers’ warnings was about the only reason he hadn’t pulled his gun when he’d finally opened the door and been promptly attacked by about two hundred pounds of nearly nude old woman.

“Better watch yourself, boy,” Deputy Sparks had sneered, “that crazy ol’ bitch will be on you the second you get in the door. She’ll be humping you like a dog in heat and—”

Matt had walked away, his stomach quivery over the sheer amount of disdain in the former deputy’s voice.

“The man was a bigoted fuckwad anyway,” Matt muttered, pushing aside the anger thinking of Sparks always brought. As for Mrs. Hawkins, the old woman was just lonely, and granted, her means of getting attention were more than a little startling, but in the past few months, Mrs. Hawkins and Matt had come to a sort of truce. She still called in complaints about prowlers, but she no longer dressed in frilly lingerie when she greeted Matt.

Most of the time she had a plate full of cookies and a glass of milk waiting for him. Matt had offered to stop in and check on her when he wasn’t working, but Mrs. Hawkins had declined. She had her routine, and he wasn’t the only deputy who got called out to her place. He was just the only one who got cookies. The only one who’d befriended the old widow instead of mocking her. The only one who saw the lonely, scared, elderly woman hiding under the façade Mrs. Hawkins presented to everyone else.

It hadn’t been that way between them before Matt had nearly died, but that traumatic event seemed to have made Mrs. Hawkins see past the laid-back persona Matt usually affected. And so between them, they’d forged an odd friendship.

Mrs. Hawkins lived alone a few miles out of town on the remains of an old farm that used to be productive. After the death of her husband, Mrs. Hawkins had sold off most of the farm land, equipment and livestock, keeping only an acre or so surrounding her house.

She also kept several chickens, and Matt hated those damn birds. There was one in particular, a Rhode Island Red rooster, that seemed determined to emasculate him, either physically or through humiliation. If Matt thought he could get away with blowing that damn bird to bits, he’d do it. Maybe he could accidentally back over the evil avian on his way out. No doubt the red menace would be chasing after him, trying to peck and claw at any part of Matt he could reach. God, he hated that rooster!

Matt floored the gas pedal as a wave of unease washed over him. He’d been about half an hour away from his destination when the call came through. Normally he hauled ass to the widow’s place, because you just never knew, but this time, he needed to get there faster. His spine seemed to ice over, sending chilly tendrils throughout his body.

The red rooster was forgotten as fear dug its claws into his gut, spearing him in the same spot he’d been stabbed four months ago. He couldn’t say why or how he knew it was so, but everything in him clamored and screeched in alarm, much like it’d done right before he’d had that knife driven into him.

Matt gasped as his vision dimmed, the memory of the attack springing to life in his mind, the hot slice of the blade through skin and muscle, the agony that rippled right along with the knife. Blinking rapidly to clear his vision, Matt willed the cruiser to go faster even as he took a turn at a speed that nearly caused the vehicle to roll.

He had to hurry, before it was too late. Whatever was going on in his head, Matt couldn’t let it distract him, not now. Not when he knew in some inexplicable way death was coming.

You get all the ghosts with this one and can I say Conner is my favorite now.  There is very low angst in this book, but there is so many hot and sweet scenes...

The reader can't help but get caught up in the sneaky antics of a couple of spirits who are determined to see Matt and Carlin happy, no matter it what it takes. The chemistry between Carlin and Matt...

Share what you thought about All of the Voices and earn reward points.