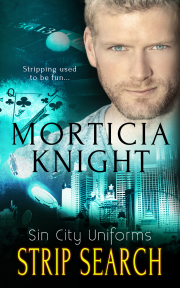 A sexy stripper attempts to escape his dangerously obsessed boss while searching for his missing younger brother.

Stripping used to be fun, lucrative and a place for Dakota to practice for his professional dancing career. But the owner of Glitter Boys wants Dakota for himself and will stop at nothing to possess him. When his thirteen-year-old brother runs away from home to escape their abusive father, Dakota is determined to find him before something awful happens to him on the streets.

Patrol officer Reed hasn’t been attracted to a man in a very long time, but when he’s called to an assault in progress at the LGBTQ teen shelter, a young man approaches him, begging for help in finding his missing brother. An instant spark occurs, but he pushes it away. When the same man is attacked outside a strip club later that night, he discovers the desire is mutual.

As the two men learn more about each other and become closer, the specter of his obsessed ex-boss remains. In addition to that, Dakota has to fight the system to gain guardianship of his brother and keep him out of foster care. Dakota doesn’t know if the hunky cop he’s fallen so hard for can handle a relationship with an ex-stripper struggling to raise a teenager. But, will Reed be able to give up dating women for good and dedicate himself to their new family?

Publisher's Note: This book can be read as part of a series or as a standalone novel.

“Dakota, you’re up next. Jasper called in.”

Ted, the crusty old stage manager and generic maintenance guy at Glitter Boys, stood at Dakota’s dressing room door, idly scratching his crotch while loudly smacking his gum. Dakota averted his gaze so that Ted wouldn’t catch him making a face of disgust. He loved to burst into the room unannounced when Dakota was changing, and also had the disturbing habit of suddenly appearing from the shadows backstage. It was like working with Nosferatu.

Careful not to make eye contact when he spoke, Dakota fussed with a purple rhinestone-studded G-string that he’d just dug out of his dance bag. “I just got here. I haven’t even done my makeup yet.”

“You want me to go tell Yuri that?”

Anger built under his skin. He didn’t mind dancing at a strip club, loved it actually, but the people who owned and ran Glitter Boys were the true definition of lowlifes. Dakota and all the talent at the club were treated like whores who didn’t matter to anyone unless they brought in bundles of cash. It made an otherwise beautiful and showy strip club a nightmare to work in.

Few more good months then I’ll have enough saved up for pro aerial dance classes. Then I can go to one of the smaller clubs where they don’t treat people like shit, get away from these psychos.

“Well? You going out there or what?”

He pressed his lips together. Yuri would be furious no matter what he did. If he wasn’t fully glammed out he’d yell. If Dakota told Ted no and didn’t go on stage, he’d yell. Dakota picked not going on stage. He hated it when he didn’t look his best.

“Nope. No makeup. No dancing.” Dakota finally lifted his gaze. “And I don’t care what you say to Yuri.”

Heart pounding, Dakota hurriedly turned away—mindful to keep his head down so Ted couldn’t read his anxious expression in the mirror. But Yuri and the other goons in charge weren’t much different from feral animals. He couldn’t show fear or they’d attack.

Ted inched his way into the room. The stench of Ted’s putrid, booze-enhanced sweat encroached on him. Ted touched his shoulder and he shrank away, grateful that he still hadn’t removed his Ziggy Stardust tee. Skin to skin with Ted, no matter how minimal, was the last thing he ever wanted to experience.

Add Yuri to that.

His stomach lurched. He shouldn’t have had the French fries on the way over, but a drive-thru snack was all he’d had time for. He hadn’t eaten all day and there was at least a six-hour shift ahead of him. He figured he’d have plenty of time to work off the grease.

“Now, don’t be that way, baby. I’ve told you before, if you’re extra nice to me, Yuri doesn’t have to know shit.”

The door slammed against the wall. Yuri yanked Ted away by the collar of his shirt, then backhanded him. Ted stumbled wildly before falling over one of the folding chairs that littered the room. He cried out in pain as he crashed to the floor.

“You have lots of fucking nerve, piece of shit!”

Rage contorted Yuri’s face, his skin flushed red as he jabbed his finger down at Ted, who lay in a heap of tangled chairs, feather boas and a riding crop or two. His Russian accent always made his words seem so much more menacing. The shouting also added to the genuine terror Dakota felt whenever Yuri had one of his fits.

Ted whimpered, holding his arms over his face as if he expected Yuri to strike again. Dakota agreed with Ted’s assessment. The probability was high that Yuri would continue manhandling and beating him. Dakota was safe from the punches. After all, it wouldn’t do to damage the merchandise.

Dakota gasped when Sauron’s eyes flashed over to him. Yuri was the ultimate doppelganger for the dark lord of Middle Earth. It was in everyone’s best interest to slink by him and not draw his gaze.

“And you. Why not getting ready?” Yuri grabbed the G-string Dakota still clutched in his hand. “You’ve worn this how many times? Huh?” Yuri hurled it into the trash can next to the lit vanity. He got right into Dakota’s face, glaring. He pinched Dakota’s chin between his thumb and forefinger. “This isn’t cheap place! Customer expect hot guy, but also sexy, exciting costume. Not always same shit.”

He let go of Dakota by shoving him away. Dakota grasped the edge of the dressing table to keep from following Ted’s path to the carpet. Yuri returned his attention to Ted, who was attempting to disentangle himself as well as rise to his feet again. The sound of applause and the DJ announcing that Jasper was up next threw Yuri into another fit.

Shit. I didn’t know it was Noah on stage. Dakota always snuck in the back way. It helped to prevent the pre on-the-clock groping.

Yuri lunged at him as if he’d strike. Even though Dakota knew it probably wouldn’t happen, he still flinched. He prayed he’d have enough money saved up to get out of Glitter Boys soon. He was sure that Yuri would eventually make good on his implied physical threats.

Ted had already scampered away to do Yuri’s bidding, which left him alone to face the club owner by himself. Yuri regarded him, let his gaze rake Dakota’s body clad in the tight T-shirt and skinny jeans. If Yuri wasn’t such a detestable human being, he’d be quite a stunning man. Almost ethereally handsome, he had the appearance of a deadly angel with white-blond hair and cruel blue eyes. Even though he was clad in an Armani suit, it was easy to discern his strong and muscular physique. He could’ve snapped Dakota in half.

“Hurry up.” Yuri’s voice had dropped in volume, which chilled Dakota even more than the yelling had. “Ten lap dances minimum tonight, understand?”

“Understand?” Yuri had gritted it out.

“And we talk before you leave. No sneaky stuff like other night. I turn around”—Yuri shrugged—“Dakota’s disappeared.” Yuri leaned in. “Like he doesn’t want to speak to me. Me. The man who’s given him everything.”

“Now I give you much more. We talk later.”

Morticia’s Sin City Uniforms series is addicting. I loved the premise of Strip Search. Stripper with a bad boss, trying to save up for a dream, desperate for the safety of his brother… enter stron...

Share what you thought about Strip Search and earn reward points.