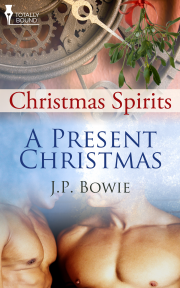 The ghost of Christmas Present…

A Christmas spirit meddles in the lives of two young men in the hope that she can bring them more than just holiday cheer.

Bill Calder, out of a relationship, out of a job, and just plain out of luck becomes the object of attention and affection for Agnes - the spirit of Christmas present - and a little old lady with a mission. Together, she and Bill apply for a Christnas job in a New York department store where a desperate manager hires Bill as Santa - and Agnes as his helper.

It's not long beofre Bill catches the eye of Tom Davenport, a store 'employee', but Bill's low self-esteem after the dismal turns his life has taken, won't allow him to hope for too much from Tom.

Agnes however has other ideas, and with a little magic at her fingertips, manages to manoeuvre the two young men into each other's arms. Thinking her job done, Agnes' satisfaction is ruffled when Tom reveals to Bill who he really is, and Bill's pride won't allow him to take their relationship further.

So, a little more magic is needed…

Agnes sighed heavily as she made her way to her sister’s cottage. No doubt, she’d have to listen once again to the litany of criticism Esmeralda always had for her on these visits. Hopefully, Judith wouldn’t be there to regard her with the faint sneer that always seemed to hover around her thin lips whenever Agnes was in the room.

It was that time of year again, when the world was in rhyme—or so the song went—but all it meant for Agnes and her sisters was that they would be meddling in other people’s affairs in the hope that they could make them see the error of their ways. It was something Agnes had not excelled in for the last couple of years. Particularly last year—oh, that had been nasty. After Agnes had failed to move the miserable old bitch from her miserly ways, it had taken all of Judith’s threats of hellfire and damnation to scare the woman into including her young grandson in her will. And even then, it had been done with ill grace. Agnes hoped she didn’t have to deal with someone that belligerent again.

Esmeralda was standing in the doorway as Agnes walked slowly up the garden path that led to the little cottage in the woods. Like Agnes, Esmeralda was not tall, barely five feet in heels. Their sister, Judith, was the tall one. Esmeralda had once remarked that Judith had to be tall for the future was limitless, whereas the past and the present took up much less room.

“In fact, dear,” she’d said with a patronising air, “I wonder that you have to be almost as tall as me, when the present is so fleeting.”

Fleeting maybe, Agnes had groused to herself, but it could still be a giant pain in the neck! She forced a smile to her pixie-like face as she came within a few feet of her sister.

“You’re late, Agnes dear.” Esmeralda’s pursed lips said it all. It was going to be one of those afternoons.

“And good afternoon to you, too, sister dear,” Agnes said. “Is the kettle on for tea?”

“Of course. Come along in—there have been some changes made to this year’s business.”

“Oh, pocks weed!” Agnes plunked herself down on one of the cosy armchairs by the fire. “What kind of changes?”

“Language, dear. We’re not going to be working together this year. You’re on your own.”

Agnes’s eyes widened. “On my own—but why?”

“Because the young man you’re to help is only too painfully aware of the past, and if you do your job properly, the future will take care of itself.”

“It really shouldn’t be too hard, even for you, Agnes.”

“Huh! Thank you for that vote of confidence. And what will you and Judith be up to, may I ask?”

“Someone in the White House needs a lot of help this year—end of an era, and all that.” Esmeralda handed Agnes a cup of tea. “She’s having to give up a lot, and gain very little in return, I’m afraid. It’ll be my job to help her forget most of the horrors of the past eight years, and dwell only on the good times. I’m sure there must been a few, at least.”

“And who have I got?” Agnes asked. “William Calder, twenty-seven years old.” Esmeralda picked up a file from the kitchen table and opened it. “Five ten, one hundred sixty-five pounds, eyes blue, hair dark blond…you can take this file with you, but from what I see here, he’s recently out of a relationship and a job. Very low self-esteem, is hating the prospect of Christmas on his own—and frankly, the Boss is a little concerned that he may be contemplating suicide.”

“An only child to elderly parents—both deceased, it says here.”

“Poor boy.” Agnes held out her hand. “Let me see…” She took the file from her sister and flipped it open. “Oh, but he’s so cute. Stunning eyes. Boy, those are baby-blues all right—and what a lovely smile—nice teeth.”

Her sister rolled her eyes. “Agnes, be serious. This is an important mission for you—so don’t mess up…”

Share what you thought about A Present Christmas and earn reward points.

For most of my writing career I have concentrated on genres that dealt with detectives, cowboys, vampires and sometimes just regular guys in love. When Claire from Totally Bound asked me if I’d be interested in being part of a Christmas anthology, for a moment or two I balked at the idea of Santa Claus being involved in erotica.