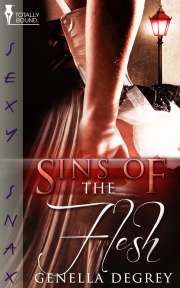 Sins of the Flesh

London, 1893 — A skirmish between Baylian and his own free will, sets the warrior angel in opposition of a demon—possessed female, ensnared in a nightmare of laudanum and prostitution. In saving her, Baylian may damn himself.

Baylian is not your typical obedient angel. Of course he fights on the side of The Light, but his unexplored dark side has an influence over him he'd never expected to succumb so fully to. Meaning to save a whore from a brutal John, he suddenly craves a flesh to flesh mating of his own, but finds out too late that this particular female's soul is in peril.

Rachel Clayton has been disowned by her father and rejected by her fiancé who preferred to keep a mistress even before he and Rachel had said their marriage vows. Now employed by a whorehouse, she sees no way of setting aside a life she didn't choose. At the breaking point and desperate to get away, she seeks an escape. From out of nowhere, a man appears, wanting to be her saviour. The situation is laughable—a man, actually helping her? Then again, she can see no other alternative.

The irony is, this man has lost his memory; he has no idea who he is or where he's come from. Together they investigate and discover an astonishing tale in which Rachel feels she's altogether unworthy of participating.

1893 Baylian had just alighted from a near—battle with Lucifer and his hordes. Michael, his commander in the heavenly army, had expertly defused the altercation once again. 'Twas a pity indeed that weapons weren't drawn. It had been a long time since Baylian had smelt the fear rising from his foe like steam and felt the vibration of his sword as the flame of the blade buried itself deep into the belly of his enemy. Nonetheless, it wouldn't be long before he was summoned to another confrontation. The call to arms came so frequently now that there seemed to be very little time in between those summonses. Baylian didn't doubt that at the next meeting they'd come to blows—The Fallen would soon grow tired of bellowing ominous words followed hard by resigned retreat. Exalting in this latest sense of triumph, Baylian wandered the gloomy alleyways of London in the dead of night in search of... Who knew what? Perhaps there lay in wait, in some abandoned side street, a murder about to take place—a murder he could prevent. It would be another small scrimmage won for The Light. His keen ears caught a human whimper, female, as it floated towards him, muffled by a thick cloak of fog. Unable to determine whence the sound came, Baylian lifted his chin and inhaled through his nose. The stench of helplessness burnt his nostrils. Baylian drew his sword—the blade flared to life, familiar black—green with flashes of purple. A demon was near. Following the scent, he seeped like a ghost through a brick wall and ascended through the floor to the next flight. The musty space held little furniture—a small bedside table with a single candle burning low in its tarnished holder, and a trundle bed dressed with dingy, ragged sheets—and nothing on the walls but a small looking glass. From other rooms in the building came audible, passionate cries, and grunts of exertion. In moments, the realisation hit him like a blow to the stomach. He'd just stormed a brothel. Atop the bed was a couple. The female's buttocks bounced up and down with the help of her lover's hands upon her hips. Her coiffure dangled in strands down the centre of her back in a tangled mess, nearly reaching to her rounded bottom. Baylian stood, time and space frozen around him, and stared at the sight. The man below her drove into the girl with violence and she practically screamed with each thrust. His hands held her in place. The skin into which his fingers sank shone white and red between each digit. Baylian had never laid eyes on such a brutal coupling. "You've a tight li'l pussy," the man growled into her ear, then bit down on her shoulder. The girl didn't seem to notice the pain of the bite, but, each time the man shoved his cock inside her, Baylian could feel her agony from where he stood. Why did the man pursue her so? And who had granted him permission to abuse her in this way? And what gave Baylian such a fierce urge to participate? There was no rationale for it, but bearing witness to such a sadistic, carnal act made his stomach tighten and flip over with anticipation. With an intensity that took him aback, Baylian longed to taste the experience of occupying her body in the human way, to feel the warmth of flesh against flesh, to sense her soul mating with his. The man released a moan and, mere seconds later, he let the girl go. Baylian could still see the finger—shaped bruise marks on her hips and arms. She rose up on her hands to remove herself from him, when he shoved her to the side. "Get off, whore." His voice sounded gruff with disgust as she fell from the bed onto the floor. "I'm finished wiv you." He got up, stepped into his trousers and shoes, then pulled his shirt over his head. Tucking his tails haphazardly beneath his belt, he pulled on his well—worn, brown jacket that sported large black patches over the elbows, then shoved his dingy grey derby over his greasy, thinning brown hair.
Buy Now

Share what you thought about Sins of the Flesh and earn reward points.