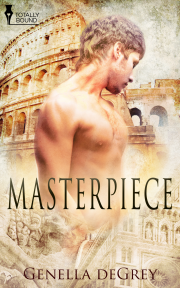 It is the dawn of the Italian Renaissance. A handful of women painters and sculptors emerge from the male-dominated middle ages to stand out among the crowd. A promising young painter, Gia Vessa, has just moved to Rome after the death of her father and immediately catches the eye of a handsome, wealthy man who seeks to become her benefactor. But what else will the sensually dark man want from her that she'd be more than willing to give?

Handsome as the Devil himself, the affluent art collector, Pietro Scarabassi has a secret. For thousands of years his spirit has waited to find the soul of Ciri, the young woman who gave away what he felt was rightfully his—her virtue—to some unworthy whelp. Now that he has finally found her manifested into the human form of Gia Vessa, Pietro will stop at nothing to destroy her and her lover.

Trapped inside a stone pillar that was once part of a Grecian temple of Venus, Zander has witnessed lovers worship each other and the goddess for centuries as he waited to be freed. Finally the day has come and he is able to use the few supernatural gifts the gods have bestowed upon him, but he must determine who houses the soul of his lover, Ciri. Once he finds her, he must foil the plans of their enemy, slay the demigod in human form and end the curse forever.

“But Signora Fontana—five thousand florins?” Gia Vessa asked, still unable to comprehend the substantial amount of money being offered for one of her paintings.

“I am getting the better part of the deal, signorina. The piece will have a place of prominence amongst the others in my collection.” At fifty-three years of age, Lavina Fontana was a master artist. She patted her young prot�g�e on the hand as they sat on Lavina’s terrace, just outside the Vatican.

“But you already have three of my works.”

“Hush now, mia dolce. You have great potential as an artist. I wish to help you as I had help when I was first starting out. Now, no more talk of filthy money.” She leaned closer to Gia. “What of your mysterious new benefactor? Is he as handsome and sinister-looking as they say?”

Heat crept up Gia’s neck to enflame her face. She couldn’t have dreamt up a more darkly alluring man. She nibbled briefly on her lower lip and contemplated her answer. “He is terribly handsome, Signora Fontana,” she said in hushed tones. “Sometimes I think he is the devil himself come to tempt me!”

“My sources tell me he is quite wealthy.” Lavina looked at Gia from the corner of her eye. “Has he kissed you yet?” she inquired, a devious grin playing about her lips.

After this conversation, Gia was certain her cheeks would be forever stained crimson. “No, no, Signora Fontana—he doesn’t even know I exist! As an artist, perhaps, but certainly not as woman.”

“Ha! I do not believe he is that ignorant! Signorina, are you not aware of your beauty? Your violet eyes, your shimmering, burnt umber hair... No, I think that you deny what everyone else knows to be a fact.”

Gia focused her gaze on the toes of the soft, leather walking shoes that were peeking out from under her russet skirts as she re-adjusted the knot of the cream coloured kerchief behind her neck. There was nothing special about her. She was plain. Naught about her stood out—not like the other girls she’d grown up with in the little hill town of San Leo, with their wheat-gold hair and light coloured eyes in varying hues of ocean-greens and sky-blues. “Signora Fontana, you are too kind.”

Lavina stood and took Gia by the chin. “You mustn’t be so shy, mia dolce. You must taste the bread before you make an agreement with the baker.”

Gia looked at Signora Fontana, awaiting an explanation of the metaphor.

Lavina smiled. “Would you buy a cow without knowing how sweet the milk tasted?”

Gia leaned towards her mentor. Perhaps she wasn’t hearing her correctly.

“Let him taste your lips, mia dolce—there is no harm in that,” the older woman whispered.

“There is nothing wrong with a little teasing now and again. Who invented kissing, do you suppose?”

Gia felt as if she were twelve years old again, sitting on her father’s knee, listening to him fumble through the answer to her question about boys and kissing. The girls in the village had told her about how a man takes the maidenhead of a woman with his prick, but their stories had lacked the precious details of what else happened between the sexes. Her father was all she’d had growing up, her mother having died when Gia was very young. Father had loved his wine. He’d evaded her question, answering her using words she did not understand—could not understand at that age. She had vowed never again to approach him with feminine, whimsical matters, and had kept her promise until he’d passed on two months ago. Now she gazed at her wonderful patroness, looking like a simpleton. She shrugged a shoulder in answer to Signora Fontana’s question.

“Why, God did, of course.” Lavina smiled.

Gia glanced down and attempted to relax the fists in her lap. “Signora, is it proper to think of such things?” she asked quietly.

Lavina laughed and returned to her seat across from Gia. “You have been sheltered for far too long by your father in that tiny village. You are twenty-five years old now and, by Venus, you should be thinking of such things, as you say! We are artists. Of all God’s creatures, we are the most passionate. And we draw our inspiration from many things, mia dolce.

“He does have the most beautiful hands I have ever seen.” Gia grinned as she revealed the dark secret to her best friend.

Lavina leaned towards Gia. “Let him kiss you. Let him touch you with those beautiful hands of his. You will know when to stop, but I warn you, he may not want to. You must be firm with him. Tell him...tell him you need some time. This is a good way to make a man come back for more, eh?”

“Buono. See how the mood takes you. Let him set the pace.” She winked.

While Lavina called to her servants to set out an early supper on the terrace, Gia’s thoughts drifted to tomorrow. Now she anticipated the meeting with Signore Scarabassi even more than before. Her dreams were already so vivid she sometimes couldn’t tell them from reality. The union of Gia’s fertile imagination and Lavina’s encouragement had imprinted visions of detailed illumination in the young woman’s mind that were sure to haunt her mind during waking as well as sleeping hours.

Share what you thought about Masterpiece and earn reward points.