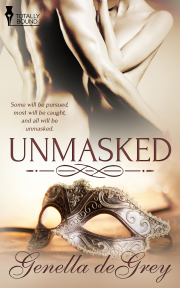 Some will be pursued, most will be caught, and all will be unmasked…

Venice, Italy, 1795—Gwendolyn Rawleigh has done something she should be ashamed of, but is confident that all repercussions will be avoided—if her companions keep the scandal to themselves. After all, she took this holiday not only to elude the infamous marriage mart, but to have a chance at making her own match, too. Her confidence shines brightly, but her lack of experience could send her headlong into the dark sensual autonomy of Carnival.

Ellie Appleton innocently watches Gwennie charm her way around the Venetian ballroom, longing to be as poised and elegant as her best friend. But in the darkness of her room she hungers for the touch of a man’s hands, to feel his lips on hers and to explore the forbidden secrets of her own wicked fantasies.

After finding out that his sister lied about procuring a proper chaperone, Weston Rawleigh, Gwendolyn’s twin brother, is obligated to stand in as escort for his sister and her best friend. Pity that his chances of finding a bit of sport on this trip have been considerably lessened, which is a shame as Venice is famous for its accomplished courtesans and his usual tastes lean toward the sexually experienced. Most unexpectedly, he begins to find Ellie’s artlessness more than intriguing—even though he wrestles with his conscience about it at every turn.

Marcello Verdante’s enemies have chased him out of Florence, threatening that if he attempts to remain in Italy and petition his claim for the Medici fortune, he will be killed. But when Gwendolyn Rawleigh turns his head while he hides out during Carnival, he can’t keep his eyes—or his hands—off of her.

They call it ‘carnal knowledge’. The tension melted from Weston’s shoulders. It was nothing short of divine the way certain women just knew how to fulfill a man’s desires, such as the one now sucking his cock. Somehow, she’d known every sweet spot, every pressure point on his torso and below that triggered the ultimate bliss in which he was now entrenched. It had taken little effort to lay down his money and body without so much as a few words.

“I wish a room with a bath and a proficient female companion, please,” he’d respectfully requested in Italian and slipped a purse-full of silver ducato into the madam’s palm. It was likely an overly generous sum, but he was on holiday. And wasn’t the whole purpose of saving a hefty portion of one’s income all winter long to indulge one’s self in pleasures untold in lands far away?

He’d garnered the directions to this recommended establishment from a couple of his well-traveled peers back in London. And oh, how right they’d been to suggest this particular house.

The woman between his legs fondled his balls as her jaw went slack. She grazed the head of his penis against the roof of her mouth and down her throat.

His orgasm was building, but he was in no hurry. He needed this. He’d gone without for the longest time since he’d discovered the magic of being buried hilt-deep between a woman’s lips—either the top or the bottom set. Either way, didn’t matter to him just as long as she was accomplished in the baser arts. So he’d allow her free rein of his body for now. He drew a deep breath and exhaled a moan, sinking further into relaxation.

His sister and her entourage would arrive within mere hours, and he’d be obliged to spend at least one meal per day with them. While he loved his twin sister, he’d much rather spend his time in the luxurious brothels of Venice. Discretion was not foremost in his mind here as it was back at home. No one knew of him in this beautiful city, which would equate to no wagging tongues—save the one licking a circle around his anus at this very moment.

And with a companion who knew the lay of his land, why would he want to be anywhere else?

The woman stopped for a moment to enquire of him in Italian, “Can I do it differently for you?” In her eyes hung what could only be self-doubt.

“No, no. You are doing just fine, love. I’m taking my time not because of your skills—which are exquisite—but for reasons that have to do with my travels. I came directly to this room off the boat from England, you see, and it was an uncomfortable if not awkward crossing, to say the least. So, please continue.”

“Si,” she replied with a grateful grin and licked the head of his cock, drawing it into her mouth once again.

Smelling of French-milled soap, Weston waited at the end of the jetty, waving back at his sister as she stood upon the bow of the approaching Royal Navy ship. Slow was the going, but now that he’d been properly gratified by that achingly competent Venetian woman, he’d found a heavenly new patience.

“Weston!” She waved. “You look like you belong here,” she shouted above the din of the sailors, scuttling hither and yon.

He smiled at her observation. Had he no other obligations for the rest of his life, he’d surely consider living here. But as it was…

He strode over to the gangplank and, once Gwen reached the bottom, he greeted his twin sister with a tight hug. “Is the Admiral’s daughter properly wed, then?”

“Quite. The ceremony at sea was rather impressive. She is now on her honeymoon to her new husband’s familial holdings in Austria. We are the last civilians to disembark after the wedding. Admiral Forbes was so accommodating. He lent us his cabin once all the other passengers had gone.”

She seemed overly chatty at the moment—even for Gwen—but he ignored the girlish inclination. “And where is Miss Ellie?” His gaze landed at the top of the gangplank. Wherever his sister ventured, her best friend wasn’t far behind. He quickly scanned the fore and aft of the portside deck but she was nowhere to be found.

A few sailors swept passed them. “Gwen, where is Ellie?”

Gwen made an unnecessary study of her gloved fingers.

The men who’d just disembarked laughed, drawing Weston’s attention. There, just ahead of them, he spotted a young woman, scurrying towards the palazzo of Signore Bernardo, the host for their holiday, a leather valise in each hand. He took in the sight of the unmistakable bounce of her lush, chocolate brown curls from below her bonnet and the tiny waist set atop her fashionable, blue silk brocade-draped panniers. It was, without a doubt, Ellie Appleton.

He released his sister. “Gwen?” He’d be the first to admit that his tone was accusatory, but Gwendolyn Rawleigh wasn’t exactly the type of girl whom anyone with a brain trusted implicitly.

He waited for her explanation, but when he realized that none was forthcoming, he began to feel the familiar tension creep up his neck.

“Sister, dear, would you be so kind as to enlighten me with the truth?”

Her gaze flickered to Ellie’s retreating form and back. “Ellie went to enquire with Signore Bernardo about the rooms. Wasn’t it kind of him, being an old friend of Father’s, to have offered us a stay at his palazzo?”

Ah. She’s chatty because she’s done something. Good God, what now? “Don’t lie to me, Gwen. Ellie wouldn’t have gone ten steps without a chaperone.” His gaze once again scanned the immediate area. “By the way, where is said faithful dog?” Weston had expected one, if not two elderly companions to disembark from the ship at any moment.

At that moment, Gwen’s and Ellie’s trunks were brought down the gangplank.

“Oh, good. Please take them to Castello 4196, on the Riva degli Schiavoni, and ask for Signore Bernardo.” She pointed in the general direction of where Ellie had, in her haste, disappeared to. “Come along, Weston.”

She made to step around him but he wouldn’t permit it. “I want answers, Gwen.”

Share what you thought about Unmasked and earn reward points.