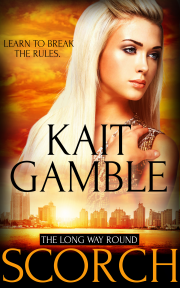 Book 3 in the The Long Way Round series

Even good girls can learn to break the rules.

Chelsea had a plan for her life. She worked for it. Played by all the rules, did what was expected of her—only to be left starting her life over from scratch.

Luckily, she has great friends who help her out, which leads to her becoming the hostess of one of the hottest restaurants in the city—one with an even hotter head chef.

Aloof and mysterious, Daniel is as disciplined as they come. But when he sees Chelsea’s growing interest in him, he directs his full focus on her. He knows it will take time and patience to crack the walls she’s erected around herself, but when he finally does, it will be worth the effort. Then maybe he can let her know the real him.

But can Chelsea break her rules and let Daniel in?

It was supposed to feel different—being on her own. Having her own space. But rather than the freedom Chelsea had expected and wanted, rattling around the place left her feeling as hollow as her apartment.

It’d been a few months—well, more than a few. It’d been almost a year since she’d been unceremoniously dumped by Richard ‘The Rat Bastard’ the night before their wedding—by text—and her apartment was still nearly as bare as the day she’d moved in.

It was her own fault she was left with nothing. In hindsight, she knew she’d been the one to make the conscious choice to drop everything and move across the world with Rich. She’d left family, something her mother still relished reminding her about, friends… Her entire life. And for what? In the end, she’d returned with nothing but embarrassment and more than a hint of shame.

It had been devastating, but Chelsea knew that she could—and would—pull herself out of it. Her world wasn’t going to fall apart simply because he wasn’t man enough to take the leap into matrimony.

Amazingly enough, as if no time had passed at all, she’d managed to pick up her friendships right where they’d left off. Cara and Natalie had been amazing. Jason and Sebastian also. Together they’d gotten her re-employed, found her a place to live and even offered to hunt Rich down and pull out his toenails. Chelsea was glad to accept help in all but the last.

She just wanted to forget Rich and everything associated with him.

She shoved him out of her mind. It was time she got to work. She wasn’t going to let Cara down after she’d given her a job as hostess at her incredible restaurant.

Chelsea liked to get in early and help out wherever she could. She knew Cara didn’t expect it, but she wanted to be there for her friend, especially now that things were really picking up for her.

The thought brought a smile to her lips. A few months back, Jason had come to Chelsea with a couple of monumental plans for Cara and himself. It was her job to keep Cara distracted, keep the restaurant running while he did his thing, and help out with the planning of the gift he had in mind for Cara. And a new restaurant needed a lot of work.

Jason was up for an epic struggle against her friend’s legendary stubbornness, but hopefully the two would be happily engaged soon. And she was thrilled for them. She just wished that they didn’t feel they had to tiptoe around her to spare her feelings. No amount of reassurance from her that she was fine convinced them that she was anything but miserable.

She was glad for all the distractions. Chelsea knew that Jason had come to her because, as Cara’s best friend, she knew her plans, dreams and exact vision for the expansion of her brand. But she also suspected that he wanted to help keep her busy, though he never mentioned Richard.

She was blessed to have such good friends.

Chelsea straightened her pristine white blouse and brushed her sharply ironed black silk trousers as she looked at herself in the mirror. Her makeup was impeccable, as was her hair, but she couldn’t disguise the look in her eyes.

Sighing, she grabbed her bag and strode out of the door. There wasn’t anything she could do about how she looked right now.

Chelsea arrived to find that head chef Daniel was already there, as usual, as were some of the wait staff. His tall, lean form disappeared into the kitchen just as she walked in the door.

She was greeted by a chorus of greetings from those in the room, but none from him. For a long moment, she wasn’t sure if he’d heard her or not. But he re-emerged and nodded in greeting before disappearing again.

She was used to his aloofness. When she’d started working at the restaurant, she’d been sure the man hated her. He’d barely said two words to her the first week she’d been there. But over time, she’d began to realize that he was quiet, intense. It made him quite the enigma, though she was pretty sure it wasn’t by design. It was just who he was.

This is a quick and satisfying read! I wholeheartedly recommend Scorch and the entire Long Way Round series!

Share what you thought about Scorch and earn reward points.