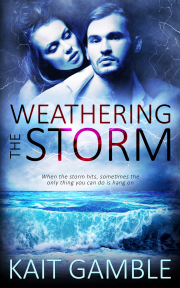 When the storm hits, sometimes the only thing you can do is hang on.

Maia Reynolds is a successful travel writer for one major reason—her entire life is focused on work. Only one man has ever managed to get past her barriers and he’s the reason why she’s closed herself off from everyone else—and she’s just thrown champagne in his face.

Heir to the Girard Group, Alexandre is used to women throwing themselves, not their drinks, at him. He’s intrigued by the beautiful and maddening Maia, but the tale she tells him about their supposed past can’t be true. Can it?

The head trauma he suffered years before has left a blank space in his memory that Maia seems to fill, but he knows she’s hiding something. Until they clear up the past, they won’t be able to build the future that’s beginning to form in his mind.

But will she ever trust him enough to truly open up again?

When Maia Reynolds had arrived in Nice, she’d had a list of things she was going to do. Work? Yes. Do some sightseeing and shopping? Absolutely. But coming face to face with the man who abandoned her nearly a decade before and flinging a drink in his face? Definitely not on the itinerary.

She stared at Alexandre Giroux’s stunned, dripping face with great satisfaction, and strode out of the restaurant.

No, it hadn’t been on the agenda, but it had felt damn good.

She burst out of the building like a cork from a champagne bottle. Sadly, the fizzy, good feeling wasn’t to last.

The heavy door slammed and rapid-fire French shouted at her ended the euphoria in a heartbeat.

Maia’s determined steps remained unaltered as she hurled over her shoulder, “I don’t speak French, remember?”

“How the hell would I know that?” he growled. His long legs closed the distance between them easily as he reached out to snare her.

His hand closed around her arm and he spun her around so she was barely a breath away from his hard form.

Alexandre. So close she could feel the heat of him. Smell him. Sense the ire flaring from him in searing waves as he glared at her with blue-gray eyes as dark as the sea midstorm.

And still, clenched with rage, he was the most handsome man she’d ever seen.

Maia had forgotten how tall and physically dominating he was. How just being in his presence could knock the breath from her lungs. Even as angry as she was, the skin under his hand hummed with awareness. She couldn’t stop herself from gravitating toward him—her body still inexorably drawn to his.

Maia balked at the way her body responded to him. After all these years, after what he’d done, he still overwhelmed her senses.

His grip tightened on her arm as he glowered at her from under jet-black eyebrows. “Who are you?”

She glared at him. “Like you don’t know. Let me go.” Maia tried to shrug out of his grasp but couldn’t get loose of his iron-like grip.

Alex turned her toward him again. “Not until you tell me who you are and why you think I need to be publicly humiliated.”

Maia stared up into those incredible, penetrating eyes of his and fought away the memories, letting only the anger and hatred through. “Are you kidding me?” She tore her arm out of his grasp and continued her march.

He caught and gripped her hand, anchoring her to the spot. “No, I’m not.” His voice was quiet, deadly. It was enough to turn Maia around. They stared at each other for a long moment. “I have no idea who you are.”

“Alex?” Neither one of them had noticed that a beautiful dark-haired woman had followed them onto the sidewalk.

“Ҫa va, Angelique.” Alex waved her back into the restaurant. She reluctantly obeyed after a long, speculating look at Maia.

Maia shook her head. “You should get back to your date. You wouldn’t want her to think that you’ve abandoned her.”

He stared at her, eyes narrowed in suspicion. “I might not have a clue who you are, but I suggest you never let me see you again.”

“Not a problem.” Despite his words, he didn’t seem to be in any hurry to let her go. Maia had to claw at his hand to wrench hers from his grip.

Throwing his hand back at him, she stalked away, leaving what she imagined to be a very angry-looking man staring narrow-eyed at her departing form.

Trembling, she raked her shaking hand through her hair. Maia had never let her emotions get the better of her like that before. She prided herself on having perfect control over herself.

Less than five minutes in the same room as Alex and that was shot to hell.

As if she needed further proof the man was toxic.

Maia took a deep breath as she approached the glamorous hotel that was to be her home this week and sighed.

It was over now.

Dumbfounded and furious, Alex watched as the enraged brunette stomped away while his pulse thundered in his ears. What the hell had just happened?

He had walked into the restaurant to enjoy a quiet dinner with his father. There was a writer visiting whom he wanted Alex to meet. He’d mentioned something about them writing an article on the reopening of their hotel. It had been important to his father, so he’d dropped everything and flown in.

One moment he’d spotted his father and was making his way to the table and the next, he’d been soaked by a tiny, spitting mad, brunette wildcat who seemed to think he knew why he’d deserved it.

She was stunning in her fury, whoever she was. The wrathful fire that flared in her dark eyes as she’d scowled at him wasn’t something he was used to seeing from women in his company. Nor were the pure hatred and bile. What was she playing at?

Whatever she was thinking, he wasn’t about to let her get away with humiliating him the way she had.

Alex’s eyes zeroed in on her as she wove determinedly through the crowd. Was she drunk? Insane? He swiped what was left of the champagne off his face and shirt then followed her. He didn’t care what her motive was. No one did what she had and walked away from him.

Alex single-mindedly tracked his prey, watching her wind her lithe body easily through the crowd with the dexterity of a dancer. She twisted this way and that, giving him a good idea of the body hidden under the simple black dress. Pert breasts, long, lean legs that led up to a deliciously curved bottom—what the hell was he thinking? His internal rebuke didn’t deter the throb of awareness his body had in reaction to watching hers.

There was something about her. The way she felt against him, the way her body fit into his, made him all but forget about Angelique. Everything other than the mystery woman had faded away. He hadn’t cared about anything else. But why? He didn’t know her. Despite her words, he had no inkling who she was. Yet he wanted to find out more about her. It wasn’t an impulse he had very often. Why now? Why her? She’d all but attacked him. The last thing he should feel for her was lust.

Alex shook his head. It wasn’t lust he was feeling. It was anger. He wanted retribution.

He stayed a good distance behind her until she reached a familiar sight.

With a sardonic grin on his face, he pulled out his phone as she walked through the entrance.

Oh, how he loved karma.

The story as a whole was fun and enjoyable to read. The steamy scenes were light and hot, but done with taste. I think this is my third Kait Gamble book and it only shows that I have enjoyed her writi...

This book was an easy read for me, having finished it in one evening. Maia and Alex met in college but events beyond their control led them to completely different lives.

Share what you thought about Weathering the Storm and earn reward points.