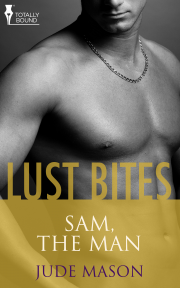 When Greg Jackson's wife passes away after a prolonged illness, can the care giving, flamboyantly gay, Sam Nicholson, convince him that being a bad boy is a good thing?

Sammy Nicholson might be helping a terminally ill young woman at the local hospice where he volunteers, but it's her gorgeous hunk of a husband he's falling for. Flaming gay and caring to the core, Sammy wants to give much more than just consolation to the grieving Greg Jackson.

Sparks fly between the two men as the very masculine Greg discovers the comfort of becoming a sexual submissive. But love, which Greg had vowed eternally to his wife, is another thing altogether-and something Sammy wants badly from him.

Reader Advisory: This book was previously released with another publisher. It has been revised and re-edited for release with Total-E-Bound.

Sammy checked Jean’s vitals carefully and nodded, comfortable in the knowledge she was no worse, for the time being. He straightened the covers, tucking them in under her armpits and running his hand over the blanket. He sat on the chair at her bedside and laid his fingers over hers, paying attention to avoid moving the IV in the back of her hand. “How are you tonight, Jean?” he asked softly. She shifted her body and opened her eyes. Eyes that appeared too bright, too focussed. “I’m okay. They gave me some drops a little while ago. Everything feels dull. Like I’m not really here.” She licked her lips. “That’d be morphine, hon.” He reached for the glass on her bedside table and offered the straw to her. “Want some water?” He sniffed at the clear liquid and added, “Yup, water. You’d think they could add a shot of vodka or something.” Jean smiled, a weak, wispy thing that quickly faded when Sammy helped her take the straw. Her sucking sounded loud. When she finished, the glass was empty. “Vodka might go nice about now, Sammy.” Her smile came back and remained a few moments. When it faded, she asked, “Where’s Greg? Is he all right?” “He’ll be here soon. You know how long it takes for him to get here from his job.” “Yes, too long. I’d like to see him move on. He’s such an amazing man. He doesn’t deserve to have to go through this.” A tear made its way down her cheek, ignored. “No, he doesn’t. But I’m sure he wouldn’t have it any other way.” He leant down and pressed his lips to her forehead. “He’s going to be fine. I’ll do all I can to get him over the worst of what’s going to happen.” Sammy knew Jean had accepted her fate—after she’d got through blaming the doctors, her parents for the genes they‘d given her and the disbelief that this could actually be happening to her. There had to be some catastrophic mistake, didn’t there? She’d moved on to anger at the world, and the cruelty of whatever gods she believed in. Finally came acceptance. She really was going to die, like everyone else. But she would die a little sooner and have a better idea of the timeline. “You’ll make sure he doesn’t dwell too long on what’s happened to me, won’t you, Sammy?” “I’ll do my best, Jean.” Sammy rose and took the glass she’d emptied into the bathroom, where he refilled it. When he returned, he sat down and offered it to her again.
Buy Now

very intense and emotional...Thank you Jude.

If you like stories with a twist...you may find this an interesting mix...very hot reading...

Share what you thought about Sam, the Man and earn reward points.