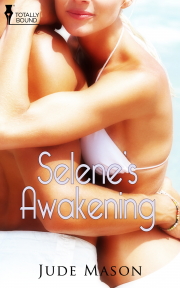 Take a gorgeous, Canadian alpha male, who's fled the rat race and moved to the woods, and add an equally gorgeous, but spoiled, British woman with an attitude and buried submissive tendencies and what do you have? World War III? Love? Maybe a little of both?

Disillusioned with the world and all its civilised gadgetry, David Wolf moves to the wilds of Western Canada's forests. Selene Jordan, one of the rich and infamous, is from the UK. She has it all and isn't afraid to show it off, or berate anyone who doesn't have as much.

Selene is vacationing in Canada and manages to run her pretty blue sports car into a ditch, and knock herself out in the process. David finds and rescues her, much to his chagrin later. She tries ordering him around and refuses to do anything to help herself or make his life easier. Yet, David keeps his calm. After all, she's not going anywhere, and he's got a plan.

Will Selene learn to pull her own weight? Or will David have to teach her a lesson in proper guest etiquette? Sparks fly and emotions run hot as these two vie for the alpha position. A position that only one of them really wants.

Leaning against the rough bark of an old cedar tree, David ran the rag over his face, sopping up some of the sweat that had trickled into his eyes. His eyes stung. His back ached from the steady, monotonous swinging of the axe, but the clearing was getting bigger. Soon it would be large enough for the garden he planned.

He flipped the long ponytail over his shoulder and wiped his chest with the damp cloth, then tucked it back into the rear pocket of his jeans. Gazing across the stump strewn field, he groaned, thinking about how difficult pulling those babies out was going to be. The gravel roadway just beyond was silent, as usual. From the angle of the sun, he figured he had about an hour before night fell—half that time to actually work.

“Better get back at it,” he muttered and pushed himself away from the tree. The axe gripped tight, he wrestled the next round of wood onto the splitting block.

He soon found his rhythm—lift, place and swing, then flip the cut pieces to the side. The pile of firewood grew steadily, until daylight went and he had to stop. The muscles in his arms and shoulders hummed with fatigue, but he piled as much wood as he could into his cart before he felt he could call it a day. The handcart held enough wood to keep him going for a few days, and the large wheels made it easy to transport. Building it had been a stroke of genius.

David manoeuvred the cart onto the narrow gravel road and began the trip home. Half a mile to ponder the chores he still had to do in order to meet winter with enough supplies. He hated going into town and hoped he’d get away with a single visit this year.

Pushing his supply of firewood forward, he spotted ruts in the gravel and wondered when someone had driven a car along the pothole riddled road. He couldn’t recall hearing a motor, but thinking about that, he wasn’t surprised. He got into a zone when he worked and he definitely hadn’t been expecting anyone.

Salmon berry shrubs lined the road, their brilliant red berries ripe and ready for the picking. Tomorrow, he might make jam. He loved preserved wild berries and the summer had been good. He made a mental note to check the crab apple tree he’d found last year.

Leaning forward, he gritted his teeth and pushed hard against the metal bar, straining to gain enough speed to make it up the final hill to the cabin. He eased the cart over to the right side of the road, preparing to round the corner leading to the hill. A hundred feet ahead, he saw something in the ditch. Sunlight bounced off metal, bright blue and silver.

“What the hell!” The words exploded when he realised he’d found the car that had brazened the rough road. He dropped the cart handle and stepped over it, rushing towards the wreck.

Share what you thought about Selene's Awakening and earn reward points.