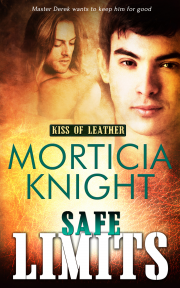 Book 2 in the Kiss of Leather series

The men from Kiss of Leather gather together to rescue a terrified young sub. But it’s Master Derek who wants to keep him for good.

Corey ran away from his Master after a horrible scene, but he blames himself for everything that happened. No Master would ever want him if they were to find out what he did. Corey’s not sure if he’ll ever feel safe enough to give himself to a Master again anyway, even if all he’s ever wanted was to belong to somebody.

Master Derek agrees to watch over Corey until Josh and David return from the convention. All he needs is another pretty twink messing with his head and his heart, so the older, growly bear of a man determines to keep his distance. But when Corey wakes up screaming after a devastating nightmare, Derek is more drawn than ever to the young sub—the need to keep Corey safe from whatever or whoever has hurt him becoming his main priority.

Kyle and Corey develop a friendship when Corey assists Kyle in the dungeon furniture workshop. Kyle has his own fears—the ones that make him feel he’s broken because of the things he desires to do with Gavin. Through helping Kyle and receiving his own help via Derek, Corey decides he’s ready to let go of the demons from his past and move forward into a new life.

Now if Corey can only get Derek to believe that he’s ready—and to finally do something about it.

Reader Advisory: This book contains a flashback scene of rape by multiple aggressors.

“I can feel you thinking, boy.”

Kyle couldn’t help but smile against Gavin’s broad, sculpted chest. He was enfolded in his Master’s embrace, warm and safe in his arms. He barely remembered Gavin carrying him from the downstairs dungeon in their home up to the third level where their bedroom was. After his emotionally draining first session with the violet wand, he’d dropped hard—had panicked. Once Gavin had revealed his love, that knowledge had driven the terror from Kyle over whether he might lose the man who was, and who he knew always would be, the most important person in his life.

“No.” Gavin squeezed him gently. “I’ve been awake for a while. But I didn’t want to disturb you after the intense session you had last night. I wanted you to get as much rest as possible.” Gavin angled his body back seemingly so he could capture Kyle’s gaze. “How are you this morning? Any more concerns or fears about us? About anything?”

Kyle stared into Gavin’s deep brown eyes, drank in his perfect dark skin, reveled in the sensation of being held by such a strong and solidly built man. He never would’ve had the courage to approach such a fine male specimen on his own—his over-abundant blushing would’ve made him faint on the spot. He was damn lucky that it‘d been Gavin who’d come after him when he’d been hired to build the bondage equipment for the new BDSM club, Kiss of Leather. Fate must’ve intervened by the mere fact that it was Gavin, and not one of his other partners—Derek or Josh—who’d been designated to meet with Kyle about the job.

“Huh?” He furrowed his brow. They’d definitely been talking about something important—he was sure of it. “Oh! Right. Thank you, I’m wonderful.”

An attack of giddiness crept up on him and he was reminded of how Gavin had warned him that his emotions would be erratic in the beginning of his journey into complete submission. He preferred the random laughter to the embarrassment of the crying jags. But the whole experience had helped him to discover that he held deeper emotions than he would’ve thought possible even a year earlier. Gavin had revealed to Kyle just how much he had to offer as a partner, friend and lover, and kept reminding him every day of their lives together that Kyle was so special to him.

“I love you, boy.” The corners of Gavin’s mouth curled into a smile. “Don’t ever doubt that.”

As had been typical in the few months they’d been together, Kyle’s giddiness transformed into a lump in his throat that had him swallowing down the threat of tears.

“Same here, Master. I love you—” He almost choked, but regained control. “So much. So very much.”

“Hmm.” Gavin seemed to search his face for some mysterious answer. “You know better than to hide from me.”

He kissed around the edges of Kyle’s mouth, soft warm touches that had Kyle’s piss boner turning into the real deal.

Gavin had pinched his ass.

“I see you holding back your emotions from me. If we were at your workshop or picking up the dry cleaning, it would be appropriate. But here? In my arms? Both of us naked and alone? This is your sanctuary, boy. Don’t you dare hide from me.”

Gavin had a good point, as usual. Kyle was no idiot, but he’d spent so much of his life closed off and willing to accept whatever scraps of love or care that might’ve been thrown his way that he hadn’t known what to do with the explosion of attention and consideration Gavin had blessed him with from almost the moment they’d met.

Gavin nuzzled his temple, placing tiny kisses along the side of his face. His Master knew exactly how to reduce him to a pile of goo.

Gavin captured his lips with a firm closed-mouth kiss, then released Kyle before yanking him up from the bed. Kyle stumbled in the tangle of sheets and blankets, Gavin helping to extricate him.

“Let’s get rinsed off and ready for each other. I want to make love to you all morning. Then we can pack for a little trip.”

Kyle allowed himself to be led to the large en suite master bath of Gavin’s elegant home.

My home too, for real now.

The realization that Gavin had promised him a permanent contract seeped in. His cheeks heated from the excitement of it all. It had taken him until he’d hit his early thirties to find someone who made Kyle believe that he mattered. Gavin was that man. But then another part of Gavin’s statement jumped into his mind as he reached the doorway of the bathroom.

Gavin chuckled as he dropped Kyle’s hand, waiting for Kyle to perform his morning task of readying the shower.

“Yes, Kyle. We need a few days to focus only on us after what we shared together last night. I want you at your best and it’s important that we don’t leave anything un-addressed after such a draining session.”

“But…” Kyle pressed his lips together to keep from blurting out anything else that could be interpreted as arguing with or questioning his Master’s ability to take care of him.

Gavin considered him. “Ask me anything you wish, Kyle. For the next few days, I want every thought—even the tiniest of concerns you have—given to me to carry. In light of what we revealed to each other, if you have questions about our future together, you need to present them to me.”

“Okay.” Kyle cleared his throat, his ever present flushing in full force as he prepared himself to challenge Gavin’s plan of taking them away on a trip. “It’s just that the club is due to open in three months, and there’s so much work to do and…”

As soon as he’d begun his reasoning out loud, he realized that Gavin of all people knew how much work there was to do—it was his damn club. Kyle was only designing and building the dungeon furniture. Yet, Gavin was still willing to put it all aside for a few days in favor of making sure that Kyle was okay.

You do have to read these books in order. I quickly figured out what Morticia was doing here. She’s writing a series where every character, as she writes them, will be vitally important the overa...

Share what you thought about Safe Limits and earn reward points.