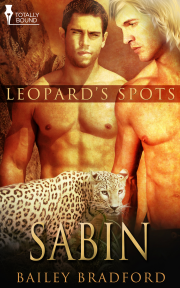 Book 11 in the Leopard's Spots series

Sabin just wants his powdered sugar donuts, until he meets a man that tastes better than any sweets Sabin’s ever tried…

Sabin has watched his brother fall for a man, a human who was Nischal’s mate. Sabin just wants his damned junk food, but no. A weird shifter named Cliff had to mention Sabin in a creepy text and now Sabin can’t have a moment’s peace.

Until he goes to town with Nisch and Preston, and meets his mate. Hey, no one can tell Sabin he can’t be with his mate! Except his mate doesn’t know anything about shifters, much less that he is one, and together Sabin and Emmett are thrown into a life or death race to discover a plot that threatens all of humanity… At least, the human part of it.

Normally, pity parties weren’t Sabin’s thing. Even when he’d been held captive for almost two years, unable to shift back from his snow leopard form, starved, neglected, abused. He’d been down during that time, certainly, but he hadn’t lain around wondering, ‘Why me?’ But tonight, he was definitely running the risk of that moronic type of brooding.

Now he was free, able to shift as he pleased—which wasn’t often, thank you very much, because shifting was quite a bit more painful than it used to be. All Sabin could figure was that so many months being drugged and unable to shift had done something to him. It shouldn’t have. He’d run as a leopard for most of his childhood years and never changed forms, but that had been his choice.

Which meant his current shifting pains might be psychological, and that was more trouble than he wanted to think about. Especially when he was feeling like he had a target between his eyeballs, and all because of some weird stranger’s text. For almost a week now, it had haunted him.

One left. Will need help with this one, I think. Tell Sabin to be careful. It won’t kill him. Remus, we’ll meet, one day.

The message hadn’t even been sent to him directly. It’d been sent to Justice, who was the mate of Paul. Paul in turn was Preston’s twin brother, and Preston was mated to Sabin’s brother, Nischal. The man who’d sent it, Cliff, was just out-and-out weird. Powerful, too, and he’d been so nice to Sabin when they’d met at the rest area a while back.

“It’s a big loop of crazy,” Sabin muttered to himself as he took in the hundreds of stars lighting up the night sky. Their brightness made what dark there was around them seem endlessly black.

Sabin put his hands to the window glass. It was cool against his palms. The moon shone high—a ‘goddess’ hangnail,’ his mother had called it when so little was on display.

The silvery-white beams of light caressed the tops of the tree branches in the forest and cast pale streams on parts of the ground. Outside, there were shifters patrolling the grounds, protecting him and everyone else inside the cabins.

There was still one psycho shifter on the loose. One twisted wolf who’d delighted in making humans his slaves and hurting them. And for some unfathomable reason, Sabin was supposed to have a place in catching that guy? Or was the ‘need help’ part about someone else?

The questions were endless, and had been ever since Sabin had been told about the text. Six days of him wondering, worrying, stressing— Damn, but he was tired of letting it get to him.

What was he in danger of here, on his family’s property? As it turned out, ‘Grandma’ Marybeth was his mother’s cousin. She liked the Grandma part, but Sabin was having some trouble getting used to it. Every time he called her Marybeth or Miss Marybeth, he got thumped on the nose. The tip even had a slight pink tint to it from an earlier thump.

Sabin left the window for the comfort of his hidden pack of powdered sugar donuts. He was lucky Nischal hadn’t sniffed them out. Ever since Sabin had gotten a little wound up at a rest area after eating his first junk food, Nischal had been a fun-killer by restricting Sabin’s access to most of his favorite unhealthy snacks.

At least he had a couple of hidden stashes, thanks to Oscar. The snow leopard shifter was his cousin, somewhere down the line, and he’d become an ally when it came to circumventing Nischal’s bossiness. Of course, Oscar could be bossy too…

The instant the sugary treat hit his tongue, Sabin began to feel better. If not better, then at least distracted. He thought that if everyone in the world would take a break to eat powdered donuts, maybe there wouldn’t be so much fighting and killing.

Then again, if they all got hyped up on the sugar, it could be disastrous once they’d eaten the sweets.

Sabin wolfed his down then stretched, arching his back and popping the vertebrae down his spine. He wanted to shift and run, but the freedom he yearned for wasn’t fully his yet. He couldn’t lose himself in the mountains like he wanted to. There were family and friends to consider now.

Wandering back over to the window, Sabin thought about how nice it would be to run under the sliver of moon. The earth would feel cool and moist beneath his paws, the pungent scent of it stirring with each step he took. There would be a breeze, too. He could tell by looking at the trees. Their branches swayed gently but steadily.

Sabin was so entranced watching the leaves flap and fall that he was completely unaware of anything else. It was almost like magic, the way the leaves floated slowly to the ground. Or maybe it was more like someone had set Mother Nature into slow motion, Sabin mused.

Then he screeched and flailed backwards as a screaming face popped up on the other side of the window.

“Fuck!” Sabin pinwheeled his arms, but his feet somehow tangled one another up and down he went. At the moment his butt made contact with the hardwood floor, the identity of the screamer registered in his brain. “Nischal, you asshole!”

Sabin scrambled up and took off running for the front door. He should have noticed Nischal outside. Sabin had known his brother was out there. Everyone was doing patrols on the property because the consensus was Cliff was crazy and they were in danger from him and the one sadistic wolf shifter still on the loose.

Loved this book. A lot of intense scenes, drama, and romance. Great story.

I found that the scenes are well written, easily pictured and believable.  The story has an interesting and serious conflict as well as sizzling sex scenes and romance with just the right amount of...

Share what you thought about Sabin PRINT and earn reward points.