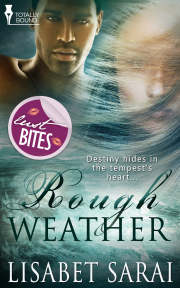 Destiny hides in the tempest’s heart…

Ondine has always felt at home in the sea. Orphaned at birth and raised by her grandmother on the island of Martha’s Vineyard, she has never really questioned her extraordinary affinity for the watery world. She concentrates on her work as a marine biologist, spends her weekends relaxing among the waves and worries about human threats to her beloved ocean environment. Fears of a deadly pregnancy like her mother’s make her cautious about sex.

When she encounters an attractive but arrogant engineer on her private beach, surveying the site for a prospective off-shore wind farm, anger is her first reaction. A casual touch, however, transforms that emotion to incomprehensible, irresistible, terrifying lust.

Ebony-skinned Marut has his own talents—aside from his uncanny ability to swamp Ondine with desire. He can control the winds and summon storms. He informs Ondine that they share a supernatural heritage and claims she is his destined mate. She responds with scepticism and tries to resist the charismatic Haitian, but ultimately her scientist’s training won’t permit her to deny the evidence of her senses—and her heart. As a brutal northeaster batters the island and Marut’s life hangs in the balance, Ondine learns that true power lies in surrender to her elemental nature.

Only the sea could soothe her.

Abandoning her shorts and sweatshirt on the damp sand, Ondine splashed into the surf. Chill water climbed her bare thighs as she waded deeper, sending delicious prickles racing across her skin. The Atlantic was always frigid, even after three months baking in the summer sun, but Ondine experienced the icy swells as pure pleasure. She dived under a wave and savoured the exquisite shock of total immersion.

Her body came alive with fluid energy. A powerful kick propelled her toward the bottom, where she cruised with practised ease, eyes open to the greenish translucency around her. Kelp fronds fluttered with the current, tethered to the rocks below. Fish darted like silver lightning among the rippling blades of sea grass. A cobalt-blue crab inched its way along a ledge, pincers held high like a dancer with castanets. The distant, haunting call of a whale reached her sensitive ears, vibrations transmitting faint but clear though the miles of ocean that separated her from the creature. A mating cry, she thought, smiling to herself, alert for the reply which came a minute later, the female even farther away but definitely receptive.

The cycles of nature continue, despite our assaults. Calmed as always by the rich life that thrived beneath the waves, she surfaced and rolled onto her back with her arms spread wide. The sea supported her, rocking her in a gentle and familiar embrace. The currents tugged at her long hair until it fanned out around her head like a platinum halo.

The anxieties that dogged her on land evaporated. Eyes closed, she synchronised her breath with the muted roar of the breakers upon the beach. The water bathing her limbs felt blood-warm now—though intellectually she knew its temperature was in the single digits—and viscous as honey. Morning sunlight dried her exposed breasts and belly, leaving a sweet sting of salt. Her thoughts drifted along with her body, to the cetacean couple, then to her dream—the one that had wrenched her from her slumbers, sweat-drenched and hungry, and driven her down to the shore to seek some peace.

She had been swimming in the dream, far from land, slicing through the sea with the speed of a shark, the grace of a dolphin, acutely aware of the burgeoning life around her, glorying in her freedom. The space below the surface had glowed like the interior of an emerald, lit by the sun above. Arousal hummed through her, wellbeing shading into something like need, but not urgent, not yet—merely a side effect of her finely tuned perception. She would let the ache build, gathering force and volume, until the flood of release was as inevitable as the tide.

Shadows had gathered overhead. The pellucid depths turned grey. Choppy swells churned above. Then with terrifying suddenness she’d been hooked—arrested in her liquid trajectory, dragged up into the air, sputtering and thrashing like the fish she sometimes resembled.

She had found herself suspended in lightning-shot blackness, hung by some pivot between her shoulder blades. Fierce winds swung her back and forth, whipping her hair into her face. Anger and terror warred in her chest.

“Release me!” she’d cried. The gale had ripped the words from her and flung them into the skies. “Let me go, whoever you…”

Share what you thought about Rough Weather and earn reward points.