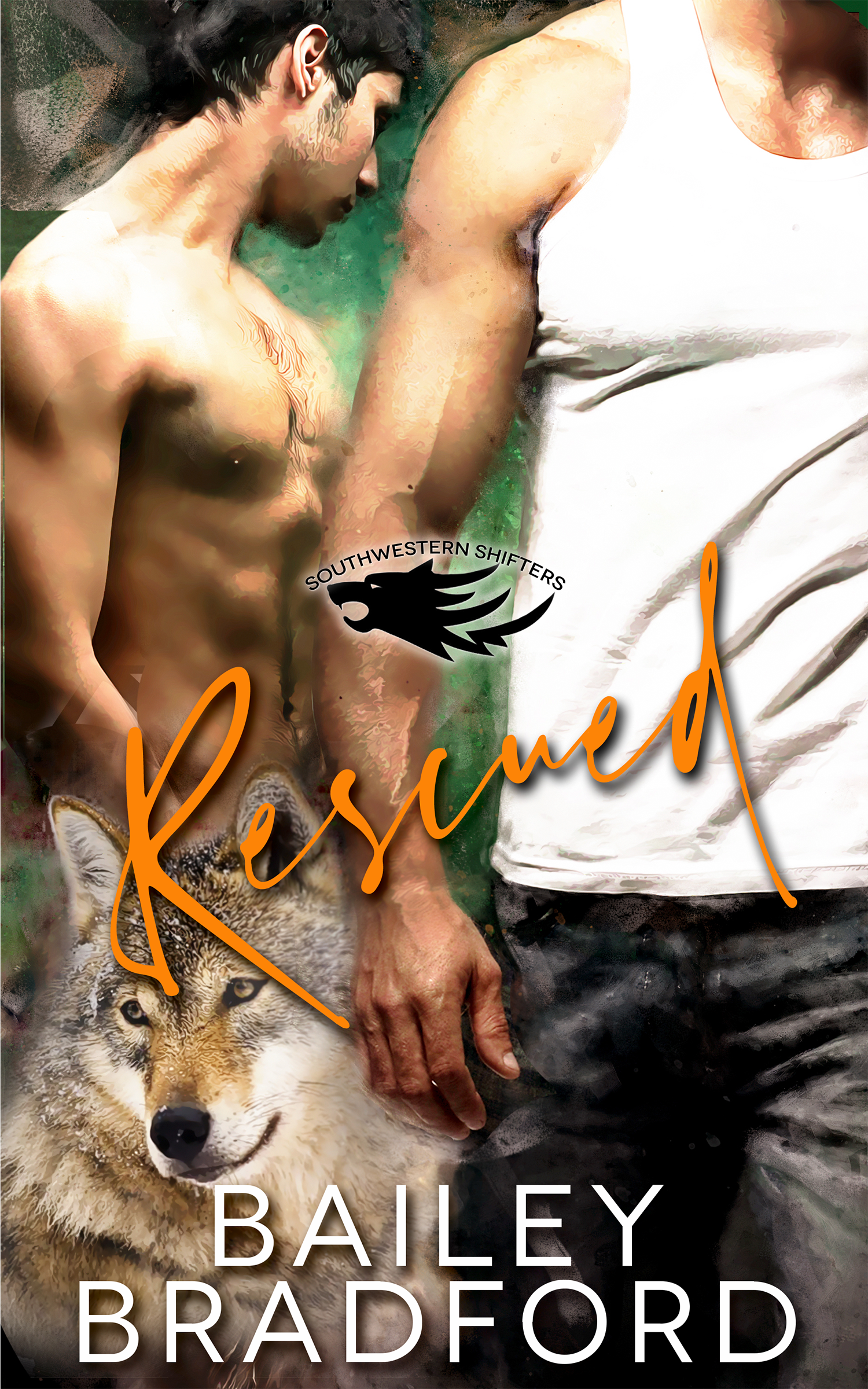 Book 1 in the Southwestern Shifters series

When Gabriel Staley rescues a magnificent black wolf, he has no idea that destiny has just turned up the heat and brought him his mate, sexy shapeshifter Mika Blackwell.

Gabriel Staley was used to being an outcast in the small town of Shasta, Texas. More concerned with rescuing stray dogs from a cruel death at the hands of the local Sheriff, Gabe focuses on making a difference and standing up for what he believes is right. Mika Blackwell, a shape shifter who was banned from his pack, is new to the outcast status, and not adjusting very well.

When Gabe heads out to rescue an injured wolf, he has no idea that his life is about to be eternally altered. As Mika watches the man approach him, he feels the universe tilt and realises that, while he may have lost his pack, he's just found what every shifter longs for—his destined mate.

Together, Gabriel and Mika must find their way and fight for their love—from confronting Mika's former pack leader to stopping someone who tries to kill Gabe's best friend, Todd. When Todd's attacker comes after Gabe, Mika is determined to protect his mate at all costs.

Gabriel Staley finished feeding the last dog in the kennels, rubbing his fingers through the blue heeler’s coarse fur before standing and closing the gate. He’d needed to spend extra time playing with Jojo and working on obedience with him. Jojo had been abused at some point, as had most of the dogs at Gabriel’s animal shelter. It amazed him how cruel people could be, not only to dogs, but also to any animal. It was a real problem, particularly out here where he lived, in this little podunk town of Shasta.

To be fair, he didn’t actually live in town; he lived on a few acres on the outskirts, in what he considered a decent house, nice but by no means fancy. Gabriel had inherited the place when his grandparents had passed away in a car wreck. He had already been living with them for several months, ever since he’d come out to his parents. Finding out that their only son was gay was more than his evangelical-loving parents had been willing to tolerate. There was no understanding or unconditional love in them, and Gabriel had accepted the demise of their relationship. His grandparents had welcomed him into their home, and their love and acceptance had been a soothing balm to his injured heart.

Yes, his grandparents had loved and accepted him, and they’d also made sure he knew that the God his parents had used against him was not the God they believed in. After being disowned and labelled an abomination, Gabriel had been on shaky ground emotionally. His grandparents had taken him in and shown him what love was supposed to be, in the way they treated him, and the way they treated one another. Their love for each other had been stronger the day they died than when they first met, and though it hurt Gabriel horribly, he always felt it was best that they’d died together. He knew it would have been what they wanted.

Arching his back to work out the muscles that were stiff from bending and lifting, Gabriel glanced at the semi-enclosed kennels he’d built himself, making sure all the gates on them were shut properly. He had converted an old barn for this purpose, dividing it into two rows of six chain link pens each. Not wanting the dogs to be confined for hours at a time, he‘d installed doggie doors in the back of each kennel and had put up chain link fencing that ran ten feet out behind each shelter, giving the dogs at least a little room. It wasn’t perfect at all, but it was a lot better than what waited for them out on their own.

As Gabe had found out, courtesy of his friend Todd Benson, a deputy for the Sheriff’s department, the stray dogs in Shasta were usually killed in whatever cruel manner Sheriff Kaufman felt like using. No one other than Gabe, Todd, and the local veterinarian Dr. Adam Soames seemed to care; it was just the way things had always been done in Shasta. The three men worked together to try to change that, one rescue at a time.

Gabriel headed towards his house, thinking how much he would enjoy a long, hot bath when his cell phone rang. Pulling the phone from his jeans pocket, he glanced down and sighed. He tapped the screen and brought the phone up to his ear.

“Hello, Todd. What’s going on?” Gabe knew since the deputy was on shift, he must be calling about a rescue.

A wolf? What the hell? While wolves weren’t unheard of in New Mexico, thanks to the transfer of wolves to the Gila National Forest, Gabe hadn’t heard of any of them working their way down into northern Texas.

“How bad is he hurt? Where do I need to meet you?” Gabe had more questions he wanted to ask, but those were the most important ones, so he would start there.

“Well, I got a call in from Mrs. Schumaker saying she thought she saw a big dog out by her barn. She was worried it might be rabid or something. Anyways, I got out here and damned if there isn’t this huge black wolf out behind the barn. Except he’s just lying here, and he looks like he’s been starved or he’s sick, I don’t know. I called Adam and he’s on his way right now. Can you head right over?”

Adam had become involved in the rescues when Gabriel had gone to the man for help with some of the strays he took in. After a few visits to the vet clinic with different dogs, Adam had finally asked Gabe what was going on. Once he’d learned what Todd and Gabe were doing and why, he volunteered to help as much as he could, giving free medicines and other needed services, including spaying and neutering. While Gabe didn’t really know him in a personal manner, he did know him very well in a professional manner and had a great deal of respect for the man.

After he assured Todd he would be there as soon as possible, Gabe tossed some towels into his truck, along with a blanket and a digital camera. He considered bringing what medical supplies he had at the house, but since Adam was going to be there, Gabriel didn’t see the need for his own meagre supplies.

Great new start of a series. In all honesty, Gabe and Mika are my two fave characters. Gabe is....Gabe and Mike is so in love with his mate, he will do anything for Gabe.

Great book. Looking forward to more from this series.

Share what you thought about Rescued and earn reward points.