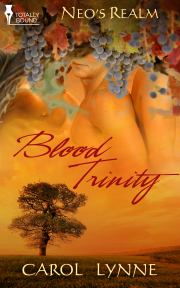 Book 2 in the Neo's Realm series

For over four hundred years, werewolf mates, Kern and Haig fought and loved side by side. Although they've had a few rocky moments along the way, their love for each other has never wavered. That is, until Kern is kidnapped and forced to mate with the outsider, Audric. Hurt and confused, Haig runs from Neo's Realm and, most especially, Kern. How is Haig supposed to accept another man in his marriage, especially when that man isn't a werewolf at all but a vampire?

Centuries spent as the whipping boy to the other vampires in his coven have left Audric hungry for affection. His goal isn't to come between the mated pair of werewolves, but to become part of their family. Unfortunately, his yearning for love and companionship soon threatens to damage that which he desired.

Kern hates that his unwilling actions have hurt the only person he's ever loved, but with Haig gone, he's left alone to introduce Audric to a new life on the vineyard. Kern didn't expect to like the puny vampire, but Audric begins to ease his way under Kern's skin. When Haig returns after a two month absence, Kern is afraid his newfound love for Audric might tear apart his marriage with Haig.

Three men, two species, one bed. Is it possible to put aside jealousies and establish a new kind of family or will this forced union destroy everything?

A noise woke Kern from a restful sleep. He instinctively reached over to Haig’s side of the bed but met with only the cold sheet. Kern balled his hand into a fist and slammed it against the empty spot where his mate should be. How long would Haig continue to punish him for mating with a vampire?

Kern didn’t even remember fucking and biting Audric. He’d been under the sadistic control of Richard, the last of Francois LaMont’s chosen minions, at the time. No, that wasn’t true. Audric was the last of the coven. It was a fact Kern had reminded himself of several times over the previous hours.

When he’d woken in the steel-lined underground chamber with a nude, and recently mated, Audric at his side, Kern hadn’t understood. Neo, his boss, had been the one to inform him of what had happened. Kern’s immediate response was to ask for Haig. It had also been Neo’s job to tell Kern Haig had been unable to handle the knowledge that Kern had mated with another.

Kern’s first inclination had been to get angry with Audric. He’d jumped to his feet and started yelling at the small vampire. The only thing that had calmed him was Audric’s reaction. Instead of defending himself, Audric had rolled himself into a ball, obviously awaiting the first blow. Suddenly Kern yearned to soothe the small, red-haired man with haunted green eyes.

Hours later, Kern’s heart had still been torn in two directions. The circumstances behind the mating had bound him to Audric. Although love hadn’t come instantly, Kern’s protective instincts had started to grow the moment he’d bitten the scared vampire.

Even now as he lay alone in a bed he’d shared with Haig for over four hundred years, he longed to check on Audric.

A noise outside his bedroom got Kern’s attention. He jumped up and crossed the room, hoping Haig had finally come home. Nude, he walked into the living room. The sun was coming up and the room was bathed in a soft pink glow. Unfortunately, that seemed to be all that was in the room—no Haig.

The noise sounded again, and Kern finally realised it was coming from the guestroom. Audric. Kern raced to the bedroom, prepared to risk his life to defend the vampire. When he opened the door, Kern was surprised to find the room empty and the bed still made. He glanced at the windows and realised Audric hadn’t even drawn the curtains.

Closing his eyes, Kern tried to zero in on the smell of his new mate. He knew it would take some time to acclimate his body to the addition of Audric into his life, but within days Audric’s scent would forever be imprinted on Kern’s wolf.

Kern’s gaze went to the closet. What the hell? He closed the curtains before opening the closet door. Although Audric was only around five-foot four, sleeping on the floor of the closet couldn’t be comfortable. He bent down and ruffled Audric’s tousled red curls. “Audric?”

Audric’s eyes sprang open. The look of fear in their green depths was something Kern would never forget.

When Audric seemed to relax a bit, Kern sat on the floor. “What’re you doing in here?”

Audric’s head tilted a fraction to the side. “Sleeping?”

“Why in the closet? The blinds’ll keep the sun out if that’s what you’re worried about.”

Audric’s eyebrows drew together. “I’m used to sleeping in the closet. It’s where I’ve always slept.”

The admission angered Kern more than he could understand. “They wouldn’t even give you a bed to sleep in?”

Audric shook his head and scooted further into the closet. “I had a bed, but it was always safer for me in the closet.”

Kern stood and held out his hand. “I won’t let anyone hurt you. Come.”

Ms. Lynne has continued her new series with this incredible book...I, for one, can't wait for the next book in the Neo's Realm series.

When it comes to the men's intimate relationship, they sizzle. I loved watching them interact...With the third installment coming out soon, and the possibility of new characters being introduced...

Share what you thought about Blood Trinity and earn reward points.