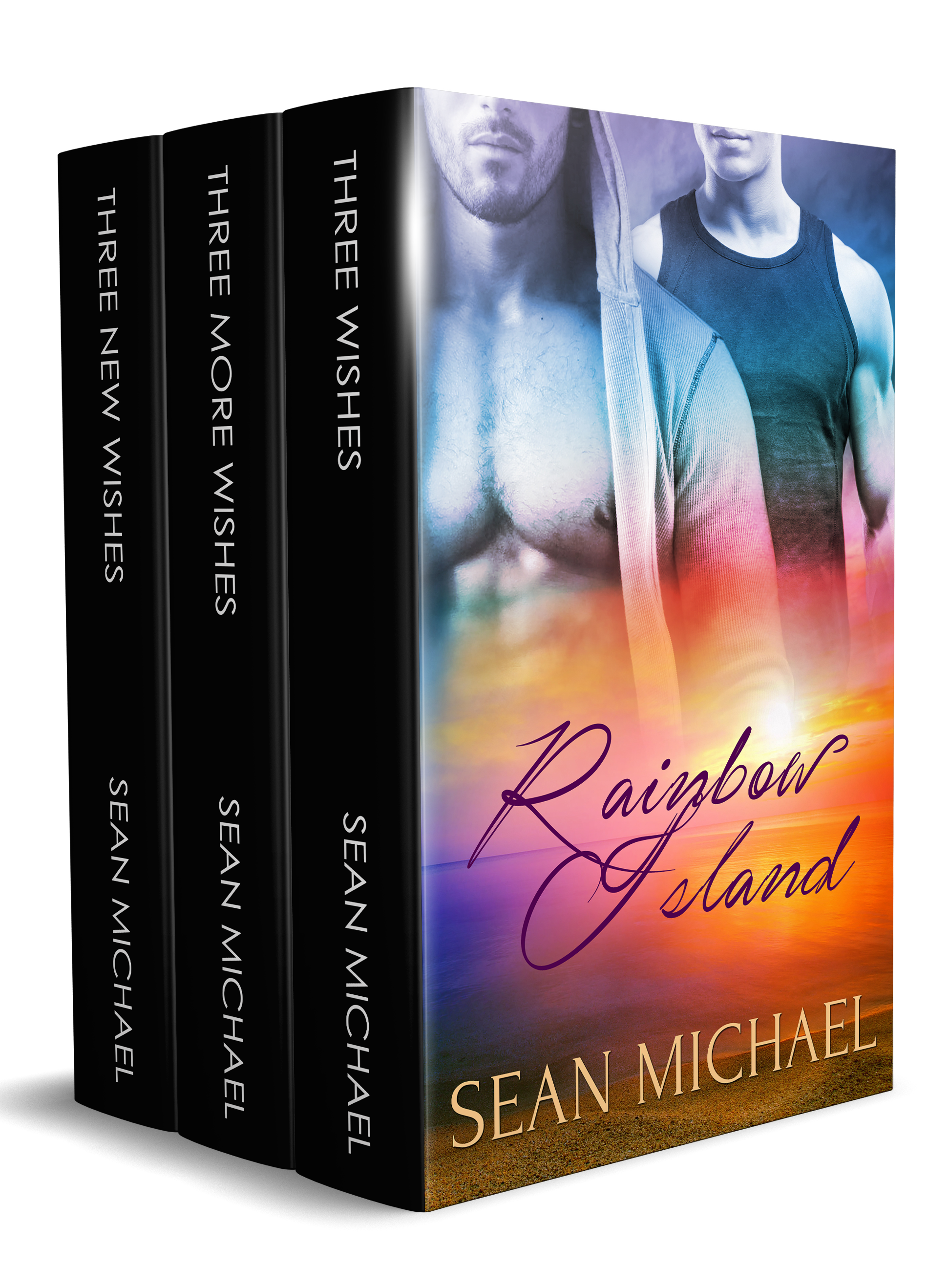 In Three Wishes, James, Guard and Damien bring in three different couples for their special fantasy-granting services. Handsome model Benji is tired of being perfect, and he wants to make his body his own. Thor, tattoo artist and piercer, as well as Dom, is just the man to do it. Will Benji find what he’s looking for?

Meanwhile, Alan and Roman are a long-time sub/Dom couple looking to have a few outside Masters give Alan all the things that Roman can’t. Will their relationship survive Alan’s strong reaction to one of the Masters?

The last couple to visit the island are Quinn and Pierce. Quinn has medical fetishes he’s embarrassed to tell his lover Pierce about even though Pierce is a doctor. So he’s going to get it out of his system in this safe environment. At least that’s the plan…

Don’t miss out on these fantasies come true.

Cameron is losing his sight, and he knows that he’ll be useless once it goes completely. He’s cashed in everything to leave his life behind for one last fling. Xander is on the island for a fantasy, too. He’s looking for someone to love on, someone to care for and Cameron seems to be the perfect match, but can they make it work?

As a writer, Ben always writes the script, which is why his fantasy is to give up control. He’s told his fantasy can’t be fulfilled, so he settles in for a relaxing vacation on an island paradise instead. Is he really as safe as he thinks he is?

Finally, Leo is a consummate top, always wanting to better his technique. He wants to know what it’s like to be a sub, but it won’t be easy for a Dominant to bottom for five days. Leo will do his dead-level best to measure up—his only worry is who the boys choose to be his fantasy top…

Don’t miss out on these fantasies come true.

James, Guard and Damien continue to grant the sexual fantasies of their clients, but so far have been unable to make Rainbow Island work for their own relationship. Damien misses being home more often with his lovers and Guard has been working on breaking down James’ defenses. Can they make their own fantasies come true?

As always, three different fantasies are granted through Rainbow Island.

Tim is rich and bored. A ‘sometimes sub’, he’s searching for something more. Full-time Dom, Rain, is brought in to give Tim the twenty-four-seven experience he’s been looking for, but Rain has a secret—he’s been watching Tim in the club for years, just waiting for Tim to get serious before making his move. Can these two men find what they need in each other?

Mike has been hired to be a submissive. He doesn’t know that much about the lifestyle. He figures he can handle it—besides, the payday is too good to give up. Dom Brendan is handsome and confident, and the things he shows Mike speak to something deep inside him. Could he have found something more than just another job in Brendan?

Angus and Robbie are a committed Dom/sub pair who want to spice things up a little and see if puppy play is for them. They’re excited and nervous to learn from Sam, the puppy master that Rainbow Island has brought in to show them the ropes. They discover there’s more to puppy play than they’d imagined and not all of it is for them. Can they separate what they need from what they want and come out stronger than ever in the end?

Reader Advisory: These books contain fisting,scenes of puppy play and the use of urethral sounds. There are scenes of kidnap and dubious consent, an enema adminstration and a scene including intimate medical examinations. There are also scenes of knifeplay and body modification and a reference to breathplay.

Publisher's Note: Three Wishes and Three More Wishes were previously been released elsewhere. They have been revised and re-edited for re-release with Pride Publishing.

Guard changed into a lilac shirt with huge green and yellow flowers on it. He had matching shorts, but they were probably a bit much. Instead, he put on his bright yellow board shorts and his flip-flops.

Grabbing his clipboard with maps, room service menus, keys and stuff attached, he walked down to the water, where the deck ran out into the ocean. Aldo would be here any minute with their medical fetish client. What was his name?

Guard checked his clipboard—it would be better not to call the guy Med Fetish to his face. Names were a good thing and made the clients feel comfortable.

What kind of name was that?

He’d bet the man’s mother was a hippie. Or at least had been when Sage was born. He would keep that tidbit to himself, too.

The radio on his belt went off and he picked it up. “Guard.”

He clipped the radio back on his belt and waved to Carmen’s nephew Luis. The kid came trotting over with the wagon for luggage, and they made their way down to the end of the dock together.

“Sí.” Luis nodded, smiled at him. The kid wouldn’t remember for ten minutes, but it didn’t matter. After tonight, no one would see Sage Williams until it was time to fly back to LA.

He heard the motor of the plane and shaded his eyes. There it was. Cool. He was ready to get everyone tucked in and go see J. Maybe tonight was the night. He laughed a little to himself. Right. He had faith, though. He had talked to Damien back at the beginning of this nightmare, and they weren’t fucking letting James just fade off. Not now. Not tomorrow.

The plane eased down, landing in the water with surprisingly little splash before heading to the dock. Guard watched as it came in and waved when he could see their client through the little window.

As soon as the plane stopped next to the dock, Luis grabbed the rope Aldo had thrown, and Guard moved up to open the door for their guest. “Good evening, Mr. Williams. Welcome to the island.”

“Thank you.” Sage was lovely, muscled and tanned, bright blue eyes picking up the colors of the sea.

“I’m Guard, and if there’s anything I can do for you while you’re with us, you just need to hit the pound sign, then three on your phone to get me. Zero gets you the concierge on duty, though, and he can probably help you with most of your needs.” He could see Luis had the luggage ready to go. “If you’ll come with me, please.”

“Of course. I… I was told that everything would be arranged for tomorrow.”

“Yeah, everything’s ready for you. And the kitchen is at your disposal this evening—they’d be happy to prepare whatever you’d like.” He led the man to the little golf cart Luis was loading the luggage into.

Guard would bet the farm that Sage was more than a little nervous.

“Everything’s set up to run as smoothly as possible. It’s our job to make sure your fantasy happens just the way you want it. So if there’s anything I can do to make you feel more comfortable…”

“I… I just. I’ve never done anything like this before, you know?”

“It wouldn’t be a fantasy if you had.” Guard had a lot of experience soothing nervous guests. Hell, he knew being nervous enhanced the whole thing for most clients.

“Of course I am.” He gave Sage a wink then turned the golf cart up the long drive to the private bungalow he’d assigned the guy.

“It’s lovely here. Is there a place to swim?”

“You’ve got a pool behind your bungalow.” There was also the entire ocean, but they didn’t have life guards. Besides, most of the guests were looking for privacy, and while there were no outsiders here, there were other guests.

“Excellent. Is it private?”

“Thanks.” Sage looked around, smiled. “I hope I can sleep tonight.”

“I could have a masseuse brought in, or someone to guide you through some meditation.” Unless he missed his guess, though, the nerves and lack of sleep were part of the fantasy.

“I… Can I think about it? I really need to find my headspace.”

“Of course. You can ring the concierge or me if you need anything at all.”

Sage nodded. “Thank you. I know I’m being a nervous Nelly, I just… This is such a big deal for me.”

Guard pulled up in front of the man’s bungalow and clapped a hand on his shoulder. “It’s the chance of a lifetime, and I hope it gives you what you want.” He wanted to be a fly on the wall, actually. It was amazing what made some people tick. Amazing and captivating, even when it otherwise seemed weird.

“I do, too. Thank you.” Sage stood up, smiled back at him. “Will…someone come get me tomorrow?”

“Yes. At seven. He won’t speak, he’ll simply lead you to the place where you’ll…see the doctor.”

“Oh. Okay.” The man pinked, but the tent erected in the loose pants Sage wore was impressive.

Man, it took all kinds. It really did fascinate him, the things people wanted. The things people needed. That thought sent his mind back to James, back to those near black eyes, the pointed chin, the brilliance.

He was smiling as he helped Luis get Sage’s bags into his bungalow. “If you need anything at all…” He handed over the keycard and the information pamphlets.

“He’ll have your file, yes. Should you use your safe word, everything will stop.”

Sage grinned at him. “That’s comforting. Thank you. I’ll call about my dinner decisions.”

Guard made sure his client made it into the cabin, luggage and all, before he left.

He drove the golf cart back to the dock to let Luis off and glanced at his watch. He had about an hour before the next guests came in. Maybe he could go find some flowers to bring with him for dinner.

Share what you thought about Rainbow Island: A Box Set and earn reward points.