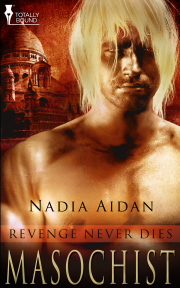 What would you do for revenge? To what lengths would you go? Would you destroy the man you loved or would you let him destroy you?

La Ville des Dieux—The city of the gods. It isn't. It is a city full of evil, demons and devils that prey upon the weak, the vulnerable, the pitiless and the poor. Mortal men who call themselves gods own the city, control the lives of all who live within its vast borders. Yet they aren't gods-just men with the faces of angels and godlike bearings. And they share the weaknesses of all men-their sins, their lusts, their desires…and Selena knows this with a certainty.

Sixteen years ago, the most beautiful of all the gods took her innocence and in doing so, he destroyed her soul. She has never forgiven him, and on the anniversary of that night, she sets out to remind him that some sins can never be forgiven, that some sins can only be atoned for with the sacrifice of blood.

Adonis—The most beautiful of all the gods. He bears the face of an angel, and with a simple touch, a single look, he can inflame the passions of both women and men. Some say his beauty and the desire he ignites with his touch is a gift-others say it is his curse. When he stares into the ravished eyes of his past, he knows this woman who once found pleasure beneath his touch has been equally cursed by it.

Sixteen years ago he destroyed the only woman to love him and ripped apart her soul…in order to save her life.

No matter the sacrifice or the intent, there are some sins that can never be forgiven.

But on the anniversary of that night, both Adonis and Selena will discover that while some sins require payment in blood, sins of the flesh can only be atoned for with the surrender of the body.

One night forever changed their lives, and this one promises to do the same…

The city of the gods.

Selena knew better. It was a city full of demons, devils, evil that preyed upon the weak, the vulnerable, the pitiless and the poor.

Mortal men owned the city, controlling the lives of all who lived within its vast borders. They called themselves gods. They weren’t. They were just men, with the faces of angels, godlike bearings...but they shared the weaknesses of all men—their sins, their lusts, their desires.

Selena pulled her black silk shawl up higher around her face, slipping through the crowd of patrons who’d come to La Maison d’Adonis—the house of Adonis—for the grand opening of the opulent hotel that would bear the owner’s name. It was a place of decadence and finery, the gilded golden luxury of the establishment as perfectly and beautifully made as the man himself.

The proprietor of the western district of La Ville des Dieux—the most beautiful of the four gods...and the cruellest of them all.

She was dressed in a floor-length, black gown, the sequins twinkling beneath the warm glow of the crystal chandeliers. Her dress was subtle, understated, yet flattering as it raised her full breasts and flared at her rounded hips. The expensive attire had cost her two months’ salary, but it was worth it—the expense, the sacrifices would all be worth it, very soon. The dress was necessary. Its opulence gained her entrance—its modesty allowed her to pass through the crowd without notice.

And that was exactly what she wanted—to pass without notice. No one would expect a simple, diminutive beauty who wore the crucifix of His Saviour draped around her neck—the outward symbol of God’s handmaiden...a nun by any other name—to do harm to a single person. But her sole purpose for being there was to do harm and to reclaim that which had been cruelly taken from her sixteen years ago.

Selena left the crowded ballroom and glided beyond the guest bathrooms into the elevator and rode to the forty-second floor. She then got off, silently disarmed the lock and slipped into the stairwell to climb the last three floors to the penthouse level. A guard awaited her as soon as her heeled feet left the dull grey concrete of the stairwell and sank into the plush, burgundy carpet.

"Excuse me, Sister, but I cannot allow you back here. The chambers in this hallway are private."

The guard was young, handsome...beautiful, as all of the god’s men were. He favoured beautiful things and beautiful people to mirror the perfect beauty of his own flawless face. That was why he’d taken her, defiled her—her beauty had reputedly surpassed his. But not anymore. Outwardly, maybe, but deep inside she was ugly, the core of her vile and hideous.

His eyes widened as he clutched his throat and gasped then crumpled at her feet in a heap.

Every movement was muffled, almost silent.

She stepped over the beautiful man and turned the corner. His room, she could easily tell, for another two guards stood before the double oak doors.

Selena smiled as she approached and the two men fell under her spell.

Her smile mimicked the pure luminescence of warm sunshine peeking through the dull grey of winter clouds. Before either could react, she shot them both, also in the neck. The mild neurotonic venom seeping through their blood stream would cause immediate paralysis. Unconsciousness would follow in seconds. They would think they were dying. But all would awaken...long after she was gone.

Only one needed to die this night.

She stepped over the prostrate guards and knocked gently on the door. There was no need for pretence. He knew she would come, for she’d told him. Sixteen years ago he’d taken her innocence and destroyed every dream she’d ever had. And sixteen years ago she’d promised him she would do the same to him someday. When he was at the pinnacle of success, she’d promised, she would destroy him as cruelly and carelessly as he’d once destroyed her. She kept every single one of her promises. She’d warned him then. And with a letter just weeks ago, she’d warned him again.

He bore the face of an angel, and, with a simple touch, a single look, he could inflame the passions of both women and men.

As Adonis stood in the doorway to his suite, staring into the ravished eyes of his past, he knew that this woman who had found pleasure beneath his touch was equally cursed by it.

He stepped aside and let her in.

The cobra entering the lion’s den. She was small...delicate even. To be disarmed by her diminutive stature was to be foolish. She was dangerous, deadly, and she’d come there to kill.

He closed the door behind her with a soft, ominous thud—the locking of the door sealing his fate...and hers. Tonight would forever change their lives, just as that night sixteen years ago—on this very same date—had irreparably altered their destinies.

There was no turning back—no space for redemption, for forgiveness. v"Selena."

She turned at the deep, husky lilt of her name on his lips. His accent was rich and heady, like potent brandy. Her shawl slipped to her shoulders as she lifted her head and met his gaze.

Piercing amber eyes bore into her, seeing through her, inside her, searing her body, marking her very soul. She shuddered despite herself. He knew the effect he had on women, men...her.

Share what you thought about Masochist and earn reward points.

Other books in the Revenge Never Dies seriesView Series Page