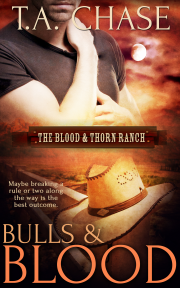 Book 1 in the The Blood & Thorn Ranch series

Breaking the rules has never been Wesley’s way…until he meets Mino.

Rule Number Two that the Thorn brothers live by is that employees of the ranch are off-limits. Wesley has always followed that rule, never stepping out of his comfort zone to do more than talk to one of the cowhands that help run his family’s ranch. Being a vampire makes it easier, since he doesn’t go out during the day.

Mino’s been interested in the youngest Thorn brother since he began working at The Blood & Thorn Ranch. It’s those stupid rules that hold him back from making the first move. Well, those and the fact that Wesley could kill him in a blink of his eye. Being human in a world of supernatural creatures makes living difficult, since he’s considered prey.

These two males, from different species and societies, must find a way to meet in the middle of their worlds if they have a chance at love.

“Wesley?” Day shouted as he barreled into the house. “Where the hell are you?”

Wesley grimaced as he studied the figures on the spreadsheet he was working on. “Where do you think I am, Amadeus?”

Day burst into the office where Wesley spent the majority of his time. Wesley watched as Day almost bounced off the walls, muttering and waving his hands around.

“What seems to be the problem, brother dear?” Wesley leaned back in his desk chair, resting his hands on his stomach.

Day whirled to point at him. “Did you know Loman bought another bull?”

Wesley sighed. “Yes. I did know that because I’m the one who okay’d the purchase. Why are you upset about it?”

“I wanted to build another cabin, so we can bring more visitors here—which will bring in more money.” Day threw his hands in the air. “I can’t do that when Loman’s buying more animals that we don’t do anything with.”

“First of all, did you read the email I sent to everyone last week before he got the bull?” He gave a mental eye roll when Day dropped his gaze to his feet then shuffled them against the hardwood floor. “No, you didn’t, and I’m not surprised. Why do I spend this extra time trying to keep you all in the loop when none of you read what I send you?”

Day glared. “They’re so wordy. If you just put the important stuff at the beginning, I’d read it.”

“You mean the stuff that matters to you,” Wesley commented then motioned for Day to stay quiet. “If you had actually read it, you would’ve seen I’ve budgeted the money for you to build that silly cabin, along with Loman’s bull. We have more than enough to make improvements to the ranch and the herd.”

“Seriously?” Day stared at him. “Why didn’t you tell me earlier?”

“Because, silly me, I thought you might have read the email. Next time, I’ll remember no one does and come see you each separately.” Wesley nodded toward the door. “Now that you know you can build it, get out of here. I’m trying to arrange the schedule for the next couple of hunts we have.”

Day folded his arms over his chest and kept looking at him. Wesley went back to the computer screen, trying not to let Day’s continued presence bother him. Finally, he glanced up and scowled.

“Why the hell are you still here?” Wesley threw the pen he held at Day.

His brother caught it then sent the pen back to him in one quick movement. He batted it out of the way, not caring where it ended up. Amadeus was the third oldest Thorn brother while Wesley was the baby, and having five older brothers was a pain he’d grown used to over the hundreds of years they’d been alive.

He flashed his fangs at Day, annoyed by his presence. “What the fuck are you staring at? It’s not like you need a credit card or a check from me to go buy the supplies.”

“Have you left the house lately?”

Wesley frowned before turning to look out of the window behind him. The sun was high and he could see the cowhands working a herd of cattle in one of the corrals. He could hear the lowing of the animals along with the shouts of the men, even though the barrier of the glass. After taking a deep breath, he wrinkled his nose at the smell of sweat, dust and shit.

“And I’d want to do that for what reason?” He shook his head. “I don’t need to go outside.”

“Maybe to breathe in the fresh air. Interact with people—human or otherwise. All you do is sit in front of your computer and play with numbers to make sure this ranch keeps running.” Day stalked over to him then poked him in the shoulder. “Trust me. This place will keep going, even if you take a break now and then.”

Wesley pushed Day away. “Go bother Loman. I don’t have time for this.”

“I’ll leave, but I’m going to talk to Reginald about this,” he said as he left.

“Don’t bother him, Amadeus. He’s not been in a good mood lately,” Wesley warned before the door shut behind his brother. “He better not go and bother Reginald,” he muttered as he started working on the schedule of shipments coming in for the ranch. Day and Loman were in charge of the different day-to-day operations, but Wesley was the one to make sure the overall business went smoothly.

The Thorn brothers are old, strong and ruthless Vampires. They don’t drink from anything that's alive, they drink blood from a cup. They have rules that they live by and expect all their employees to al...

This is a unique perspective on the vampire world. No sparkly bits. The vampires are described in the book as the apex predators and there is off page violence. The romance progressed in a way that...

Share what you thought about Bulls and Blood and earn reward points.

What can we expect from Bulls and Blood?

You can expect cowboys and vampires. Also some shifters and demons. There’s a little bit of every paranormal creature you can think of mixed in. It’s about having to decide if breaking the rules is worth the trouble.

The Blood & Thorn Ranch universe is populated by all kinds of creatures. At the top of the society are the vampires and once they came out of the shadows, they took over.