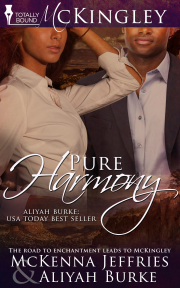 Book 4 in the McKingley series

A single night at an auction can lead to forever.

Jonathon Wright is one of the most sought-after attorneys in and around McKingley, New Mexico. He's cool, calm, and fastidious. Reputed to be one of the more serious of the Wright clan he tends to keep to himself and focusing on his career. None of which matters when one night in a hotel changes everything. He can't get her out of his mind and so when the opportunity arises, he pursues, determined to have her.

Harmony Oshiro is a child prodigy. An accident has since taken her ability to perform as she once had, so she's left the limelight and come to McKingley to teach music at the university, trying to heal her soul. She never knows that here she would run into the man with whom she'd spent one night of bliss.

Despite their differences she really enjoys being with him. An incident puts them in the same quarters and suddenly Jonathon is faced with a woman who is as impulsive and carefree as he is serious. As she teaches him to enjoy life he wants to not only help her find her confidence to perform again but also stay with him forever. Can he convince her that together it will be pure harmony?

Jonathon Wright groaned and shifted against his cool sheets. As he’d been doing every morning for the past two months, he reached across the expanse of his king-sized bed to find...nothing. No warm body waiting for him. No soft silken skin to slide along his as they made long, slow love.

He was alone in bed.

A frustrated grunt left him as he ignored his rock-hard shaft and climbed from the bed. Once in the shower, he braced his hands along the sandstone-hued tiles and allowed icy cold pellets to pound his skin. The temperature encouraged him to hasten through his shower and soon he stood on the thick rug towelling off. It didn’t take much to get dry—being in New Mexico with such low humidity, it seemed the water evaporated from his skin.

Rubbing the towel over his shorn head, he tried to ignore the flashes of memory that insisted on popping up. Get a grip, Jon, he reprimanded himself. After hanging up the towel, he made his way to his bedroom and got dressed. He had a piece of toast for breakfast then walked out of his condominium with a coffee in one hand, his briefcase in the other.

He headed for the college where he’d agreed to give guest lectures for first year law classes. As he drove through McKingley, his racing mind began to slow. He loved it here, had grown up here, and had graduated from the very college he was on his way to. His entire family lived here, and, while sometimes they made his life miserable, for the most part he was thrilled to have them so close.

In fact, he’d worked with a friend of his eldest sister Katiya a few times. Yurandol Blake was an attorney for the local FBI field office and they had occasionally done things that caused their paths to cross in the legal world. She was sharp, lethally so. In fact, she had been the one to ask him to cover the class today. Something had come up on her schedule and she wasn’t able to make it.

He pulled into the parking lot and drove through to find an empty space. Locating one, he whipped in and shut off the engine. He sipped his coffee and watched the students stroll by.

A bit later, he strode across the well-manicured lawn towards the law building. Pushing through the door, he felt he was swept back to when he’d been a student here. Ever serious, he’d been very focused—on his studies, living at home and saving his money. After he’d passed the bar, he’d purchased his condo as a gift to himself.

He nodded at people he went by as he made his way to the auditorium. Entering, he walked down to the front and placed his briefcase on the table nearest the podium. Opening it, he organised his papers. He took another drink to finish his coffee and settled the mug by his case.

Grabbing the back of the chair, he manoeuvred it so he could sit and watch the students continue to stream in. When the clock indicated the time was right for the class to begin, he stepped up to the podium, turned on the microphone and introduced himself before beginning the lecture.

By four in the afternoon, the last of his students had left his final lecture. After piling his things back in his satchel, he snapped it closed and headed for the exit. A storm had rolled in, dampening the ground. He eyed the ominous clouds hovering overhead. As he walked across campus, the rain began again. The sky opened up and fell in a torrential rush.

Muttering a curse, he dashed for the nearest building. Damn it! He noticed the water droplets on his silk suit. He wiped off his briefcase and fought a frown. New Mexico weather was unpredictable at best.

The halls were mostly empty, which made it very easy to hear the haunting melody that poured from a room. His skin prickled and, of their own accord, his feet took him towards the sound. Never had music drawn him with such intensity before.

He paused at the door and stood there, allowing the notes to flow over him. Unable to resist, he proceeded into the large room. The lecture hall was mostly dark, except for the lights upon the stage that illuminated a large gleaming black piano on centre stage. A woman sat there playing. His heart pounded erratically in his chest as he stared at her. His palms grew sweaty and he swallowed repeatedly as he walked closer.

His extremely analytical brain worked out the percentage of likelihood that it could be her. On the other hand, his body already knew. He grew hard and lust coursed through his veins.

She was alone, as far as he could tell, and unaware of his presence. Her long, thick black hair hung down to the middle of her back, clasped at the base of her neck by a simple barrette. She wore a long—sleeved coral shirt that complemented her skin tone. She moved in time with her playing.

Share what you thought about Pure Harmony and earn reward points.

AB: See…there are sooo many things I could say here. *wicked grin* Seriously, I would refer back to the previous question and how you’re working with another, getting their take on how they imagine/picture a scene. It’s a whole new experience.

MJ: The path that is taken in a story changes as we write together. The path one author takes is different than another and using the combined ideas of two is good…