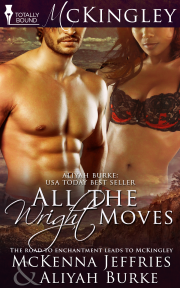 All the Wright Moves

Book 1 in the McKingley series

An attraction that was right from their first meeting.

Savvy software designer Warwick Taylor's multi-billion dollar corporation develops cutting edge computer technology. He had made lots of sacrifices—personal and professional—to get where he is. The loss of his wife many years ago has taught him many tough lessons about life and love. Time was precious and you must take every moment as it comes. During the installation of the computer donation he made to a local community centre, Warwick is swept away by the dedication of the centre's owner. Deciding to take a chance, Warwick opens himself to the possibilities…

After years of hard work, Katiya Wright finally has her community centre, The Oasis, running smoothly. The large donation of computers for her new computer program is a godsend. The man who comes to set them up makes her break her no dating rule. When she finds out who he really is she knows that he is way above what she is used to. Warwick however has other ideas and refuses to be pushed aside. He challenges Katiya to step out of her preconceived notions and give them a chance.

Will they have enough to sustain this unexpected meeting? Can she get past their differences and see him as the man he is… the man that may be the Wright move to make.

Publisher's Note: This book was previously released at another publisher. It has been revised and re-edited for release with Totally Bound.

Share what you thought about All the Wright Moves and earn reward points.