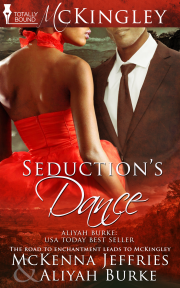 Book 6 in the McKingley series

An unlikely pair come together and realise that their expectations of each other lead to an intense passion that will enhance them both.

Dimitri Wright doesn’t plan to become part of the epidemic of marriage that has befallen his siblings. He knows meeting a woman who is blunt and straightforward and could possibly change his mind is unlikely…at least until the most fascinating woman crosses his path. She is everything he thought he wanted but he realises he is on edge, not knowing what Shannon is thinking or feeling. The contained woman has got under his skin and he doesn’t know what to do about it. She keeps her thoughts to herself and each move seems to be hers but he can’t walk away. He wants Shannon and will use whatever he can to have her.

Shannon Conner values quiet and her time alone and doesn’t want anyone to encroach on her. But Dimitri isn’t like any other man she has met. She doesn’t get emotional or act the way that is considered typical and it usually makes people uncomfortable. Yet Dimitri understands her and makes her feel things she’d never expected. She’s not about to get drawn in by him to be just another woman. Shannon will be herself and if Dimitri wants all that she is then she’ll be willing to take part in a seduction’s dance.

Dimitri Wright rolled the cold bottle between his fingers, his thoughts not fully on what he was doing. He swore he was in the middle of an epidemic of relationships leading to marriage—all his siblings had paired off, one after the other, and their parents were happily planning the weddings. His mother had that gleam in her eye that put dread into every man who was single and enjoyed being so. Dimitri hoped she’d turn her attention to one of the cousins next—the Wright family was large, and they should keep her busy for a while. He was one of those men who liked his life the way it was. He didn’t need a woman to change that—the thought of having to discuss feelings and all the other crap that came with being in a relationship made him want to lock himself in his house until people regained their senses. Hell, even the tentative, trying to figure out if you were even interested in each other was something he hated.

Give him an honest, blunt, straightforward woman and maybe he’d change his mind. The women who approached him were anything but that. They came at him with some excuse trying to capture his eye. But what they didn’t realise was that he enjoyed the chase. The woman he wanted could be blunt, but he was old-fashioned and enjoyed being the one to make the first move. After that he didn’t have a problem with her holding her own with him—he wanted her to. But he wanted to make the initial approach. Then if they discovered they had common interests, it was important for him to know she could share his silences as well as his conversations. He enjoyed those moments of being silent more than anything else. With his profession, he saw some of the most horrible things and just needed time to chill and be.

Dimitri rubbed the back of his neck as his thoughts turned to the fire he’d been sent to investigate earlier. There was no doubt that it was arson. The family in the home had died, all of them including the children—six, four, two and a baby. It was always so damn disheartening when there were kids involved. It was his job to find out who had eradicated the family from the face of the earth. Fire was a nasty business that didn’t differentiate based on race, ethnicity or any other demographic. Once a fire was started, its hunger took all that was in its path. Arsonists lit them for many reasons, but sometimes it was someone who didn’t even think, not knowing that fire isn’t to be played with. These cases were the ones that made his gut burn. He loved his job—investigating fires, tracking down the source, gathering evidence and finding who did it. He didn’t manage the last part all the time, but he damn well tried his best.

He thought of the open case of the serial arsonist he’d been trying to catch for the last few months. It had started with a fire in the science building at the university. There had been no fatalities, but there had been many other fires since then and in some of those, people had died. The fires seemed to be random—there was no pattern—which was making it harder to track him. Lately they had been quiet and there had been no fires with the signature Dimitri had found. Others in the community had assumed and even hoped that maybe the arsonist had stopped, but Dimitri felt in his gut they hadn’t—there was something big coming. There was something about all the cases that bugged him, but he couldn’t put his finger on what. That piece eluding him might be the one to solve the case.

The fire today hadn’t been one of the serial fires. Dimitri lifted the bottle to his lips then drank his beer. He returned it to the top of the bar, rolling his shoulders. He’d been gathering evidence and was tight around his lower neck and back, but he hadn’t felt like going home.

Absently, he glanced around the bar. It was frequented by cops, fire fighters and those like him who did business between the two places. He was actually based out of the firehouse but worked closely with the police force. The good thing was his younger brother Leonardo was the sheriff, and the cops knew him through Leo, making it easier for him to do his job. Not that he wouldn’t go around them if he needed to in order to get his job done. But he’d rather not get in a pissing match, instead preferring to just get what he needed taken care of accomplished.

“It was a tough one,” someone with a soft voice spoke beside him.

Dimitri turned his head then blinked, realising that someone was sitting next to him. He noted the two empty beer bottles in front of the woman, which meant she had been there a bit. Probably had been when he came in, since he was still on his first. He hadn’t even noticed her. Dimitri studied the woman. Her features blended in a face that he would call lovely but in an understated way. Wire-rimmed glasses covered dark brown eyes with thick lashes. Her hair was away from her face in a neat braid, the tail end resting over her shoulder. He glanced at her hand, noting she was rolling a bottle between her rich, caramel-coloured hands as he had been. Her nails were short, neatly clipped, with their natural hue. Dimitri lifted his gaze to study her closer since he thought he recognised her. He tried to place where he knew her from. Suddenly it dawned on him.

“Deputy Conner. You were the cop at the fire with me.”

The Sheriff’s department had left a different cop there since they’d wanted to keep the area protected. The officer with him had been silent and efficient, and he had soon forgotten she was there. She hadn’t tried to ask questions or engage him in conversation, for which he had been appreciative. Fire with kids hit him harder than most.

That was it, no other explanation. Intrigued, Dimitri watched the woman who he hadn’t realised was by him. He remembered what she had said.

She nodded and drank her beer. They fell into a comfortable silence. Dimitri noted a booth becoming available and slid off the bar stool, carrying his beer.

“Let’s get the booth before someone takes it.”

The woman blinked behind her wire frames but rose as he bid and followed him with her beer to the booth. Dimitri slid into it just in time. He lifted a shoulder at the fire fighter he worked with. The man inclined his head and went to the bar. Dimitri focused on the woman. She was sipping her beer and glancing around the packed bar. She finally put her gaze on him, her eyebrow rising as if asking what he was looking at. Dimitri lifted his bottle, using it to cover his smile—Deputy Conner seemed a little prickly. A waitress came over and Dimitri ordered some food. Conner ordered too then the waitress left.

Share what you thought about Seduction's Dance and earn reward points.