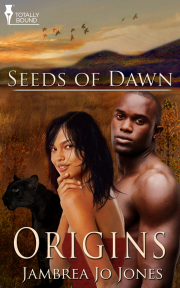 Book 4 in the Seeds of Dawn series

Going home could be deadly.

Centuries have passed. While family has come and gone, cat shifter Zareb has stayed strong to fight against an evil that keeps coming back. It's his duty as a guardian and he never lets the Ancients down. Not even when he has to go against his fellow guardian. It is a risk he was willing to take - until he meets the woman who could change his world.

Joy Rockwell is pissed at the universe. Or is she? The pull from the Vessel is strong. It drags her down and brings out her mean side. Although she's journeying to Africa with virtual strangers, she knows in her heart that this is where she is meant to be.

Two strong individuals must fight their way through the jungles of Africa to put an end to the hold the Vessel has over the shifters before it's too late. Will they fall in love along the way? Or will they be torn apart by circumstances beyond their control?

“Dji. This is our last night before we have to be responsible for everyone. I want to go for a walk. What could happen?” Zareb shrugged.

“I am not sure this is for the best, Zareb. We should sleep. Prepare for the ritual. I want to be fresh and alert.” Djimon looked around at the sleeping villagers, his face peaceful in the moonlight.

“We will be I promise. I want to show you something, that is all. Let us go. Please.” Zareb all but begged.

“As you wish, Zareb. Lead the way.” Djimon waved his hand for Zareb to start walking.

Zareb took his friend down the path he had found a fortnight ago where he’d found something buried just beneath the ground that sparkled and called to him. He’d been called away before he could explore it and Zareb wanted to see what it was and share it with his friend. The two of them would have to turn away from childish adventures soon and stand as protectors, but one more night exploring the jungle would not hurt anyone.

“Here it is. Remember when I told you I tripped over something? But we were too busy to come back to the spot? You have to see this. I bet it will shine in the moonlight. There. Can you see it? Can you hear it? It sings to me.” Zareb pointed to the ground.

It did not appear as if anyone had been to the spot as the ground looked undisturbed.

The two knelt in the dirt and dug. It didn’t take long for the object to pull free. It did shine. Even through the dirt, something called to Zareb, told him to unfasten the lid. It had to be something special. He had never seen something so brilliant.

“We should take this to the elders. They will know what to do with it.”

“Yours? No, this is something magical. Can you not feel the pull, my brother? This is not something to trifle with.”

“I said it is mine, Dji. You will turn it over to me at once.” Zareb did not care how childish he sounded. The object called to him. He must have it.

“Let us see what the elders say. They will commune with the Ancients. Then we will know what we must do. Do you not listen to your lessons? Evil is everywhere. Why do you think they choose guardians? It is the right thing to do. We both know it.”

He did know the right thing to do, but in this moment his heart and head were pulled in different directions.

“I think the temptation is too much for you right now, Zareb. I will keep charge of it. If the elders say it is pure, I will turn it over to you.”

There was nothing for it. Zareb followed Dji’s lead back to their home.

Zareb shook himself from the past. He didn’t want to think of what had happened next. He had to keep Joy safe. He might have failed to protect his friend from the evils of the universe and the Vessel they’d found, but he would not fail his mate. His heart. His very soul.

The plane that would bring him home to the place where it had all begun shook and rattled before crashing into the jungle.

a fast paced adventure, with danger around every turn...Ms. Jones raises the heat level in this with several hot scenes, both in the jungle, and again back in civilization...I recommend that this series...

Oh wow, this fourth installment blew my socks off...This was one of the best series I have ever read, and I hope that this series keeps on going. The sizzle was phenomenal and it's definitely a...

Share what you thought about Origins and earn reward points.