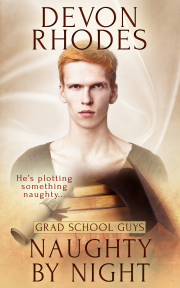 Normally, finding the hot neighbor in bed with your boyfriend would be the end—not the beginning—of a wonderful relationship.

Marty can’t catch a break. Unable to confess to his neighbor Kevin that it’s Kevin he’s interested in, he ends up using advice to make a move on Jason instead. He moves too slowly, though, and Kevin and Jason end up dating each other, leaving Marty out in the cold.

Everything changes the morning Jason wakes up to find Marty in bed with him and Kevin. Jason wonders whether he’s made a big mistake in committing to Kevin. Marty’s mortified—he’s wanted Jason from afar for ages, but never had the courage to act on it. And Kevin is plotting something naughty that will give all three men what they’ve wanted all along.

At first Marty thought he was hearing it wrong, then he processed what his boyfriend Kade was saying. “What…what do you—?”

“Seriously. It’s you. You’re neurotic and awkward and kind of a drag to be around.”

Marty sat up in bed and gaped at Kade as he wriggled into his jeans. Sweat—and other stuff—was still drying on Marty’s skin, but that wasn’t what made him feel dirty right then.

“Are you breaking up with me?”

Kade rolled his eyes as he put on his shirt. “Yes, Marty. And that’s exactly what I’m talking about. At first it was sorta cute how clueless you were, but I’m so over it. I need someone fun in my life.”

“One for the road. You enjoyed it, right? Consider it a parting gift.” Fully dressed, Kade glanced around the room, probably making sure he had everything.

Marty followed suit. “Don’t forget your watch,” he pointed out.

Kade’s eyebrows rose and he gave an exasperated huff of displeasure, something that Marty wasn’t exactly unfamiliar with. Kade stomped to the bedside table to grab the faux Rolex and paused for a moment, looking down at Marty. “You could care less.” He shook his head, frowning as though Marty had done something else wrong.

“I mean, why aren’t you freaking out? You should be yelling at me for using you and dumping you. Have some self-respect!”

Why Kade was the one shouting, Marty couldn’t begin to imagine. He shrugged. “I don’t know why you think I should get all crazy. It’s not going to change your mind, right?”

“Arrgh!” Kade threw up his hands. “I’m outta here.” He strode from the room.

A few moments later, his apartment door slammed and Marty gave up trying to figure out what he’d done so wrong that—yet again—another boyfriend had broken up with him. Right now, he just really needed a shower.

Under the streaming water, his mind kept returning to what Kade had said. None of it was false—Marty could admit to that. He was awkward and socially inept. Maybe not textbook neurotic, but he had his quirks and mis-wiring. Most of all, he was definitely clueless. For some reason, he’d never had a hard time attracting men. It was keeping them once they got to know him that was the problem.

Maybe he was going about things all wrong. It had seemed simple enough once he was old enough to start dating. When a cute guy came on to him, they’d sleep together. Done deal. Didn’t make him a slut or anything, no more so than any other college-aged guy, but it seemed unnecessary to go through a lot of rigamarole when you could just cut to the chase and get each other off. That’s what attraction was all about.

But sex hadn’t even been the problem with guys. It was what happened when they all zipped up that stymied him. It was like they were all following some book of rules that Marty had never seen, and he kept getting things wrong. That, and he was a pretty boring guy. He had his job and took a few classes here and there, but he wasn’t really passionate about anything. He didn’t have an interesting hobby, play a sport, or even have a field of major that he was really into.

He’d taken a class once, Social Psychology of Friendship, and so he knew that males tended to form friendships around activities. He wondered if he still had that textbook.

Marty hadn’t really cultivated any friendships while in school, and much of that was probably due to his parents being so overly protective that they’d never allowed him to join any outside activities, other than church ones. But even there, most of the kids were already friends outside of bible school or were involved in sports or allowed to go to other people’s houses to play. When he was really young, he’d had a couple of guys in the neighborhood who would play with him, but as they’d gotten older, they had developed their group of friends, and he hadn’t fit in.

Marty washed his short hair, which was the bane of his existence. He grimaced as he tugged at it with his fingers—it grew so damn fast. Time for another buzz cut. He’d had a slew of nicknames over the years—Carrot-Top, Strawberry Shortcake, Spaghettio, even the Splatting Tomato, a less-nice play on the Flying Tomato, which was what the very cool Olympic snowboarder Shaun White got ‘teased’ with. He had sympathy for the guy, whose hair was almost identical to Marty’s when it had been longer. At least Marty wasn’t known in the international media by a name he hated. He’d read somewhere that Shaun really didn’t like it, and why would he?

My heart was doing that racing thing, where I'm heart-wrenched for the character. Hence the 5 stars for making me feel.

The reader sees the narrators from the previous book, as no doubt we me...

I love how Devon Rhodes took a relationship between these three men that seemed virtually impossible and was able to make them all into something more.

Devon made these characters so that they comp...

Share what you thought about Naughty By Night and earn reward points.

Other books in the Grad School Guys seriesView Series Page