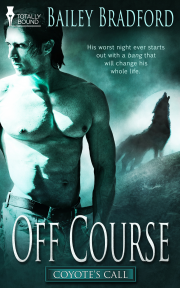 Book 1 in the Coyote’s Call series

Gideon’s worst night ever starts out with a bang that will change his whole life.

Gideon Wells has been cast out of his bear shifter clan for being a curse, and he’s inclined to believe they’re right. After all, everything from fertility rates to shifting abilities has gone down the tube since he was born. Then when his car catches fire and mutant scorpions—he thinks they’re mutants, anyway—almost get him, he’s more certain than ever that he’s bad news.

Not that he’s just going to roll over and die.

Ignoring a prophecy might not be wise, but coyote shifter Miller Hudson has seen and heard too many false prophecies to put any faith in the one proclaiming him to be the alpha and—along with a mystery bear mate—the saviour of the now defunct coyote den he grew up in. Besides, there’s no need for the den to be brought back together. None of them can shift, so what’s the point?

The buzzards circling overhead on the far edge of his property lead him to the very last thing he ever expected to find.

At a quarter after three on August twenty-first, Gideon Wells’ car started sputtering, the gas pedal suddenly useless as he coasted down a desolate Texas road. Gideon knew the exact time since it was in the morning and he was now stranded in the middle of Texas without a cell phone or anyone to call, even if he’d had one.

He did note the temperature gauge, since the needle to it was deep in the red zone. Then the whole car shuddered, smoke and flames shot out from under the hood, and Gideon’s impending self-pity was drowned out by sheer terror as visions of him dying a hot, fiery death flashed through his head.

Gideon didn’t worry about his keys or anything other than surviving this hellish experience. He did grab the duffle off the front seat just before leaping out of the car.

At least he’d braked to an almost-stop first. But with the flames and all, putting the car in park hadn’t really occurred to him.

The ground was hard, without even a smidgen of grass to cushion his landing. A grunt was knocked out of him, and Gideon hoped he hadn’t broken any bones.

He heard a loud popping sound, followed by grinding and what was most likely metal on metal somehow—the car going through one of those barbed wire fences, he supposed. Gideon got a breath in, deciding his lungs worked and no ribs were broken. He started to roll onto his side when movement not three inches from his face caused him to freeze.

With the car ablaze and a full moon out, Gideon had no trouble seeing what was waving at him. He just had a hell of a time getting his brain to process the image his eyes were sending it.

Once that all flowed together, terror flared to life in every cell in his body. Gideon tried to scramble back but his limbs seemed to have forgotten they were supposed to follow his orders.

The scorpion was huge, like something out of a horror movie. It had too damn many legs—and a really scary tail that curved up and around.

Gideon couldn’t seem to look away from the creature while his thoughts spun chaotically. Surely it has more than eight legs. Is that right? That can’t be right. Only spiders have eight legs. Well, octopi have eight tentacles—and there’s centipedes… It had to be some kind of freak of nature, a scorpion with twice the legs it should have, or maybe a centipede-scorpion mutant.

And that was when he realized there were two scorpions entirely too close to his person. As far as he was concerned, a continent between them would still have the nasty things too close to him.

Should he move? Maybe his body knew better than his brain what to do. If he scrambled back, the scorpions might very well attack him, like the predatory dogs that saw such retreats as a sign of prey.

Did scorpions eat people? He didn’t think so, but they were poisonous. Possibly not to him, but even if the venom didn’t do him in, he’d die of fright if one bit him—or drown in the puddle of piss he made.

“B-back,” he stuttered, and when his breath hit the scorpions—or maybe just the sound of his voice did it—they sure seemed to wave entirely too many legs at him.

Gideon took that to mean the nasty shits were signaling a charge. His screech of utter horror made his own ears ring and his head throb. It also broke him out of his frozen trance. He shrieked nonstop as he first scrambled to his feet then ran.

Whether it was his imagination or not, he saw things moving all over the ground. Gideon couldn’t shut up, couldn’t force his panic and fear to stay down past his throat.

He ran, but glanced back. Another lightning bolt of horror hit him when he saw the huge fire behind him. Apparently, the car had set a field on fire. Now he’d be in deep shit for arson or something like that.

“Shit!” And no man of his height—six-four, thank you very much—and weight—two-twenty, almost all muscle—should sound like a terrified five-year-old girl trying to say bad words.

Gideon turned back around and resumed running, hoping and fearing that he was stomping on scorpions every time his feet hit the ground. He didn’t know where he was running to, only that he didn’t want to get in trouble for the fire, and he didn’t want the creepy critters to get him.

He considered shifting, but there was the duffle bag that held all his earthly belongings. If he had someone there to strap the bag onto him, he’d have been fine, but he wasn’t leaving his few possessions behind.

So he stuck to human form. It was probably for the best. He was in Texas, after all. Everyone had guns, arsenals, and if anyone spotted a brown bear running past, they’d turn him into one of those stupid rugs in no time at all.

Plus, there’d be a lot of questions about why there was a grizzly bear in Texas. Not that he’d have to answer any such questions. He’d just be dead and keeping the dust off some bastard’s floor.

If he survived the night and if he ever had kids and grandkids and so on, this was not the kind of story he’d be sharing with any of them.

Gideon’s night vision wasn’t all that great, not better than a regular ol’ human’s would be. He was a special shifter like that, his senses all but parallel with any regular person’s. It was part of why he was on his own.

He wasn’t going to think about the other reasons he’d been driving across Texas, heading from North Carolina to he didn’t even know where. Not Texas. That hadn’t been his end destination. It was too hot there, and already he was soaked in sweat. It had to be at least eighty degrees, and that was just wrong for three in the morning.

The moonlight was a boon once he was farther away from the fire. Gideon was quickly getting winded, not having been in the best shape to begin with. Maybe he was a tad softer in the belly than he’d thought. He’d put on a little winter reserve weight, and it was showing in how easily he was physically exerted.

After what had to be close to half an hour, he slowed down to walk. He really was in the middle of nowhere. There wasn’t a house or electrical light to be seen in the distance, no matter which way he turned.

There were, however, so many stars in the sky that he could spend eternity trying to count them. Off to the east, he could see the red and orange flares of the fire still licking up and up, as if they’d scorch the stars themselves.

The fire was just as terrifying as the scorpions had been. Gideon found himself jogging along instead of walking, no longer interested in staring at the stars and the beautiful sky.

Despite the distance he’d come, he could smell smoke. That inner core of him roared, fearful of being surrounded by those hellish flames. There wasn’t a creature on the planet other than man himself, that didn’t have a powerful, natural fear of fire.

And even a shifter in its human form still felt the terror his or her beast did.

Gideon’s heart pounded so hard he thought he could hear it. His pulse was racing, his lungs burning, chest heaving, legs cramping by the time he slowed down again.

After he had calmed somewhat, he continued walking. There was nothing around, not homes or businesses. He felt like he’d landed in the middle of a deserted planet and was utterly alone.

Share what you thought about Off Course PRINT and earn reward points.

Buy Now: £3.99
In from the Cold
Bailey Bradford

Buy Now: £6.99
In from the Cold PRINT
Bailey Bradford