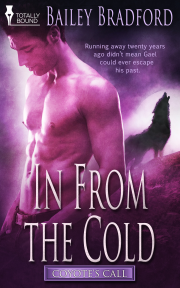 In from the Cold PRINT

Book 2 in the Coyote’s Call series

Running away twenty years ago didn’t mean Gael could ever escape his past.

Gael Martinez fled the small Texas town of Del Rey the minute he turned sixteen. Legal or not, he had to leave or end up dead. Life’s been hard, and everything Gael ever hoped for has been stripped from him. He’s close to giving up, so worn down from fighting to live every day. When incredible information reaches him that gives him a reason to hang in there, at least a little longer, Gael is afraid to hope for a better life.

An accidental encounter leads to him being told things have changed with the coyote den that had been floundering in Del Rey years ago. Miller Hudson, the coyote shifter alpha, had found his mate, and the den was now flourishing—and the biggest miracle of all, some of the shifters could now actually shift.

As tempted as that makes him to return, it could all be a bunch of lies and Gael is still hesitant, even though he yearns to go home. There’s no point if he’s only likely to be killed. Dying at another’s hands isn’t the way Gael ever intends to die.

It’s only upon discovering the changes regarding some of the humans in Del Rey that allow Gael to truly consider going home.

What he finds in the small town is more than just a home. He finds himself, and the man he’s always meant to be.

Winter in El Paso, Texas could, on occasion, be as brutal as the hellish summers. Granted, it didn’t get down into the single digits, and there weren’t blizzards—though snow was possible on the rare occasion. Still, temperatures in the twenties and thirties did happen and it sucked.

One of these days, Gael Vasquez figured the cold would kill him. Funny, since he was supposed to be a coyote shifter and all. But since he couldn’t shift—wasn’t, in fact, different from any of the other people in the city of El Paso in that they were just human—his heritage didn’t mean shit.

He was just a man, a homeless man who was invisible to society. Whether he lived or died only mattered to the people who’d have to haul his stiff body up off the ground if he bit it. They’d only care because he’d be an inconvenience. Same with the morgue workers.

Gods, he had to stop being so morbid. Gael closed his eyes and leaned his head back against the cold brick wall in the alley. There was a little sliver of sunlight sneaking in between the buildings, and he was trying to let the warmth from it soak into his bones.

He didn’t think he’d ever be warm again, at least not until May. Then he’d start roasting from the inside out because life in El Paso in the late spring and summer meant triple digit temps almost daily. There were exceptional days. Gael savored them, too, keeping them in his memory for when things were feeling particularly hopeless.

For over half of his life, he’d been struggling just to survive. He was afraid he was nearing the end of that will to go on, which had helped him make it to the ripe old age of thirty-six. Gael would have thought he’d have died before he hit twenty, then once he’d surpassed that age, he’d bumped his life expectancy up a couple of years.

And that was how he’d made it as long as he had, but goddamn…he was tired.

Tired and hungry, and…and so hopeless inside, he just didn’t know if he cared anymore. He was pretty sure he didn’t.

But for that moment, the sun felt good on his face, and he had the food he’d scrounged from the trash can filling his belly. He’d lucked out by being in the alley across the street last night when the restaurant employee had thrown out several buffet bins of food.

Gael hadn’t been greedy. He’d taken his share then passed the word on to Duff that there was food to be had. Together they’d gotten the edible stuff out and shared it with the other homeless people in the area. Sometimes luck was on his side like that, but more often than not, he was hungry and dirty and without hope.

Tired. I’m always tired, too. Gael rolled his neck, trying to work out an ache that never seemed to go away. It probably had to do with sleeping on the ground. The shelters had been full to capacity every time he’d tried to get into one lately, and several of the places he knew of had been closed down entirely. He’d heard there was some new ordinance or whatever that was making it harder on homeless shelters.

It figured. No one cared about the transients. They weren’t people, weren’t names—weren’t anything more than nuisances. Gael had seen it and lived it for too long not to understand what he and those like him were.

He’d been homeless on more than one occasion since running away at sixteen. Twenty years he’d been on his own, and while he’d had it rough, there’d been more times in his life when he’d had shelter than not. But homelessness happened, especially when he didn’t have an education or even a GED or ID, period. There were only so many options available to him, and when he’d first left home, he hadn’t had a clue how to survive on the streets. Gael guessed he was lucky he’d made it as long as he had. He doubted he’d make the next two-year mark.

His pack was small and contained very few items. When he’d first lost his crappy motel-apartment, he’d had more things. Over time, he’d traded or sold what he could in order to buy food. He’d just never had much to begin with.

Now he was down to his blankets and two pairs of socks besides the ones he had on. Bubble wrap that had probably saved his life when he used it to insulate himself and help keep warm. Two old carabiners. An almost empty water bottle, a comb with half the teeth missing, a toothbrush with bristles so frayed it was damn near unusable, and the necklace with the golden heart-shaped charm that he’d kept hidden for twenty years. Gael was so afraid of it being stolen that he hardly ever took it out to look at it. Even though it was just a cheap piece of jewelry, someone could probably get a few bucks for it, and a few bucks could buy a meal, at the very least.

No matter how desperate he’d been, how much his stomach had ached and cramped, he’d never considered selling his mom’s necklace.

Gael took a few more minutes to just exist, then he opened his eyes and—with his pack clutched against his chest—he left the alley. There was a gas station a few blocks down.

The owner of the place was more tolerant than most when it came to homeless people. She didn’t have them thrown off the property, didn’t object to them using the restrooms there as long as they didn’t abuse the privilege or inconvenience paying customers.

Once she’d even given Gael a sandwich and a bottle of water. He’d come back a few times, hoping to get another sandwich, but she’d never offered again and he wouldn’t ask—not unless he was so hungry he couldn’t stop himself. Then pride was a stupid waste of time and he’d beg, while hating himself more and more with every word that passed from his lips.

Pride. Why did he think he had any left? And yet sometimes, that was all he had—that and his meager belongings. Not much to show for thirty-six years on the planet.

The gas station was customer-free, which worked in Gael’s favor. He nodded to the clerk, a young woman who made him ache for his own youth. She didn’t acknowledge him.

Being ignored didn’t bother Gael anymore. In fact, it tended to work in his favor, except when he was asking for money or food. At least with that, lately there’d been an increase in people handing out plastic bags filled with useful items like hand sanitizer and protein bars.

Once he’d even been given some gift certificates for McDonald’s, which had been—well, it’d made him cry later that night. Thinking of those baggies now reminded him that there were more good people in the world than he tended to remember. Unfortunately, they were still too few and the homeless were still too invisible or scorned by more people than not.

In the restroom, Gael did his best to wash up. The hot water was a blessing, and his eyes burned with useless tears as the warmth made his fingers first ache then tingle. His mental state had been deteriorating more and more lately. He’d always had some trouble with depression, though maybe it’d been because of what’d happened back in his hometown of Del Rey early on. Later it was just because life was so damn hard.

Even so, he wanted to live most days. Occasionally he had the thought that it’d be easier if he just didn’t wake up, but that wasn’t the same as wanting to actively kill himself.

Gael thought longingly of his tiny, run-down former dwelling place. He’d lost it over a year ago when the restaurant he’d been working at had been shut down by the health department. His second job at the piercing shop hadn’t provided enough of an income for him to pay the rent with. He’d missed work one night and been fired because of it.

Then he’d been back on the streets.

Share what you thought about In from the Cold PRINT and earn reward points.

Buy Now: £3.99
In from the Cold
Bailey Bradford