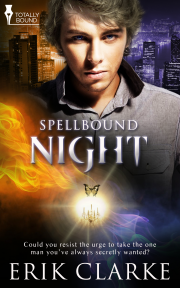 Book 1 in the Spellbound series

Given the powers of an Incubus, could you resist the urge to take the one man you’ve always secretly wanted?

Or so it seems to Cole Turner, a Seer who can See everyone's future except his own, when a gift from his Dreamwalking best friend Luke turns his world upside down. Overnight, Cole gains all the allure of an Incubus, drawing suitors to him like moths to a flame. But after a few days of revelling in the fun, reality takes a turn—the mysterious drug he took, known only as "Night", had to come from someone, and that someone is pissed, on a homicidal scale. Each sexual encounter makes Cole’s attraction grow stronger, making it ever-more difficult to just walk outside. And Luke, the Seer's go-to in times of need, now wants him like everyone else, a point made even worse by the secret desires Cole has for the friend he had always assumed was straight.

Swamped in sex, powerless to See if the future holds any hope for salvation,  and at constant risk of losing both his best friend and his life,  Cole is about to find out if he's strong enough to beat the Night racing through his system—and if his relationship with Luke is strong enough to survive it as well.

“Seriously, Luke, I’m going to be late!” I called backward over my shoulder to the Dreamwalker, wherever the hell he was. Last thing I had heard was him mumbling something about needing to grab more papers to roll before he had disappeared to some other part of the apartment. I tossed the Xbox controller to the floor, leaving the game at the pause screen—I had told Luke that I needed to leave soon so I wouldn’t miss my date. But he’d kept coming up with things to distract me, like showing me the new shooter I’d been dying to play for a week when he knew I didn’t have time to be playing it, the asshole.

I wandered around the counter into the kitchen. I was about to go out to dinner so I didn’t need to eat, and I had to drive back to my own apartment to get ready, so I wasn’t going to be able to drink anything either. I still perused through the room, opening cabinets and drawers even though I knew exactly what was in each of them. I knew Luke’s place better than my own, considering my organisation-freak of a roommate, Jake, was constantly moving shit to make it more ‘efficient’—whatever the hell that meant. It was a kitchen, for God’s sake, how efficient did it need to be? I swung open the refrigerator door, staring mindlessly at the items looking back up at me from the washed-out fluorescent glow.

My date really was getting close, and since Luke was busy finding whatever it was he was looking for, I swung the door shut again with a plan to just shout a “See ya” over my shoulder on the way out. But just before the fridge sealed closed, a tiny glimpse of silver caught my eye. I threw my hand out to catch the door and managed to get my fingers thoroughly crushed for my efforts. That was me—Cole Turner, the epitome of forethought. With a muttered “Fuck,” I reached blindly for the tiny vial I’d seen.

I pulled the glass tube out into the light and almost immediately dropped it when I realised how warm the thing was—it was like a tiny furnace, threatening to burn my fingertips. How could it have been that hot when it had been in the refrigerator? I rolled it over in my hands, watching as the mercury-silver fluid twirled beautifully in its translucent suspension, coiling and helixing like it had a mind of its own.

The sound of shuffling feet made me finally tear my eyes away from the show. Luke rounded the corner and stepped into the kitchen, his messy hair looking even more trashed than usual. He looked up from the joint he’d just lit with glazed-eyed disinterest—a look that shattered the instant he saw what I was holding. The Dreamwalker’s eyes widened, making the green stand out even more poignantly as he froze in place.

“Luke, what the fuck is this stuff?”

His mouth opened and closed blankly for a second, and I couldn’t help the smirk that was tugging at my lips. In all the time I’d known Luke, I’d never seen him actually embarrassed about something he’d picked up—which just made me want to know what it was even more. He squirmed for a half second longer before taking another drag and letting the smoke tumble out of his mouth lazily. “It’s…just some shit I bought off a Were-shifter.”

I cocked my eyebrow and stared him down, spinning the vial between my fingers. “Okay, but what is it?”

Luke shrugged noncommittally, but he couldn’t hide the way his eyes refused to leave the little tube as I twirled it. “It’s just…stuff, you know?” The Dreamwalker ran a hand through his hair. “It’s called Night.”

“Night, huh?” I took another look at the vial and the silver swirls it contained, then tossed it to Luke. He caught it reflexively, and I patted him on the shoulder as I stepped around him to head for the door. I wanted to keep pushing him for more, but I didn’t have time. Besides, he’d tell me later anyway—Luke had never been good at keeping secrets from me. “Well, Mr Mysterious, I’ve got to head out before you make me even later tha—”

I stumbled to a halt an arm’s length from the door. I turned around in confusion, but Luke wasn’t looking at me—he was staring seriously down at his palm, at the tiny coils of mercury that moved without a care. He looked up after a beat, nodding in a way that seemed more for his benefit than mine.

Luke scratched his head, coming around the side of the counter so he could approach me. “You…” The Dreamwalker paused, staring out into nothing for a second, and I honestly couldn’t tell if it was because of the weed or—God only knew what, at that point. Luke shook his head, pulling back down to reality as he caught my gaze again. “You feel like you have no control in your life.”

The words rattled around in my head for a few seconds, and I ran my hand along my other forearm as the truth of that statement really started to sink in. I’d never put it quite so succinctly, but after listening to my problems for seven years, Luke seemed to have found a surprisingly accurate way to sum it all up in ten little words. Before the barbed memories could hook in too tightly, I forced my face to crack into a smile, a lie that hurt more than I’d expected. “Tends to happen when you’re a Seer who can See everyone’s future but your own, I guess.” My voice was light, but I couldn’t stop the smirk from faltering as my eyes honed in on that little bottle. “Occupational hazard.”

The Dreamwalker’s expression softened and his thumb ran over the length of the glass for a moment before he extended his hand out toward me. “This’ll give you control.”

I stared at my best friend like he’d gone insane—because if he honestly thought whatever was in that tiny vial could fix the problems in my life, he really had to be nuts. But at the same time…

In Night a latent seer discovers the down side of sexual overkill and pays the price.  The first book in the Spellbound series offers a unique situation when Cole is faced with m...

Share what you thought about Night and earn reward points.

Why do you have a love/ hate relationship with Arizona?

There is a lot to love about Arizona... the scenery is gorgeous, the weather's consistent; you never have to worry about a tornado, or a hurricane, or earthquakes. But the toss up to that is definitely the heat.