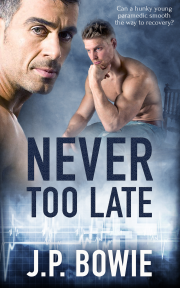 Knocking fifty isn’t bad enough? Jared Haas gets a double whammy when his doc tells him he needs a hip replacement. Can a hunky but too young paramedic smooth the way to recovery?

Jared Haas isn’t happy. On his own for more than two years after his partner of twenty years, Daniel, died, he’s knocking fifty and now his athleticism is threatened by, of all things, a hip replacement. How to make a guy feel really old! At least there’s eye candy nearby in the very nice shape of Steve Forrest, a hunky paramedic who is willing to take more than just a professional interest in Jared’s welfare. The problem is, in Jared’s opinion, he’s too young.

Steve is persistent, though, telling Jared that the difference in their ages isn’t ‘the Grand Canyon of time’. His good looks and sweet nature, not to mention his patience in waiting for Jared to heal before making his move, eventually wear Jared down, and the first time they make love, Jared knows he is lost in lust. Something he never thought possible.

Their idyll is shaken when Daniel’s brother shows up unexpectedly and declares his love for Jared. David has left his wife and his job back in Seattle ready to move in with Jared and claim him as his own. To say Jared is taken aback by this strange turn of events is putting it mildly. How can he tell David he’s completely delusional without breaking his heart?

Here’s another situation Jared never thought he’d have to deal with, only this one isn’t nearly as pleasant, and might prove to be the end of his relationship with both men.

Sitting in a doctor’s waiting room was one of the things Jared Haas detested more than he detested peanut butter. Four years earlier, his partner, Daniel, and he had spent hours in waiting rooms like this. Daniel had been undergoing tests for what seemed like forever—blood tests, urine tests, bone density tests, liver, kidney, lung, prostate tests in the vain search for what ailed him. Amazing that during all those tests, the cancer that would kill him had remained hidden until a year later when, after he’d complained of stomach pains for several days, Jared had finally convinced him he should go see the doctor again.

The doctors had found a tumor in his stomach lining and started Daniel on an aggressive treatment regimen, but Jared still believed that the chemotherapy they’d prescribed had killed Daniel. He’d rallied for a short time after the sessions began, but three months later he’d gone into a decline from which he never recovered. They had been together for close to twenty-five years, but Daniel died just before the Supreme Court threw out Proposition 8. They had planned to marry if and when that happened.

I’d be a widower now anyway…

That’s the problem with doctors’ waiting rooms, he mused. Waiting gives a person too much time to think. The old copies of Time and People couldn’t hold his interest for long and thinking was what he did a lot of anyway, in or out of a waiting room. His friends told him that he dwelled too much in the past. They might think they were being kind and helpful, but honestly, he thought sometimes, I wish they’d shut the fuck up. How could he not dwell in the past? The past was when he’d been happy, when he’d had the most wonderful man in the world in his life, in his home, in his arms.

At twenty-five, Jared still had been the shy and retiring type. He hadn’t had a lot of friends but the ones he’d had he was tight with. It was through them that he’d met Daniel, in a bar where he’d gone to join them one Friday night. Even almost twenty-five years later, he could remember that moment vividly, and knew that he probably never would forget it, just as he would never forget Daniel.

I loved how sweet this story was. Truly a beautiful story about believing in second chances.

When you want a story to remind you the power of true love this is the one to pick up.&n...

Never too Late was a comforting novella, with swift pacing and a warm and fluffy storyline that had unexpected depth in so few pages.

I enjoyed Never too Late, and found it exactly as it...

Share what you thought about Never too Late and earn reward points.