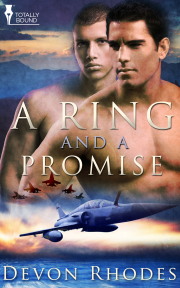 A Ring and a Promise

Careers in military service are never easy on relationships—even less so when both lovers are in different branches…and both are men.

Naval Academy graduation now under their belts, Cary Barrientos knows the reality of the upcoming separation from his roommate of the past four years. Owen is more to him than just his best friend—he is the one person Cary can see spending his life with.

Owen Marsh knew that when he became Cary's lover, the day would come when he would have to walk away. Now that day has come, and he's having a hard time convincing himself that it's just sex between them. Even with DADT repealed, there is no way a Marine and a Navy flier can be together. He's just being realistic not expecting more.

When Cary switches their Academy rings, hoping Owen won't notice, he makes a vow—he will do whatever he has to do, including believing enough for the both of them, to make their unlikely relationship stand the test of time. But when his Marine is called up for duty overseas, can a piece of jewellery and a promise be enough to get them through?

Publisher's Note: This story has been previously released as part of the His Hero anthology by Totally Bound Publishing.

This short story is delicious. Two men who are destined to be military men, but also clearly destined to be together. Sadly, now they have been commissioned their service will keep them stationed apart....

I really enjoyed this story, the tenderness, the growing respect and need for each other was so carefully mapped out by the author...Devon Rhodes offers up a sweet story of love that overcomes a great...

Share what you thought about A Ring and a Promise and earn reward points.