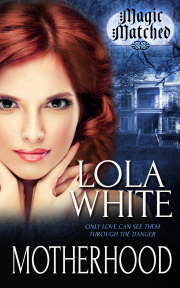 Book 3 in the Magic Matched series

Christiana Davenold doesn’t want to be Mother, but her husband is pushing for her to be named heir. Milo just wants to protect his wife, and he believes the position of leadership would keep her, and their unborn child, safe from the challenges of her cousins.

But Mother Madeleine refuses to name a successor.

As the Davenolds gather in the hopes that they can heal their Mother from the dark magic attack that has left her weak and near death, Silviu Lovasz and Georgeanne Davenold find themselves at a turning point neither could have expected. Troublesome Family members, secret alliances and the unexpected arrival of Father Daniel Levy cause an emotional upheaval that will test them both.

Only love can see them through the danger, but in witching society, magic and politics are all that matter. The connection they’ve managed to forge will be tested as suspicion grows and trust is broken by the ultimate betrayal.

“Blood me as your heir.” Silviu Lovasz let his magic rise and weave into the tone of his voice, sending it out with his words.

Mother Madeleine Davenold nearly blended in with her pillows, pale and frighteningly motionless. Only her eyes still held evidence of the fierce woman she’d been a week ago, before dark magic had infiltrated her defenses. A woman who prized the concept of Family above all else. Family was everything to the old lady.

Silviu had experience dealing with such a sentiment, however, having often manipulated the same driving emotion in his older brother. Influencing others was a talent Silviu wielded ruthlessly, and in Madeleine’s weakened state, it would be easier than it had ever been before to gain a foothold.

“I will take care of them.” Silviu pushed a little harder. “Trust me.”

Silver light spread out over the woman’s fragile skin, shimmering brightly before sinking in. Her eyes glazed. Silviu felt his magic meet the Davenold strength and slip through. With the dark spell poking holes in her resistance, Madeleine couldn’t stand against him.

Burrowing deeper, his talent took hold as the woman’s breathing turned ragged. Magic set down roots and reached farther. Silviu had a vision of tendrils curling out—only to meet a snarling black wall that surged up to reject the influence with a violent expulsion.

Madeleine screamed softly, clutching her chest. Silviu was knocked back as the silver light retracted into his soul with a painful snap.

The dark magic had blocked his efforts.

The two witches stared at each other in grim astonishment. Madeline rubbed her chest with a shaking hand. “What was that?”

“Dark magic.” Silviu refused to elaborate. There was no way he’d admit that he’d tried to gain influence over her. He rushed toward her to evaluate the damage he might have done.

Madeleine’s pulse was weak but steady under Silviu’s fingertips. The magic coursing through her veins was cool and smooth, nowhere near the raging river it used to be. There wasn’t a trace of the dark magic energy that he’d felt, but that didn’t mean it was gone.

“Then why do you look as if you’re enjoying some private joke?”

Madeleine smiled. Her pale, papery skin stretched taut over her cheeks, lifting the sagging flesh until she appeared almost beautiful. A pang shot through Silviu’s chest as he realized his betrothed would look like the Davenold Mother when she reached the same age.

Madeleine’s voice was a thread of sound. “Because you’ve been doing all you can to save my life when it would be in your best interest to let me die.”

Something inside him rebelled at the thought. “That’s not quite true.”

“I suppose you think I can still be of use to you.”

Silviu closed his eyes and again searched for the spell draining Madeleine of strength and life. He couldn’t find the origins, couldn’t even feel its presence, but he could sense the changes within her. Every day she was weaker, every day a step closer to death.

“I expected to have your guidance when I joined the Council.” Silviu released Madeleine’s wrist and eased a hip onto the bed next to hers. “I haven’t even been formally named to my Family’s seat yet. I need your influence over others to further my cause.”

“I doubt that.” Her black eyes, still sharp with intelligence in spite of her ailment, narrowed. “You’ll do just fine on your own.”

“If I have to.” Silviu’s shoulder rose and fell as his mind busied itself with modifications to the plans that had been in place since he was four years old. “You taught me well, but it would be easier to have you at my side.”

He nodded, satisfaction racing through him at the old woman’s simple statement. “Yes, you’ve trained her well, too.”

Madeleine studied him for a long moment, a hint of suspicion in her eyes. Silviu met her gaze calmly, years of practice supporting his serenity in the face of such a thorough examination. His own father had a habit of watching him in the same manner.

“She knows how to handle herself in politics,” Madeleine finally said. “I’ve made certain she was an asset to you and your rise to power. And vice versa.”

“I know. We’ll work together to achieve our goals. She’ll cement your Family’s influence over the other matriarchal houses and extend your reach over the patriarchal witches when I lead the combined covens.”

“That was the plan.”

A plan that had been concocted twenty-three years before, when the matriarchal Mother had agreed to betroth her infant granddaughter to the youngest son of a patriarchal coven. Reap and Bane were the rarest of witches—one with too much magic, the other with none. Silviu’s Reap magic merged into the blocked Bane magic Georgie contained within her, making them the strongest Matched pair the world had ever known.

Silviu considered it their right to rule over the combined covens.

Legend suggested the pairing was able to join their talents into a force that could fell every witch before them. Together, Silviu and Georgeanne wielded a power that could pull each other back from the brink of death—a fact they’d learned when Georgie had nearly been injured by the same dark magic targeting the Davenold Mother.

“A thousand generations ago,” Madeleine mused, “our community was torn apart by countless wars. The witches who walked the traditional, matriarchal path versus those who wanted to follow Fathers.”

“I know the history very well,” Silviu reminded her.

She frowned him into silence. “And when the war eventually dwindled down, they all saw how devastating it had been. To the world and especially to our community. The truce resulted in the Schism, Silviu. Motherhouses to one side of the divide, Fatherhouses to the other.”

“With a High Seat to lead them all,” he said impatiently. “A position you’ve held for half your life, a position I intend to hold for the rest of mine. What is your point?”

“You’ve been trained to take that position. Every tutor I sent to you and every burden your father heaped on your shoulders has all been to get you to the top of the covens’ hierarchy.” Madeleine’s eyes flashed and a secretive smile played at the corners of her mouth. “But you won’t get there without Georgeanne. Witches respect you, Silviu, but you are still a Lovasz.”

Share what you thought about Motherhood and earn reward points.