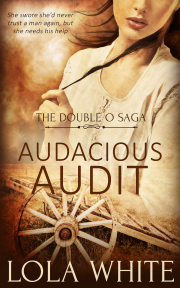 Book 2 in the The Double O Saga series

She has little choice—she swore she’d never trust a man again, but she needs his help.

Opal O’Neal doesn’t trust any man. Since her brother’s death and her husband’s departure, she’s been raising her nephew alone, standing on her own two feet as years of drought have left the Double O on the verge of foreclosure. She’s struggling to stay a step ahead of utter ruin, and an investigation by a Home Loan Bank Board auditor is the last thing she needs.

Samuel Hollister is diligent about going over all of Opal’s paperwork, but he’d rather go over all of Opal. Living in the Dust Bowl, she’s a feisty woman who’s been keeping body and soul together through sheer force of will during the Depression, earning Sam’s respect and fostering his desire to help however he can.

The fight for Opal’s rights against foreclosure can’t compare to the burdens of Mother Nature, though. When the biggest storm the region’s ever seen descends on the Double O and puts her nephew in danger, Opal has no choice but to place her trust in Sam—something she’s sworn she’d never do.

The sound of a shotgun being cocked, a bare second before the cold barrel came to rest against his nose. Though stillness reigned in his chest—his heart had stopped dead—there was a whole lot of movement in places much farther south. Places he couldn’t adjust due to the fact that his hands reached for the sky, in spite of the iron grip he maintained on his briefcase.

He cleared his throat and tried not to look as fascinated as he felt with the rough-edged beauty on the other side of the shotgun. “This isn’t exactly a warm welcome to the Double O, ma’am.”

Dark blue eyes narrowed, emphasizing the lines around them created by too many years squinting against the sun. “Who said you were welcome?”

The woman had the voice of an angel, if an angel had been forced to spend a great deal of time in the constantly swirling dust that had descended on Creek Bend over the past few years. She was a bit hoarse, but so were most of the people in those parts. At least she wasn’t gargling with the effort of dislodging the grit from her lungs—probably due to the protective handkerchief she’d pulled down below her chin when he’d emerged from his automobile.

Fighting to keep his gaze on hers, rather than dropping it to run over curves barely contained in a ragged pair of men’s breeches, Sam did his level best to seem professional. “I’m looking for Opal O’Neal.”

The woman gave no quarter, and if the situation hadn’t appeared so dire, Sam would have leaped up onto the rickety porch the woman defended so fiercely and taken her into his arms. And kept her.

“My name is Samuel Hollister. I’m an employee of the River’s Edge Bank and Loan. I’m here to begin auditing the Double O ranch.”

“What the hell are you talking about?” The shotgun moved a few inches down and to the left, giving Sam another look at the beauty wielding it.

She wouldn’t have been every man’s cup of tea, but she certainly suited Sam. Her skin was browned from the sun, faint lines marring what should have been a smooth surface. Her eyes seemed bluer for the hue of her skin and her full lips were a deep plum—a little chapped, but so were everyone else’s, considering the dust. She had a line of freckles crossing her nose and wisps of dark hair escaped from her thick braid to curl around her strong jaw.

She looked tired, worn-down and struggling to keep body and soul together. Just like every other resident of Creek Bend, except for the spirit she showed. Sam sighed and slowly lowered his hands, wishing he wasn’t the lowest ranking man employed by the River’s Edge Home Loan Bank Board. With another few years under his belt, he’d have had seniority and a nice desk, and wouldn’t have had to make the rounds to the unfortunates on the verge of losing everything.

Sam cocked his head. “Pardon me?”

“O’Neal was my daddy’s name, not my married name.”

Sam’s heart, which started thrumming in his chest once he stopped staring down the business end of the shotgun, sank to his toes. “You’re married?”

“Not anymore. Since the bastard hardly did anything to my advantage while we were together, I didn’t feel the need to keep on pretending to be his after we parted ways.” The woman lifted her chin. “I petitioned the courts to get my name changed back to O’Neal.”

“A woman of courage.” The words slipped out on a warm current of relief that made Sam a little unsteady on his feet.

“A woman of confusion, Mister Hollister.” The shotgun jerked. “Why are you here to audit my ranch?”

“It’s in your best interests, Miss O’Neal. Considering the amount of money you owe the bank for your property, the River’s Edge Home Loan Bank Board sent me here to go through your paperwork and see what we can do about refinancing your mortgage.”

Opal dropped the butt of her gun to the wooden planks of the porch and leaned against it as if a good deal of strength had gone out of her legs. She opened her mouth, only to close it, then swipe at her hair, then repeat the process twice more.

The author did a great job bringing the harshness that was the Dust Bowl to a new generation and the resilience of those who lived through it.

Share what you thought about Audacious Audit and earn reward points.

Other books in the The Double O Saga seriesView Series Page