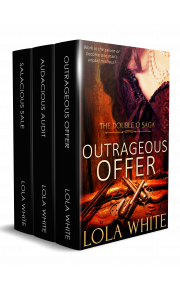 She has a choice to make—work in the saloon or accept an outrageous offer of being one man’s unpaid mistress.

Hyacinth Woodley is a desperate woman. Officially deemed a spinster with no marriage prospects in sight, alone after the death of her parents and out of money, she answers an ad for a mail-order bride, only to be rejected by her groom upon her arrival in Creek Bend.

Offer O’Neal is the new, less-than-proud owner of the Double O Ranch. After sinking every cent he had into the property, he’s left staking his dreams of success on stud fees from his horse, the only thing of real value he’s got. He can’t afford a wife, but a willing woman in his bed is an appealing prospect, and Hyacinth’s got nowhere else to go.

Just as Offer starts thinking of Hyacinth as the one bright spot in his otherwise stressful and unlucky life, the bridegroom who rejected her returns, demanding repayment for his investment. Ernest Horsham feels he’s spent a lot of money on getting the woman to Creek Bend under false pretenses, and the judge is on his side. But it’s only when Hyacinth is arrested as a thief and a fraud that Offer realizes how much he values her company.

She has little choice—she swore she’d never trust a man again, but she needs his help.

Opal O’Neal doesn’t trust any man. Since her brother’s death and her husband’s departure, she’s been raising her nephew alone, standing on her own two feet as years of drought have left the Double O on the verge of foreclosure. She’s struggling to stay a step ahead of utter ruin, and an investigation by a Home Loan Bank Board auditor is the last thing she needs.

Samuel Hollister is diligent about going over all of Opal’s paperwork, but he’d rather go over all of Opal. Living in the Dust Bowl, she’s a feisty woman who’s been keeping body and soul together through sheer force of will during the Depression, earning Sam’s respect and fostering his desire to help however he can.

The fight for Opal’s rights against foreclosure can’t compare to the burdens of Mother Nature, though. When the biggest storm the region’s ever seen descends on the Double O and puts her nephew in danger, Opal has no choice but to place her trust in Sam—something she’s sworn she’d never do.

Olivia Raines is trying to make her ranch a commercial success, but the odds—and the town mayor—are against her. Her elderly neighbor is in poor health, so she turns to his grandson for help, determined to use everything at her disposal, risking even her heart, to get the security she needs.

With his grandfather’s medical bills piling up, Creek Bend’s mayor demanding their water rights and Big Oil offering cash on the barrelhead, Cody O’Neal admits that the sale of the Double O seems inevitable.

He has to decide which is worth more—riches, after generations of struggling for prosperity, or love, the only thing the O’Neals have ever gotten right.

“Dang, woman, I can hear your caterwauling all the way down at the post office.”

Only vaguely hearing him through her sobs, Hyacinth didn’t recognize the deep male voice, but that wasn’t surprising. After all, she’d only been in Creek Bend for thirty minutes—just long enough that the stage coach had departed. Just long enough to have fear tearing holes through her stomach as the prospects of her future turned darker than they’d ever been before.

“Oh, leave me alone!” Hyacinth turned her back on the male voice at the same time she shot to her feet, but a low whistle kept her from leaving—not that she had anywhere to go.

“God have mercy, woman. You here to work in the saloon? Tell me when you start and I’ll scrape a few dollars together to visit you.”

Hyacinth collapsed back onto the rickety bench as a new wave of terror tore her legs out from under her.

“But I’ve got to be your first customer, darlin’,” the stranger continued, “because them other ladies are all diseased, so it’s only a matter of time before you are too. It’s a shame, but unavoidable. For them, that is. I just forego their company, but it’s been a while and if I could be your first—”

“Oh, dear God! I can’t work in the saloon.” Head lowered into her hands, she cried harder.

“You waiting to go home, then? Because someone should have told you that the next stage won’t come through here for another two days.”

Home. No, she couldn’t go home. Not with all the nasty—though admittedly true—rumors going around. Not with her parents in their graves and the money they’d left her gone. Not with the man she’d thought to marry starting a family with another woman.

Hyacinth was beyond hopeless. Her sobs turned uglier, racking her body on the bench set along the splintered wall of the coach depot.

A sigh reached out to her and heavy steps crossed the shoddy boards half-buried in the muddy aisle the backwater town in the armpit of the American frontier insisted on calling a street. Through her tears, worn leather toes and ragged dungarees came into sight.

“You all right, ma’am?” The tone of the voice didn’t imply that its owner cared.

“No!” She answered his question in a shrill wail. “Does it look like I’m all right?”

“Don’t know. Can’t hardly see you anymore, considering the way you’re all hunched down over your own lap. What I did see was nice, though. That’s a real fine drape to your skirts, ma’am.”

Hyacinth pried her fingers off her brow, but she didn’t raise her head. Having seen enough horrified shock cross men’s faces to last a lifetime, she didn’t want to let the stranger see her eyes. She made an effort to control herself, but tears still tracked down her cheeks and dripped off her chin.

A frayed bandana was thrust into her newly-unoccupied hand.

“Thank you.” She crumpled the handkerchief against her nose. “Your kindness is appreciated, seeing as how I’ve been abandoned.”

The boots in her line of sight rocked back on their heels. “Well, give it a few more minutes and I’m sure somebody ‘round here will claim you. Women are in short supply.”

Hyacinth shook her head and let another sob break from her throat. “Oh, no man’s going to claim me. Not after the scene Ernest Horsham just enacted.”

“Hmm, tough luck then. So, you’re waiting for the next stage?”

“I don’t have the money to go back home. I don’t even have a home to go back to.” Hyacinth took the briefest moment to wipe her nose then continued as if the stranger had asked for further explanations. “I was supposed to marry him—Ernest, that is—but he has rejected me. I have no money, no place to go, no way to get back East. I have nothing and after the things he said, no one will help me.”

“That is too bad, ma’am. Good luck and all that.” The boots turned away and took a step. Then they stopped and did an about-face. “You’re the mail-order bride?”

Hyacinth nodded and plastered the handkerchief over her eyes. “It was a terrible idea.”

“It sure as hell was,” the man agreed. “Jesus, woman, he posted that ad in a hearts and hands catalog. Butt of the town’s jokes for quite a while, but then he got all puffed up when you agreed to come on out here. I’m surprised he rejected you, considering both his pride and the way your back end looks.”

“I’ve been accused of worse. Why did he tell you to take a hike?”

The man’s words struck deep and bounced off a steely core Hyacinth wouldn’t have guessed she had. Abused pride flooded her, finally stopping her tears as her chin shot up. She whipped the bandana off her face and jumped to her feet, bracing her fists on her hips.

She raked the man with her gaze, not that he noticed. His eyes were busy burning a path up her body, leisurely perusing the heavy skirts hiding her legs, lingering on the wide curve of her hips, which were unfortunately emphasized by her short jacket. He dragged his scrutiny higher but seemed to get caught on her chest. Hyacinth fought not to cross her arms over her bodice.

Share what you thought about The Double O Saga Box Set and earn reward points.