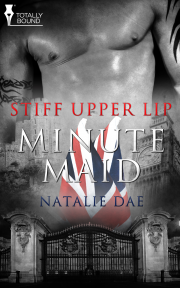 What's a woman to do when she's caught by a sexy man while spying on her boss having sexual relations then is offered more pleasure than she's ever had before if she'll only follow a simple rule—to act the part of their boss, a prostitute, while he plays her customer?

Lizzie Gould is a maid for a well-to-do woman and enjoys spying on her boss, who thinks nothing of bringing a different man home every night—unaware that her household staff know exactly what she's up to. Lizzie has been watching for years, longing to act out some of the antics she's learned…

Johnny Francis is a butler in the same household and has observed Lizzie watching their boss for months. He's hankered after her since the first day he started working there and longs to give her pleasure instead of Lizzie using her own hand.

One day, Johnny can resist no longer and lets Lizzie know he's in on her little secret. He offers to be the man of her dreams so she can replicate the wild acts she's seen. Lizzie agrees, playing the part of a prostitute to his customer, and finds she enjoys being in charge… But Johnny isn't who he seems. He's only a butler there because he saw Lizzie and fell in love with her. Will she accept him once she finds out who he really is?

"Would you look at that!" Lizzie Gould whispered to herself, bent double, arse sticking out as she stared through the keyhole into her mistress' bedroom. "She acts so prim and proper in front of the likes of us, yet there she is again, opening her legs wider than the bloody Thames!"

Emmaline Childs was sprawled naked on her king—size bed, slit glistening, long, blonde hair splayed over her white pillow. A fully dressed man stood at the foot of the bed, side-on to Lizzie, with slender hands on his hips. He looked like a dandy—a man who wouldn't enjoy getting his black, slicked hair sweaty or his hands soiled—but there was no doubt in Lizzie's mind he was about to. If that stiff cock tenting his trousers and the stern look Emmaline was giving him was anything to go by, he'd be as nude as the posh knob herself in no time.

"Wouldn't want a bit of the old 'how's your father' with him," Lizzie murmured, finding the man a little scrawny for her tastes. She preferred broad shoulders, a generous arse, and muscle on a man's bones. A bit like that Johnny Francis, the butler who'd started working here a few weeks ago. "He's a handsome fella if ever there was one."

She squirmed, sensations blossoming between her legs like they always did when she spied through the keyhole or thought of him. More often than not, Lizzie imagined the men as Johnny and herself as Emmaline, and touched her cunt until she panted just as heavily as the woman on the bed. She'd thought, way back when the war had started, that her mistress would find it difficult to snag bed partners, what with many men going away to fight, but it hadn't made a jot of difference in this household. When the siren had gone off, they'd all hidden in the superior bomb shelter in the grounds out the back, rations hadn't affected them due to bootlegging, and Emmaline entertained more men than she ever had. Soldiers on leave, mainly, but one or two Navy men had slipped through the cracks.

The man in Emmaline's room removed his black jacket and white shirt, showing off a puny, hairless chest, his skin alabaster and littered with grey freckles. His prominent ribs reminded Lizzie of a fishing creel she'd seen once when she'd been to Margate on a day out—bowed, the bones uneven.

He walked away from the bed towards the door Lizzie stood behind.

Oh, bugger. If he comes in here to hang his things up, he's going to get a shock to find me in the dressing room...

He didn't, instead draping his garments just so over the back of a chair beside the door. His trousers followed, and Lizzie got an eyeful of his pristine white underpants covering an arse she guessed would feel like skin—covered bones beneath her hands. His spindly legs and knobbly knees were a far cry from Emmaline's usual bedroom partners, and having the man so close made Lizzie uncomfortable.

Maybe the brazen hussy couldn't entice one of her usual types tonight. Mind you, she's probably shagged half of London already. Slim pickings now people have guessed what she's about...

She laughed silently, wondering where the hell Emmaline found the men anyway—where did she go every night to pick them up?—and why they didn't mind a woman so well—used? She'd made a name for herself, she had. To all intents and purposes she was a lady, possibly unaware people hereabouts looked on her as a prostitute pretending she was gentry. And perhaps Emmaline was a floozy. Lizzie had seen male visitors leaving envelopes on the wooden bedside table or trinkets in fancy boxes. Emmaline always opened them when the men had gone, holding a necklace to her throat or hanging a sparkling bracelet over her wrist, and stashing the money in her safe.

Funny, but Lizzie had never seen Emmaline wearing the jewels, nor were they in her mistress' safe. Lizzie was trusted with the combination, having worked in the house for many years, and often pretended she was the mistress, prancing around the bedroom in the gems the woman had purchased herself. She sometimes imagined herself on Emmaline's bed when she made it in the mornings, too, with Johnny between her legs, a lock of his brown hair hanging over one dark eye, breathing unevenly as he gazed down at her.

This was an entertaining short story. The writing was vibrant, and helped keep me in post-World War II England...I give credit to any author attempting to write in a foreign time or place, and Ms. Dae...

Share what you thought about Minute Maid and earn reward points.