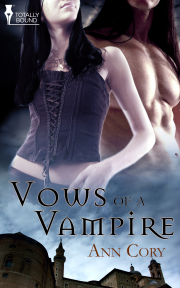 Vows of a Vampire

A promise made. A promise broken. Can love prevail while shrouded in danger?

Varick vows to honour his mentor's last wish, to watch over Aubrey, a woman with a complicated past. Against his better judgment, Varick finds his level of emotions growing for Aubrey each day. But, when an accident nearly takes her from him, Varick has no other choice than to reveal his true identity.

Aubrey finds herself in the company of a dark and seductive stranger, who claims to not only know a lot about her, but also claims to be a vampire. She tries to ignore her instant attraction for him and the way his body makes her weak.

As leader of his clan, Varick must make a choice. Follow his heart, or follow the path set before him. With a growing unease among the clan, his brothers consider a new leader. When Varick's love for a mortal is exposed, he is thrust into a dangerous situation, one that also puts Aubrey's life at risk.

Varick sat in the study, the fire blazing, illuminating a wall of old books. It had been ages since he’d read anything, his mind always filled with too much inner dialogue. He couldn’t remember the last time he’d taken the time to relax.

A quiet knock at the door snared his attention.

The door swung open, and a billow of floral perfume rushed through the room, nearly choking him. There was no mistaking who it belonged to.

Melenge stepped inside, her dark body scantily clad in a short, sheer dress. Her smooth skin reminded him of chocolate silk. Long as he could remember, she’d tried her best to seduce him. She claimed a taste from him would make her feel like a queen. While flattered, his loyalty lay with another, and he wouldn’t betray her.

Hips swaying, Melange approached stealthily, sliding what little clothing she wore off her flawless figure, and stood before him. Eyes averted, he took a deep breath in. At any sign of arousal, his cock would be between her lips, deep-throated.

“Look at me, Varick.” Her breathy voice drifted around him.

To appease her, he bypassed her nakedness and stared into her eyes. Hauntingly violet.

“Only for you.” Never one for subtleties, she looked him over and locked on his groin. “Maybe you didn’t hear, but I’m your prize tonight.”

He smirked. “I’ve won nothing. You know very well I won’t fall for your charms, tempting as they are.”

Melenge knelt in front of him, the glow from the fire highlighting her cheekbones. “Don’t you think me beautiful?”

What an understatement. “You know you’re the most beautiful vampire I’ve ever seen.”

Her bottom lip stuck out. “Then why don’t you let me have my way with you?”

A sigh escaped his throat. No matter how many times he’d explained, she refused to listen. “Because my heart belongs to another. It is the way of things.”

She dragged a long blood-red fingernail along the top of his pant leg and stopped half an inch from his cock. “I can make you forget her in a heartbeat.”

Damn she tested him tonight. “I’m certain you can, but I’ll have to decline your tempting offer.”

Her supple lips deepened into a frown. “I’ve only wanted two men in my life and haven’t had either one. You, of course, and Dante. The way you both keep a woman hanging on, it’s torture.”

A faint hiss resounded from her throat. “Of course I can have them, but they give themselves to me willingly. I crave a challenge. It’s what makes my pussy wet.”

He stood and gestured toward the door. “You won’t find me taking the bait tonight or any other night. Please, enjoy yourself with one of my brothers.”

Melenge retrieved her dress and met him at the doorway. “Very well, but don’t think I’ll stop trying.” She cast him a smouldering glance and made a point to graze her palm along his cock on her way out.

Varick knew she wouldn’t give up. Not while she viewed him as a conquest. It took a strong man to tell her no, but he would continue to. He reserved his passion for one woman only. Someday he hoped to know the soft touch of her skin. Aubrey. The thought of his lips pressed against hers, tasting her sweet, moist mouth, sent shivers along his body. She’d managed to capture his affections without her knowledge. During the day he’d observed her graceful cat-like moves, but it was at night when he suffered mo

When she isn't concocting a magical seduction story, she writes poetry, reads, and spends time with her husband and son playing games and watching movies. She also enjoys interior decorating, cooking and making wine.

Vows of a Vampire is a scrumptious story that takes us into Ann Cory's dark and steamy world which we will want to revisit quite often!

If you are in the mood for a nice vampire romance that hits all the right spots, Ann Cory's VOWS OF A VAMPIRE maybe the story you are looking for.

Share what you thought about Vows of a Vampire and earn reward points.